Russia's attacks on "moderate jihadi" groups appears to be pushing them to consider the possibility of uniting under the umbrella of the Islamic State. 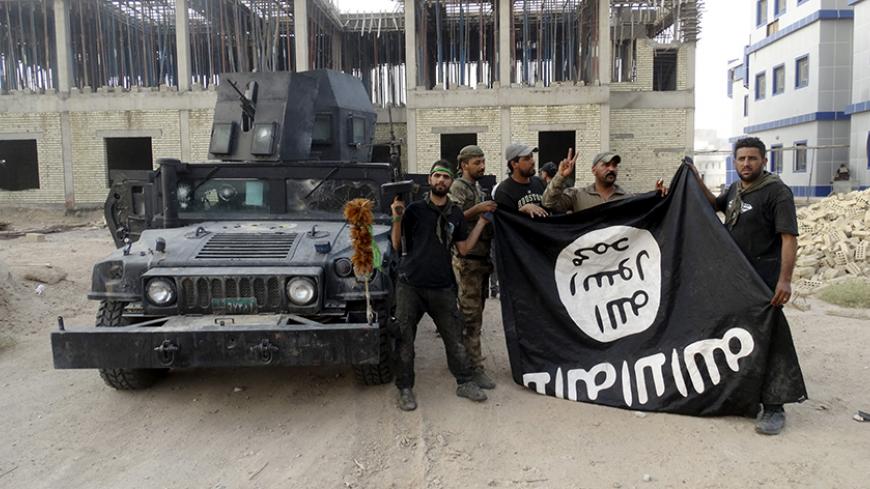 Iraqi security forces hold an Islamist State flag which they pulled down at the University of Anbar, in Anbar province, July 26, 2015. - REUTERS

Over the past two years, military operations in Iraq and Syria have shown the Islamic State to be an effective and lethal offensive war machine. In Al-Monitor in October 2014, I stressed that the effectiveness of IS' tactical offensive capabilities was due to its preservation of operational momentum at all costs and at every level. With Russia’s military intervention and high-paced operations with the Syrian army, the current issue is whether this situation might be changing. International news is laden with optimistic reports and forecasts that IS' offensives are losing momentum, that the tactical military scene is one of stalemate and that with the much-anticipated siege of Raqqa, the end of IS could actually be near.

Many military analysts, however, are warning against underestimating IS' defensive capacity. In “The Islamic State Digs In,” Jessica Lewis McFate does so by examining the situation in Mosul this year. According to McFate, Russian military intervention in Syria and its intention to expand its theater of operations toward Iraq might end up strengthening IS.

Can Kasapoglu, a security analyst with the Istanbul-based Center for Economic and Foreign Policy Studies, also believes the defensive potential of IS should not be overlooked. He told Al-Monitor, “First of all, I don't see [IS] as the primary objective of the current Russian-backed Syrian offensive. Nevertheless, in such a case, we would have to monitor the terrorist group's key tactical hybrid capabilities that could render the regime's as well as the Russians' armor and close-air-support superiorities ineffective. Put simply, given [IS'] advanced military planning, I don't see them maneuvering captured tanks and armored vehicles in open terrain when facing Russian Su-25 aircraft and Hind gunships.”

In short, IS would probably depend on advanced, shoulder-fired anti-aircraft missiles and anti-tank guided missiles, which it has demonstrated it can use proficiently. Its unpredictable methods, especially suicide bombings, could be effective in striking key lines of communication and the rear areas of any offensive launched against it.

Kasapoglu further asserted, “Geopolitically, the major aim of an IS defensive campaign would probably be on pulling the regime, and the Russians, into deeper territory to require logistical support, to reduce air platforms' on-station times and to create targets of opportunity due to overstretched lines of communication.”

To grasp how IS might defend itself in Syria, Al-Monitor spoke in Istanbul with representatives of Syrian “moderate jihadi” groups and Salafi noncombatants who sympathize with IS. Russia’s military intervention appears to have motivated it to formulate two basic approaches. The first is to concentrate its forces at Raqqa and defend the town to the end, as it has in Mosul. Raqqa's importance lies in its spiritual value, as the capital of the Abbasid caliphate before Baghdad, and even more so in its position as the geostrategic junction where all roads in Syria meet. According to Istanbul-based opposition figures, this posture is preferred in particular by the Arab nationalists and former Baathist cadres in IS.

Proponents of the second approach believe it would be a strategic mistake to concentrate forces at Raqqa and instead suggest expanding the front to avoid being overwhelmed and overrun. An expanded front would offer enemy planes fewer concentrated targets and would force the enemy to extend its supply lines, enabling IS fighters to hit behind enemy front lines. Chechen, Turkish, Uighur and Uzbek fighters are advocating this approach. Some of them also back supporting moderate jihadis, such as Ahrar al-Sham, Liwa al-Tawhid, some Army of Conquest factions, the Islamic Front and Turkmen Salafi groups fighting at Aleppo and Latakia.

Other factions have more grandiose goals and question why some 2,000 IS fighters — mostly from Central Asia, Chechnya, Turkey and Turkistan — were killed in a place such as Kobani, which holds little strategic value. They advocate taking the jihad to Central Asia, Russia and Uighur territories and even to Europe and America. In short, the mistake of massing fighters as in Kobani to fight along a static front line made IS fighters easy targets for aerial bombardment.

Among those who favor an expanded front line by giving priority to supporting jihadis at Aleppo, Hama, Homs, Idlib and Latakia is Muslim Shishani, the Chechen leader of the Jund al-Sham, a group of soldiers of Caucasian origin fighting around Latakia. Shishani told Al Jazeera Turk, “Many Caucasian brothers who were in [IS] want to leave and move to the Latakia region. Fronts [such] as Raqqa and Aleppo will have no significance in a ground war against the Russians. The real war will be on [the] Tartus-Latakia front line. Jihad must be moved to that area.”

Those adhering to this mindset obviously subscribe to a more expanded defensive concept. One moderate jihadi, Murat K., who requested that his full name not be used, said the Russian intervention is turning the IS-led jihad into a global one. Murat coordinates a charity organization in Istanbul for the families of moderate jihadis fighting in Syria. “Foreign fighters in IS are openly saying that the mistake of Kobani must not be repeated. We have to unite with other groups in Syria and spread jihad to the entire world, above all, Russia,” he said.

This and similar statements illustrate one hard truth: Russia's intervention and its bombing of non-IS targets is encouraging jihadi groups to identify with IS. In other words, Russia is promoting the formation of a massive, Sunni jihadi coalition under the IS umbrella in Syria and Iraq.

Osman A. is former director of an Istanbul-based nongovernmental organization providing humanitarian assistance to Syrians of Sunni origin. According to him, Saudi Islamist scholars have already declared jihad against Russia, and Al-Azhar in Cairo will soon issue a similar declaration. Russian intervention has erased the distinction between global and local jihads, he claimed.

Ahmet, who asked that his full name not be revealed, is a Chechen moderate jihadi who fought in Syria but returned to Istanbul because of health problems. He shared his perspective with Al-Monitor, asserting, “We are awaiting the US reaction to Russia’s approach of putting [IS] and all moderate jihadi groups into one basket and labeling them terrorists. It is obvious that the US is still confused about the issue and can’t decide what to do. If the US declares all moderates terrorists, as Russia does, and takes them on militarily, then everyone will unite under the [IS] banner.”

Will IS decide to defend Raqqa to the end or to take the war to Aleppo, Hama, Homs, Idlib and Latakia or to expand the fight to the wider world by uniting moderate jihadis? The IS leadership has not yet decided which course to take because it first wants to see if the United States will stand with Russia. If IS can defend Raqqa against a Russian offensive, aid moderate jihadis in western Syria and then spread conflict outside Syria, its ideology could emerge as the dominant force, even if militarily degraded, triggering a global Sunni mobilization in support of it.