Sochi Olympics give boost to Circassian identity in Turkey

Turkish Circassian activists are opposing the Olympic Games in Sochi, Russia because of Russia's historical maltreatment of Circassians. 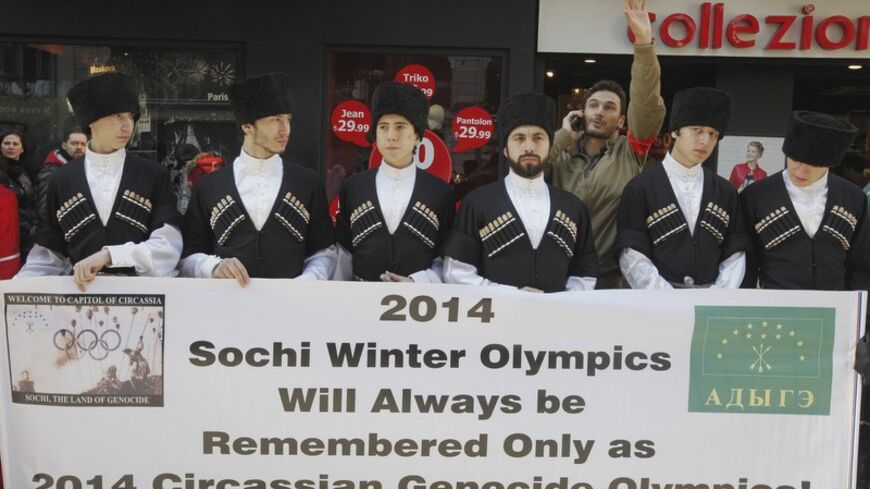 Circassians living in Turkey gather in front of the Russian Consulate to protest against the 2014 Sochi Winter Olympics in Istanbul, Feb. 2, 2014. - REUTERS/Osman Orsal

ISTANBUL — The upcoming Olympic Winter Games in the southern Russian resort of Sochi have invigorated a movement of ethnic Circassians across the Black Sea in Turkey. Activists say their campaign against the Games, which kick off on Feb. 7, has politicized ethnic Circassians in Turkey for the first time.

Between 2 million and 5 million Turks trace their families’ origins to the Caucasus, which was partly ruled by the Ottoman Empire before Russia established its hold there in the 18th and 19th centuries and pushed out Muslim Circassians.

Sympathies for Circassian and Chechen causes remain strong in Turkey. Chechen and pro-Chechen Turkish activists in Turkey have staged several spectacular attacks to draw attention to their cause. In 1996, activists hijacked a Black Sea ferry, and in 2001 and 2002, others held guests in two five-star hotels in Istanbul hostage to protest against Russia’s military campaigns against Chechen rebels.

But for most Turks with roots in the Caucasus, those headline-grabbing incidents did not translate to more political action. Activity in Circassian associations in Turkey was “mostly folklore,” Ozgur Aktekin, an engineer and Circassian activist in Istanbul, told Al-Monitor. It took the decision by Russian President Vladimir Putin to stage the Olympic Winter Games in Sochi to change that, he added. “By moving the Games to Sochi, Putin gave the movement new dynamics,” Aktekin said.

Kuban Kural, another Caucasian activist in Turkey, called the decision for Sochi a “historic turnaround” for Circassians.

Protesters in Turkey have held regular vigils in front of Russian diplomatic missions to protest against the Games, which will take place 150 years after what Circassians call a "genocide" by Russia against their people.

On May 21, 1864, Russia’s army completed its conquest of the Caucasus. Circassians say up to 1.5 million of their people were deported, hundreds of thousands of whom died on the way. Most survivors settled in Anatolia, while others ended up in Syria, Jordan, Israel, the United States, Canada and Western Europe. Anti-Russian demonstrations are held in several countries every year on May 21.

“No Circassian wants the Games to go ahead in a place where the bones of his forefathers are buried,” Dogan Duman, a member of the Federation of Caucasian Cultural Associations in Turkey, told a Turkish television interviewer. He said he supported the idea of Olympic Games in general. “But I cannot accept that they are being held on the grave of my grandparents.”

Kural told the Turkish-Armenian Agos newspaper that the Olympic Village in Sochi was built in an area where many Circassians were killed by the Russians. He said the No-Sochi movement, which has been campaigning against the Sochi Games worldwide, had its origin in Turkey. The decision to hold the Games in Sochi created a new sense of identity for many Circassians, he added.

Deadly bomb blasts in the southern Russian city of Volgograd in December heightened security concerns for the Games. Russia says it will deploy tens of thousands of police officers to protect athletes and the public.

But Circassian activists in Turkey insist they reject violence as a means to promote their goals. “Putin is calling us terrorists, but that is just a tactic to marginalize Circassians,” said Aktekin. “We use arguments, which are Russia’s weak spot.”

Aktekin cited the case of Turkish journalist and Caucasus expert Fehim Tastekin, who was denied entry into Russia when he flew to Sochi last year. “That’s how afraid they are,” he said about Russia’s authorities. Tastekin writes for Radikal newspaper and also Al-Monitor.

Aktekin and others also say Caucasian activists in Turkey are being followed — sometimes harassed or even killed — by Russia.

Last year, Medet Onlu, a pro-Chechen activist and businessman in Ankara, was killed in his office by unknown gunmen. His death came on May 22, one day after the anniversary of the completion of Russia’s conquest of the Caucasus. Activists are convinced that Russia was behind the murder. Moscow “and collaborating governments” had Onlu killed, Imkander (a Turkish group supporting refugees from the Caucasus) said in a statement at the time. Kural, a Chechen activist, has been given Turkish police protection.

Aktekin admitted that Turkey’s government, keen to maintain good relations with Russia — an important international power and crucial energy supplier for Ankara — has ignored Circassian calls for a boycott of the Sochi Games. Turkey is to send six athletes to Sochi.

But Aktekin said the failure of the boycott campaign was more than offset by other gains.

“We have won so much more,” he said. “People have seen that there is this movement,” he added. “We have gained our own identity; we have gained means of communication, of reaching the public and the media.” He predicted that the Circassian movement would not disperse after the Games. “Crimes are still being committed over there.”

As for the Games themselves, activists like Aktekin are looking for access to athletes to provide them with documents about the alleged genocide against the Circassians.

In the long run, the movement is campaigning for international recognition of what it calls the genocide of 1864 and for an eventual return of exiled Circassians to their former homeland. “That will be difficult,” Aktekin conceded.