After months of accusing each other of treason, rival Lebanese camps formed a unity government to fight the growing terrorist threat. 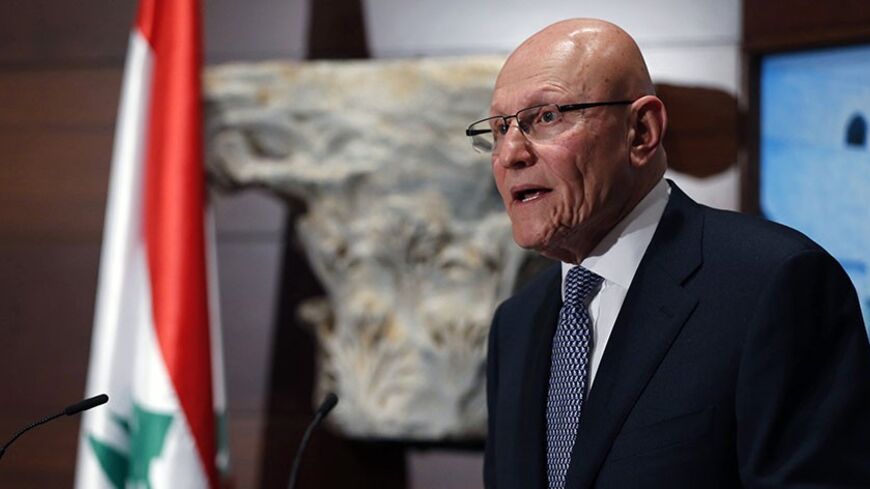 As if by magic, common national interests suddenly took priority over factional interests. The quarreling Lebanese parties made mutual concessions and joined the same government. They forgot, or pretended to forget, their past differences. They abandoned slogans that for a long time were considered sacred.

They accepted yesterday’s enemies as partners after they hurled insults and accusations of treason against them. But the question is what caused this sudden change of attitudes? How can something that was forbidden and cursed suddenly become acceptable and good? Why didn’t that happen months ago and save the country's paralysis, economic harm and lost opportunities for Lebanese of all sects.

A government was finally put together in Lebanon after more than 10 months. A government of “national interest” was formed. After its inception, it was remarkable how many from the rival political camps objected. Supporters of the March 14 movement criticized its leadership for implicitly accepting Hezbollah’s participation in the Syrian war. Hezbollah’s public was angered when it saw March 14 hawks grab high-level ministries — such as the Ministry of Interior and the Ministry of Justice — and was not told why its leadership accepted a surprise settlement with its rivals after it had promoted the idea that the March 14 movement shelters terrorists, which have conducted several attacks.

The importance of the composition of Lebanese governments is not in their economic or social programs, which do not change much over time and only a small portion of which gets implemented, if at all. Many of those programs move from one ministerial statement to another without ever seeing the light of day. The importance of Lebanese governments is that they reflect a regional power balance and what is going on in diplomatic corridors: settlements that have been implemented, are being prepared or are being tested.

So what happened? What is behind the government settlement? The answer lies in three words, which can serve as the new government’s mandate: “confronting jihadist terrorism.” There was a convergence of necessities that led to uniting against a common enemy. The final word came from abroad, regardless of the claims about the role played by internal players.

At a very delicate moment, the interests of the United States, Russia, Europe, Iran and Saudi Arabia converged on one goal: fighting the expansion of extremist organizations. It is true that some of these organizations are the product of intelligence services of states with effective influence and history in the Middle East. It is also true that several political parties have their own “extremists,” or at least their own “Islamists,” working for them. But it is also true that each of these parties have an interest in portraying themselves as fighting extremist terrorism, or at least as a guarantor standing in its way.

Iran and Russia have tried hard to convince the world that the priority should be to face the extremist threat. They did so to the point of portraying the Syrian crisis as only about that issue, and they diverted the Geneva II conference away from the intended track.

Ahead of US President Barack Obama’s visit to Riyadh planned for late March, Saudi Arabia has initiated a series of measures designed to fend off the rising wave of extremism. Earlier this month, the Saudi king issued a decree prohibiting “jihad in Syria.” The Free Syrian Army and the forces allied with it and backed by Saudi Arabia have fought the Islamic State of Iraq and al-Sham (ISIS) and Jabhat al-Nusra in Syria.

In Iraq, there have been signs of US-Iranian rapprochement on this issue. Specifically, the United States announced in January that it would provide military aid to the Iraqi army, to enable it to counter al-Qaeda and its derivatives. Iraqi Sunni tribes did not line up behind Prime Minister Nouri al-Maliki’s decision to launch military operations in Anbar, but neither did they support the al-Qaeda groups. So rival sides in various Middle East hot spots came together to fight a common enemy.

Regional powers found common ground regarding Lebanon, after extremist terror struck the country and after they got information that al-Qaeda was expanding to parts of the north. Rival Lebanese camps saw that they must unite to confront this danger, which is an existential threat to both Hezbollah and the Future Movement, albeit according to different measures.

All other issues are still contentious; from the dispute over Hezbollah’s arms to the latter’s refusal to accept the Baabda Declaration — which requires everyone to withdraw militarily from Syria — to the dispute on how to deal with the Special Tribunal for Lebanon, to which Hezbollah refuses to hand over five of the accused.

Those contentious issues did not prevent the meeting of opposites. On the ninth anniversary of his father’s assassination on Feb. 14, [former Lebanese Prime Minister] Saad Hariri made a speech stressing the ongoing conflict with Hezbollah. He listed several differences with the party using a very emotional tone. But he stressed that he rejected his Sunni current joining the extremist wave and underlined the moderation of his movement.

Moderation was a main message in his speech. It was as if he was saying that the Future Movement’s moderation is the real guarantee against extremist groups, and whoever is harming moderation is responsible for the growth of religious fundamentalism. The day following the speech, on Feb. 15, the new government was formed.

What Hariri did not say was said by Hezbollah Secretary-General Hassan Nasrallah on Feb. 16, after the government's formation. Nasrallah stressed the evil represented by extremists and the need to confront them. Hezbollah accepted that its rivals get a share of the government on this basis. It was remarkable that the March 14 movement obtained a significant share in the new government, especially the security ministries: the Ministry of Interior, Ministry of Justice and Ministry of Communications. It was remarkable that Hezbollah agreed to that. The current phase requires “moderation” to be at the forefront.