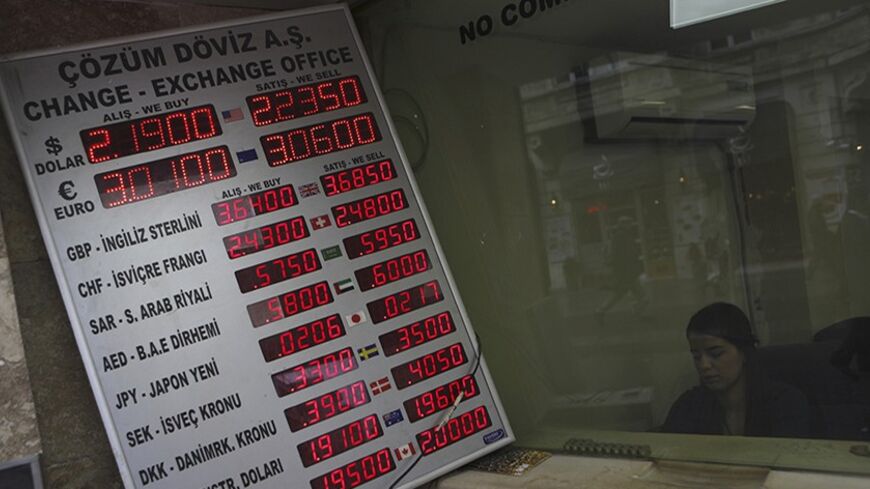 Foreign exchange rates are displayed on a screen outside an exchange office in central Istanbul, Jan. 29, 2014. - REUTERS/Murad Sezer

At midnight Jan. 28, members of Turkey’s Central Bank Monetary Board gathered for an emergency meeting — three weeks earlier than their scheduled gathering — and decided to aggressively increase a series of short-term interest rates, including the repo rate, which went from 7.75% to 12%. The goal was to bolster the weakening Turkish lira against the US dollar.

“It didn’t take the market long to realize that the Turkish Central Bank did not over-deliver on any account at its emergency meeting compared to expectations,” Abbas Ameli-Renani, an emerging markets analyst at Royal Bank of Scotland in London, told Al-Monitor. “The actual rate hike was in line with consensus, despite the headlines, and the Turkish Central Bank did not deliver a meaningful simplification of its monetary policy framework compared to what it was until just two weeks ago.”

Ameli-Renani added, “The Turkish Central Bank’s decision at the emergency meeting was not politically smart. In my view, they should have just hiked the lending rate and left the repo rate unchanged. The market would have accepted this as a hike, whilst [Turkish Prime Minister Recep Tayyip] Erdogan would have been able to sell the decision to [ordinary people on the street] as 'no change,' given the repo rate was commonly referred to as the policy rate. That could have been win-win. But the decision of the Central Bank … was 'at best' a win-lose for Central Bank-Erdogan, and of course, Erdogan won’t react kindly to a loss, especially given this price action. … [This] decision will likely add a new front to the political unrest.”

The fact of the matter is that the Central Bank hiked the short-term interest rates for political concerns, as a weakening Turkish currency against the US dollar always carries a risk at the ballot box for any Turkish government since it signals high inflation rates and economic instability. As the dollar’s value was hyped, the market speculated whether it would pass the 2.5 lira threshold, which would be psychologically damaging for the ruling party. After all, the Erdogan government has claimed credit for the country’s economic prosperity as it successfully evaded the global economic crisis.

It may only be in Turkey that a government under a serious and significant corruption probe does not risk losing elections. The political climate here does not signal defeat for the ruling Justice and Development Party (AKP) — if the elections were to take place today. All this could change based on the barometer of the market.

The international rating firm Moody's warned on Jan. 31 that high inflation and a sharply weakening lira could damage financial stability. “While the Central Bank’s action contains the country’s currency volatility, reduces financial stress in the economy and thus limits the likelihood of a balance-of-payments crisis, it comes at the cost of significantly weakening Turkey’s economic growth prospects,” read a Moody’s statement. Analysts in the Ankara beltway speculate that this could change Turkey’s outlook to negative.

“I expect the lira to remain under pressure from here,” Ameli-Renani told Al-Monitor. “The Central Bank’s next action will be to resort back to ad-hoc policy measures to tighten the effective funding rate toward the 12% lending rate, before it once again considers conventional rate hikes.” He added, “I don’t buy the capital controls story for Turkey — it would simply be too damaging for the economy and definitely not an election winner. The Central Bank and the government may just have to accept a significantly weaker currency.”

“I would like you to know that, as always, I am against a hike in interest rates. But of course I don’t have the authority to interfere with the Central Bank,” Erdogan said on Jan. 27. Despite that, it was clear that the Central Bank acted according to the prime minister’s will, aimed at keeping the dollar under control as the local elections quickly approach on March 31. It is, however, anybody’s guess how the markets will hold off until then.