The suicide bombers who have been striking Iraqi pilgrims are motivated by jihadist ideology. 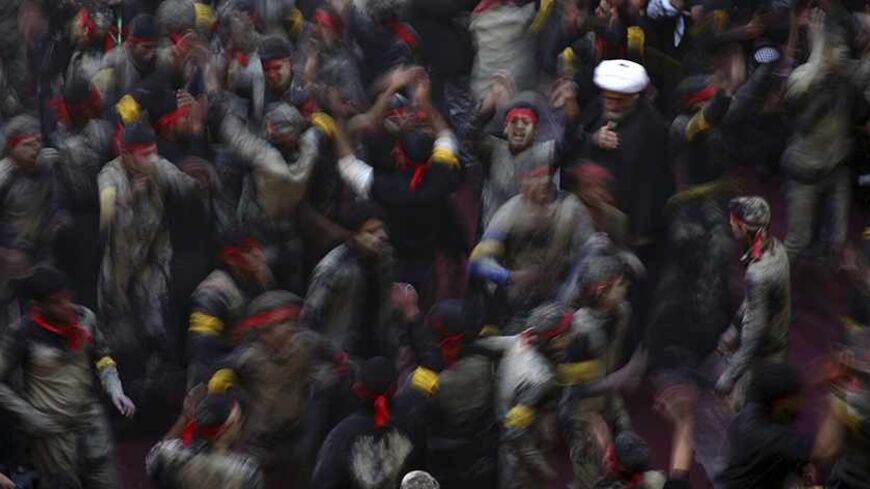 Shiite pilgrims beat their chests in a ceremony to mark the religious ritual of Arbaeen, Karbala, Iraq, Dec. 23, 2013. - REUTERS/Ahmad Mousa

A suicide bomber walks into a crowd of pilgrims going to the city of Karbala, which Iraq’s Shiites consider holy, then blows himself up among the crowd by pressing the detonation button on his explosives belt while shouting “Allahu Akbar” [God is the greatest]. The loud explosion shreds the victims’ bodies.

Because of strong security measures, the suicide bomber has become an alternative to the car bomb. He can easily infiltrate a crowd and is hard to detect.

Police Capt. Imad al-Khafaji, who heads a police station south of Baghdad, where a suicide bomber killed dozens of pilgrims on Dec. 19, told Al-Monitor, “The biggest challenge facing the religious processions at various occasions is the suicide bomber,” pointing to the difficulty of “identifying the perpetrator and the details of the suicide operations, except through the accounts of the survivors, most of whom would be in a state of terror due to the explosion.”

Khafaji admits that “having tight security measures without modern detection technologies cannot stop the attackers. … The bomber managed to quietly sneak into the center of the crowd by using side passages and by sneaking between the dozens of soldiers deployed around where the blast took place. … Those who were nearby give different accounts of what happened. But the heart of the matter is the shredding of the suicide bomber’s body after detonating an explosive belt that killed dozens around him.”

Hussein Abdullah, who lost his older brother in another suicide bombing on the same day in the religiously mixed Dora area amid crowds of pilgrims, said that he had been inside the structure where the explosion occurred but came out to bring some water to his ailing brother. So Hussein survived the explosion with deep wounds to the face and chest.

He spoke to Al-Monitor about that day: “Everything was normal. Nothing made us suspect the presence of a suicide bomber.”

Because of the large number of pilgrims going to Karbala, particularly from cities south of Baghdad, the central Euphrates operation set up a plan to fight the terrorists. But that did not prevent suicide bombers from infiltrating religious processions.

In a discussion with Al-Monitor, Iraqi writer and journalist Abdul Amir al-Majar said, “The culture of suicide, which wasn’t known in Iraq, is a new [jihadist] trend that has swept the Arab countries. Some young Arabs are being influenced by this distorted model and lured under the pressure of various feelings. But any political or ideological disagreement, regardless of how significant, cannot justify a man blowing himself up among innocent people just because he disagrees with them ideologically, unless such a person has been brainwashed.”

Journalist Jawad Kharsan told Al-Monitor that the increasing numbers of suicide bombers are due to “brainwashing, whereby religious fanatics consider suicide operations a legitimate method to reach their goal. For ideological reasons, they call [such operations] 'martyrdom operations.'”

The suicide bomber often disguises himself as a pilgrim going to the holy city. He carries the appropriate “religious” flags and banners. Then he mixes into the crowds of pilgrims and detonates himself. His motivation is to achieve “redemption” and accelerate the sublimation of his soul to “paradise” among the saints and the righteous.

The general characteristic of suicide bombers in Iraq over the years is that they are “jihadists.” Published interviews with them show that their motives were purely ideological. But others choose to kill themselves for material purposes and out of ignorance, with ideology being a lesser motivation.

For his part, writer Jabbar al-Kawaz, speaking to Al-Monitor, said that suicide operations are due to “the sectarian education on both sides of the political and sectarian quarrel, in conjunction with the deepening feeling of abandonment and despair experienced by young people.”