In an interview with Al-Monitor, Usaid Barho, a teenaged suicide bomber dispatched by the Islamic State, tells of his odyssey from an Aleppo mosque to the gates of a Shiite house of worship in Baghdad wearing an explosive vest. 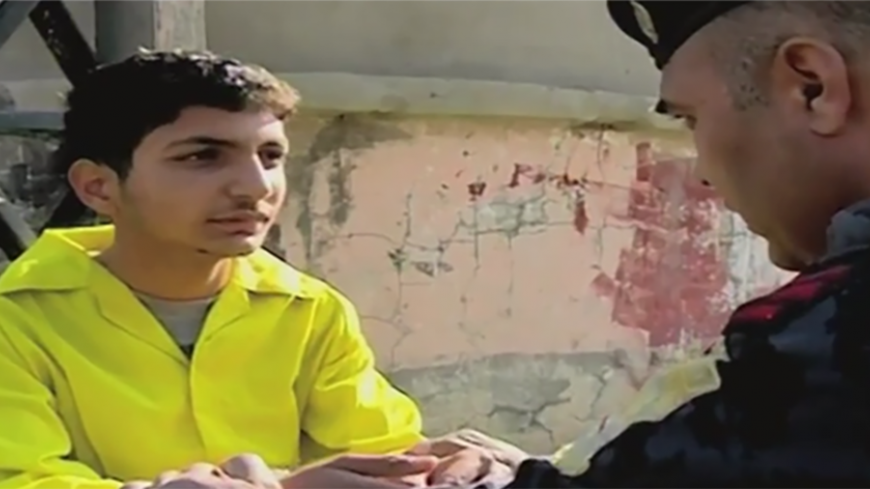 Usaid Barho is shown with a security officer in this still from an Iraqiya TV video, Dec. 26, 2014. - Iraqiya TV

BAGHDAD — Not every suicide bomber gets a second chance at life. Either he detonates himself, killing others along with himself, or he gets arrested and is executed. Usaid Barho, a 14-year-old Syrian and would-be suicide bomber for the Islamic State (IS), appears to have gotten this rare second change after sparing the lives of the Shiite worshippers he had been sent to kill at the al-Bayah Mosque in Baghdad.

“I was supposed to detonate myself inside the mosque. That's what they wanted me to do,” Usaid told Al-Monitor. “Three men from the Islamic State drove me to the main street near the mosque. Two left while one guy accompanied me to a place close to the entrance. He told me not to detonate until he was far enough away.”

Usaid walked to the entrance, where he met Sayyed Ali, a policeman assigned to search people for explosives. Ali, in his late 30s, explained to Al-Monitor how the whole thing happened.

“As he came closer, I tried to search him. He grabbed my hand and said, ‘I’m a suicide bomber. I’m a Muslim and don’t have any intention to kill Muslims. I want to go back home to see my mother. Can you help me?’ I told him, ‘I’ll do whatever you want. I’ll even take you to the airport, but please sit down and let us defuse the bomb.’ I called by bosses, and they came and took him.”

The policeman, concerned about what had happened to Usaid, asked if I had met him and whether he would be sent back to his family. “He seems a nice guy, not a real suicide bomber. I felt as if he were a son of mine,” said Ali, standing in front of the same mosque working security. “When he handed himself over, I was afraid it was a trick, but I didn’t have many options. With each move he made, I was afraid he was going to go ‘Boom!’ It’s not a joke. Some of them put the real explosives in their underwear, down where no one is going to touch them.”

Ali further elaborated, “What helped end the minutes of fear is a guy from the popular mobilization forces. He was trained in defusing bombs. He came and started working on [the suicide vest]. Imagine. All the wires were red. That made it hard, but God helped him.”

I met Usaid at one of Baghdad’s fortified jails. As much as he is shy, he also seemed clever. All he could think about was getting to Turkey to see his mother. “I haven’t seen her for two months. I miss my mom a lot, but I’m afraid now that the news is everywhere, they’ll harm my family,” he confided.

Wearing a yellow uniform over a black shirt and gray trousers, Usaid was fasting the day we met. He seemed friendly with the guards, saying of them, “They dealt with me in a nice way. They asked, I answered. Now I’m praying for securing a release so that I can enroll in school again.”

I interrupted Usaid to ask about his educational plans. “I want to be a doctor. After what I saw, I want to help people live. I know this is a second chance for me to live, and I want to live it and be helpful. It’s the best way to go to God’s paradise — by making people live rather than killing them.”

How did such a young boy end up in the ranks of IS and become a suicide bomber?

“I used to attend prayers at the mosque and became a fan of [IS] when I heard about them and their efforts to build a strong Islamic government,” Usaid said. “I decided I wanted to join them and spoke to the guys at the mosque in Aleppo. Later, I was sent to Idlib to officially join and then to Hama, to the training camp.”

At the camp, Usaid developed a different understanding of the group. “They aren’t like what they say. They aren’t good Muslims. Many of them didn’t pray, but the emir didn’t care. He always said he would punish them, but he never did. All he wanted was to prepare us to kill as many people as possible. I started thinking of a way to escape, but there was none.”

Later Usaid and a group of his comrades were sent to Raqqa and then to Mosul, in Iraq, where they were asked to choose between becoming fighters or suicide bombers. Usaid said, “I decided the best thing to do was to become a suicide bomber. I’d be able to hand myself in to the authorities without having to face the risk of being killed. As a fighter, I wouldn’t get such a chance.”

Usaid and other suicide bombers where transferred from Mosul to Fallujah and from there to Baghdad. “The person responsible for us took us to a flat in Baghdad, where we were later given the suicide vests to wear and sent with the men to launch our attacks,” he said. Usaid had already developed a scenario in his head, and when he arrived at his target, he succeeded in following it.

“It’s why I’m now here. I don’t want to kill Muslims. I was told they [Shiites] are kaffirs, but to my surprise I found them praying. I didn’t want to detonate myself whatever they were, but I was surprised that they pray.”

Usaid had not had the opportunity to contact his family, but he believes they know of his story and that his mother is waiting for him. “I want my mother to forgive me. I know how much she loves me, and I let her down. I want to go back and stay under her feet.”

Al-Monitor tried to contact Usaid’s family in Menbej, Syria, via the Internet. Someone from his extended family, not a direct relative, responded, saying, “We know nothing about this young man,” adding that he would do his best, however, to find out whether Usaid’s immediate family was still in town or had left for Turkey.

The officer who led the investigation into Usaid said the boy had helped uncover an IS safe house in Baghdad. “After he handed himself over, I drove him in my car, along with another officer. I bought him lunch. We ate together in the car, then I asked him to show me the place where he had stayed.”

According to the officer, they had to circle two or three times until Usaid recognized the place. “We arrested two people who were suicide bombers [and found] 8 bomb belts and many important documents. He was helpful all around.”

The officer said that since Usaid had voluntarily turned himself in, and given his age, it was most likely that he would be set free. He added, however, “But this is not our decision in the end. Let’s leave it to justice, but we want him to go back to his family and set an example for others like him that it’s not too late to give up terrorism.”

Why are Iraqi authorities giving such unprecedented media access to the Syrian, teenaged suicide bomber? An official source told Al-Monitor that it is part of a new strategy aimed at showing the other side of the coin. “It's a message to us before being a message to others, to our security personnel, to the people, to the terrorists and to the West. Every case is a special case, and this one in particular should be inspiring." The source added, “The world has to see what kind of people the terrorists are. They are exploiting children."

Yet, all this can also be viewed from another angle. The government here in Baghdad is trying hard to leave the impression that things in the post-Nouri al-Maliki era have changed. Perhaps this is a start, though much more needs to be proven.