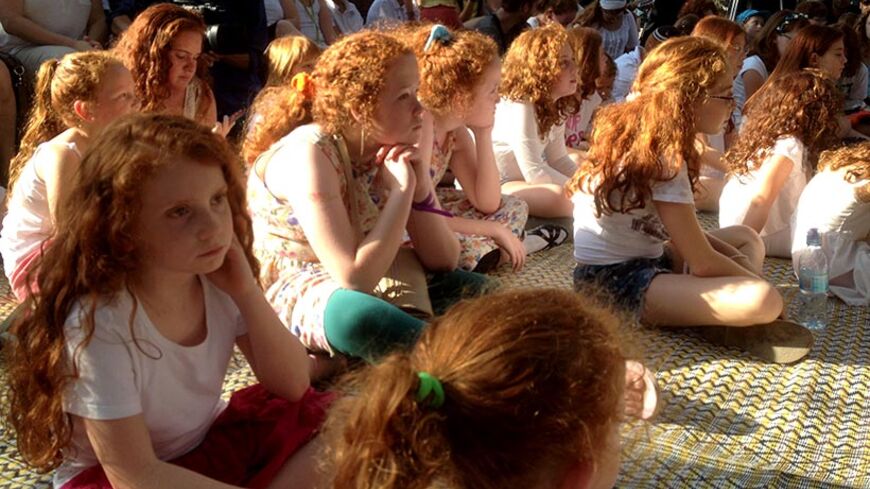 With that joke, Ofri Moshe, a sweet 9-year-old redhead, opened Israel’s first conference for gingers, an event that she initiated and organized. Some 200 redheads from across the country registered in advance — a requirement made by the Home Front Command — to participate in this special event on Aug. 28.

“Next year,” Ofri said at the end of the event, “we’ll organize a gathering that is open to everyone.”

Then, all 942 people who expressed their desire to attend on the event’s Facebook page could actually show up. This year, most didn’t make the 200-person cutoff. Even after the cease-fire was announced on Aug. 26, the limit on the number of participants was not lifted, much to the chagrin of many redheaded Israelis. “Is there any chance that the event will be open to everyone now that there is a cease-fire?” wrote Nir Amichay on Facebook. “There are a lot of disappointed redheads out there who would love to take part.”

Ofri was inspired to launch this special convention after hearing about the famous conference for redheads in the Netherlands. She was unable to attend, so she decided to organize a similar event in her home of Kibbutz Gezer. “I said to myself, that's a great idea,” she said, and then, “I bugged my parents about it until they realized I was serious.”

In the end, Ofri’s project took off and became a reality. Yes, the event was amateur, but the mood was polished and refined. Given Ofri’s energy and charisma as event moderator, it was obvious she enjoyed the attention.

It was a lively event, and often funny. Together with her mother Meirav, Ofri led the artistic session, which began, of course, with the popular Hebrew children’s song, “I’m a Redhead.” From there it continued with the “Giness World Records,” which Ofri explained was “like the Guinness Book of World Records but for gingers.” It included the redhead with the longest hair (measured using a carrot); the person with the most freckles; the oldest redhead (Esperans, 82, who was born in Iraq, and who excitedly told the audience, “Never dye your hair!”); and the youngest redhead (David, 1, named after the most famous biblical king and redhead, of course). Then there was a carrot-sharpening contest, using a special sharpener, and a bagpipe performance as a tribute to Scotland, home of the redheads.

One young woman said that she came to the gathering “to find a redheaded Jewish husband, preferably a Chabad [Hasidic movement] follower.” It’s hard to imagine that she found one, if only because so many of the participants were children. Some parents explained, “We wanted them to see other children who looked like them, so that they’ll be like everyone else for a moment.” Those children, however, don’t seem to be suffering because of their red hair. Sure, there are stereotypes and insulting nicknames, but most of the kids there said they were proud to be redheads. It is actually their parents who have the painful memories.

The Koniak family brought three generations to the event. Grandma Malka, who encouraged everyone to attend, said, "I suffered a lot. In school they called me ‘Malka the Ginger’ [in Hebrew, 'ginger queen'], with a negative connotation. After years of being looked down on, I wanted them to have an experience that will strengthen them instead." When her grandson Tom, 9, said he is called “Red Tom,” his mother Sharon was quick to add, “I think it’s a nice nickname.” Tom changed the topic: “The only thing I agree with is that redheads get angry easily. I really do get angry too quickly.”

Plenty of parents actually do complain about a frenetic energy. Ayelet Helerman, the mother of Alon, 10, said that in their house they often use the code words, “Danger! There’s an angry redhead in the house.”

Mirit, 17, and Sigal, 15, are redheaded sisters from Jerusalem. “It’s true. We really do get angry,” they said, but note that despite their hot tempers, they aren’t bothered by all the red in their lives. “People will always reference the color, but it should be taken with a grain of humor and good fun. My nickname is ‘Sweet Ginger,’” said Sigal. “And mine is ‘Beloved Ginger,’” said Mirit.

Tom, Sigal and Mirit are the only redheads in their schools. Statistics show that redheads are becoming increasingly rare, which may be why they are showing so much pride. Alon Helerman, for instance, is very proud of his orange hue. “I raised him to take pride in it,” said his mother Ayelet. “It’s true that I always tried to hide it about myself, but when Alon was born, he liberated me.”

Alon really is proud. He first learned of the event just a day before it was supposed to take place. When he heard it was invite-only, he didn’t give his parents a moment’s rest until they managed to finagle him an invite. On the morning of the gathering he made special shirts for himself, his mother and Ofri, with the slogan, “Redhead is a state of mind.” He plans on celebrating his bar mitzvah three years from now at the redhead conference in the Netherlands.

Danielle Nayer grew up in the United States, where, she said, she was subjected to nasty names. Some of these were unpleasant. “I’m not worried that it might happen to my children, too. I’m sure it will happen to them. It’s the first thing that people will notice about them. That’s what they’ll laugh at. But there’s also something good about it. It means that people won’t laugh at anything related to their true inner beings.” Her children, Nes, 4, and Max, 3, are fourth-generation redheads and absolutely beautiful.

As the event came to an end, some shouted, “Redhead selfie! Who’s in?” Ofri closed the conference with a brief speech, saying, “Let’s hope that this becomes a tradition.”

“Hold on a minute,” someone shouted from the audience. “When do we take over the world?”