Residents of Umm al-Fahm say that, regardless of their affiliation with the Palestinian cause, they identify themselves as Israeli citizens and object to a land-swap plan that will annex them to a future Palestine, as Israeli Foreign Minister Avigdor Liberman suggests. 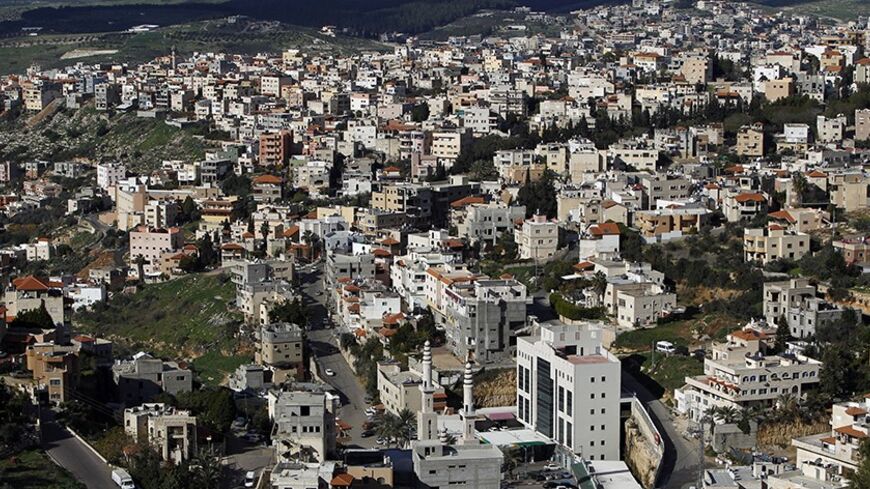 In the villages and towns of "The Triangle" — where several Arab localities are concentrated (including Umm al-Fahm, Taibe, Tira and Kfar Kassem) — the talk of the day revolved around Foreign Minister Avigdor Liberman's statement only. The statement, in which he proposed to transfer the towns and villages of the Wadi Ara Triangle to the Palestinians, caused an uproar. Even though many people are convinced that there is no chance in the world that Liberman’s program will be implemented, the sense of anger and insult are enormous. Especially since they did not hear anyone condemn this proposal: not Prime Minister Benjamin Netanyahu, who they believe probably supports his foreign minister’s plan; and not even Israel’s left-wing movements.

Suddenly, about 300,000 residents of the Wadi Ara Triangle, and the rest of the Arab citizens of the State of Israel, understood that not only is their loyalty shrouded in doubt but also their very citizenship.

In this article I quote the responses of people from Umm al-Fahm, one of Israel’s largest Arab cities (about 50,000 residents).

Wisam Agbariya is the city’s deputy mayor and a member of the Balad movement. Agbariya acknowledges that all the city’s residents found Liberman’s proposal to be extremely disturbing, but he himself feels that it cannot be carried out. “What, they already resolved the issues surrounding refugees and Jerusalem and the Jordan Valley and the only issue to argue about is Umm al-Fahm? Television crews are coming to the city, they photograph unemployed workers in coffee shops who say, 'Let us be,' 'Don’t do this to us.' I don’t call this a display of allegiance but of sycophancy. It is a hallucinatory proposal, just as populist as Liberman’s other suggestion of blowing up the Aswan Dam. All he wants is to pacify the right-wingers and his supporters. How can a country that is viewed by Europe as 'advanced,' tell a segment of its population that it does not want them? Is this the true face of the State of Israel?”

You define yourselves as Palestinians. If so, what is the problem of being part of the future state of Palestine?

“I admit that I feel Palestinian, but I do not feel that the day of liberation has arrived. I don’t want to undergo another Nakba. For 65 years, part of the Palestinian nation has been formed here, let’s call it a population group under special conditions. Now you come to harm us again? To turn us into a bargaining chip? To exchange us for the settlers who settled on lands that are not their own, and some of them in illegal outposts? We are equivalent to those groups in an exchange deal?”

Ahmed Machmid, a bookkeeper and nursing student, is the father of two daughters. “I am worried what will be if it does happen,” he says, “What will be with us? How will we live? How will we become part of a state that has not been established yet? And if it [a Palestinian state] is established, that will be the beginning of our destruction. How does a country that calls itself democratic, dare to expel 300,000 people? Are we supposed to be the victims of this peace?”

Didn’t this proposal create an identity problem for you? After all, you’ve always said, 'We are Palestinians.' Here is your chance.

“It is annoying and depressing. There's no doubt that the State of Israel is the strongest country in the Middle East and everyone wants to live here. I was born here and am connected to the country economically, socially and emotionally. Why am I responsible for the antics of Knesset members [Azmi] Bishara or [Ahmad] Tibi? They don’t represent me, and I tell you that they also do not represent the majority. Go out to the street to talk to the people and ask who is willing to become part of the Palestinian Authority. No one.”

What would you do on a personal level, if the program is carried out?”

“If they expel us, I won’t live in a Palestinian state; I’ll emigrate abroad. Just imagine, all the laborers working in Jewish cities will suddenly lose their livelihoods. Who will support them? Just imagine what kind of unemployment will prevail. I am in favor of peace and I want there to be peace and that the Palestinians will have a state of their own, but as far as I am concerned, my country was established in 1948. This is my country, I was born in this country. What is the problem with Arabs also living in the Jewish state?

“I am a complex mixture of belonging to the Palestinian nation as well as to the Israeli culture in which I grew up,” says Khaled Pauwer, father of two children. “What should I give up on? You know what, I’m Israeli. Sometimes I visit Jenin, sometimes Ramallah and I see a different mentality there, different culture, different people. I don’t belong to Palestine, I am Israeli — in my opinions, my thoughts. Do you know what my wife says? That we should move to Nazareth, maybe it won’t catch up with us there. What can I tell her, that it’s impossible to escape?”

What did you tell your children?

“My children made a joke out of it. There are some [Palestinian] children from the territories who sold sweets and Band-Aids in the [Israeli] Arab cities so my kid said to me, 'Dad, I am going to sell things, get the stuff ready for me.' As a father, how will I explain to them? That maybe we’ll become like those children who come from Tulkarm and Jenin to beg for alms? What will I tell the child, that we won’t have a livelihood? That his mother, who is a teacher in a school, would no longer be able to teach in her school?”

Perhaps you brought this on yourselves? Sometimes the Palestinian flag is waved in your parts.

“There is a handful of people who champion the Palestinian nationality, they are the minority. Knesset members such as Tibi do not at all represent me, and many others feel that way, too.”

Another resident, Muhamed Machamid, says, “They won’t accept us there in the [occupied] territories because they don’t like us. It will take years and years until we become integrated there, economically and socially. I believe that there will be riots. Just imagine 300,000 people whom you uproot from their land. You get them angry, they’ll be on the lookout for the State of Israel, they’ll want to take revenge. Israel will create an enemy for itself, an enemy from within. You know what else distresses me? Never mind about Liberman and his foolishness. But where are the left-wing parties? The Labor and Meretz Parties did not even open their mouths.”

One of the city’s residents (who asked that his name not be publicized) told me that he approached several residents of the city known for their extremism, and said, “Why are you worried? Why do you look so downcast? They’re not talking about transfer, but about a day of liberation. Isn’t that what you wanted?”

The fellow added, “Write, so that everyone should know: These are a tiny minority. The vast majority of the Wadi Ara residents are good citizens of their country. Don’t make a historic mistake, it will be painful for everyone. For you as well.”