Israel's foreign minister is pushing for attaching the town of Umm al-Fahm, synonymous in Israel with loyalty to the Palestinian cause, to the future Palestinian state. 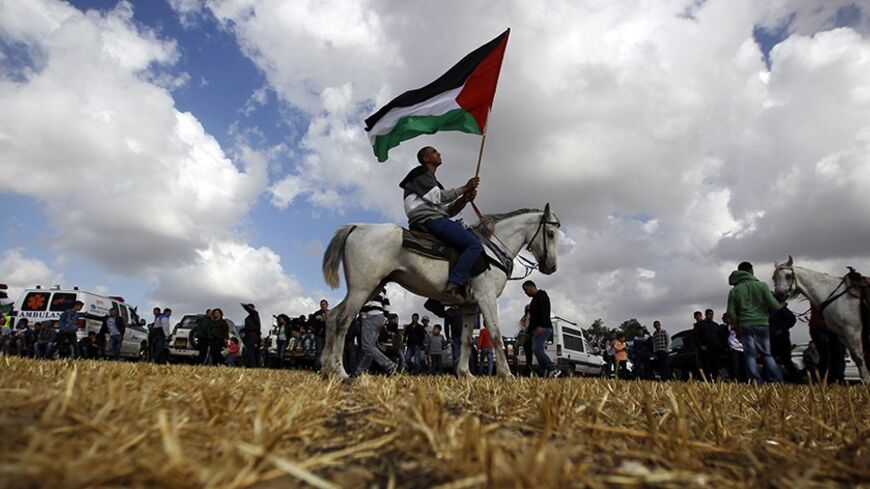 An Arab-Israeli protester on a horse holds a Palestinian flag during a march in support of the right of return for Palestinian refugees, near Umm al-Fahm, April 16, 2013. - REUTERS/Ammar Awad

As if there were not enough obstacles facing the negotiators in the faltering talks between the Israelis and Palestinians, Israeli Foreign Minister Avigdor Liberman has added another stumbling block. At the Jan. 5 annual Foreign Ministry conference of Israeli ambassadors and after a meeting with US Secretary of State John Kerry, Liberman set a new condition.

“I will not support an accord unless it includes land and population swaps,” he announced. In case anyone didn’t get the point, Liberman went on to explain, “I am referring to the Triangle and Wadi Ara [concentration of Israeli Arab towns in the northern district of Israel]. I’m not talking about [population] transfer or [evacuation] as in disengagement; no one is being evicted from their homes and no one is being dispossessed of their possessions. Everyone will remain in place. Only the border will move in the direction of Road 6.”

Umm al-Fahm was officially recognized as an Israeli metropolis in 1984. Today, about 50,000 residents live there. The city’s name means "source of coal" because the city was once known for its coal deposits. But to many Israelis, the city bears the disgrace of being the hub of the Israeli-Arab struggle against the state of Israel.

On Oct.1, 2000, when the second intifada broke out, hundreds of Umm al-Fahm residents complied with the call of the High Follow-up Committee for Arab Citizens of Israel, and demonstrated in protest of the killing of Palestinians on the Temple Mount two days earlier. The demonstrations took place in all Arab-Israeli cities and villages, but Umm al-Fahm was viewed as the leader of the struggle. That was because of the city’s size and the fact that Umm al-Fahm residents blocked the Wadi Ara road — a key traffic artery near the city that connects Israel’s north and center.

The National Commission of Inquiry, headed by Justice Theodore Or, harshly criticized decision makers in Israel and the police command. Nevertheless, this did not succeed in eradicating the negative perceptions held by large swathes of the population: that Umm al-Fahm is a violent city and its residents’ hearts are more closely connected to Palestine than to the State of Israel.

Hostility toward Umm al-Fahm was quickly turned into a political tool. Later on, it materialized into the right-wing slogan “No allegiance, no citizenship,” which was eventually translated into adjustments to the citizenship law.

Umm al-Fahm was singled out as a target by members of the radical right headed by Baruch Marzel, Itamar Ben-Gvir and former Knesset members Arieh Eldad and Michael Ben-Ari. Right-wing activists insisted on conducting a march in the city in March 2009 to prove that (in their view) the Israeli police and the state of Israel have no control or authority over the large Arab city.

The idea of land swaps between Israel and Palestine is not new. Proposals in this spirit were placed on the negotiation tables in advanced talks conducted by Palestinian Chairman Mahmoud Abbas and former Prime Minister Ehud Olmert in 2008. Territorial exchange was meant to be used as a last resort to resolve and overcome the main obstacle to achieving an agreement. In exchange for a Palestinian agreement to accede parts of Judea and Samaria, where it would be difficult to vacate the settlers (mainly in the large settlement blocks), Israel proposed alternative territories in their stead. In the negotiations between Abbas and Olmert, reference was made mainly to largely unsettled territories in the Jordan Valley.

But all that is water under the bridge. Today, Liberman, who's also the Yisrael Beitenu chairman, is pulling out the idea of land swaps not to overcome obstacles, but to realize his political electoral promise: to get rid of Umm al-Fahm and all its residents.

While Israel steadfastly bargains at the talks with the Palestinians regarding the maintenance of an Israeli security presence in the Jordan Valley in any future arrangement, Liberman is setting another condition. He wants to require Israel, in the event of an accord, to move the future border closer to the Wadi Ara Road, which connects the towns of Hadera and Afula, and attach the large Arab-Israeli city to the Palestinian state.

According to this idea, more than 50,000 residents of the Wadi Ara Triangle would be attached to Jenin, a fenced-in city. In the course of the second intifada, the fence surrounding Judea and Samaria was built specifically around Jenin to prevent the entry of suicide bombers flooding Israel at the time. Jenin was nicknamed by all the “terrorist hothouse” because the city was one of the leaders of the intifada and produced hard-core terrorist groups such as Hamas, the Islamic Jihad and Fatah’s al-Aqsa Martyrs Brigade.

But let us set aside security consideration for the moment. With your leave, I will touch upon the humanitarian facet of the Umm al-Fahm issue. I have a number of good friends in the city, one of whom is Ghassan Abbas, an actor in Israel’s HaBima National Theater.

Every day, Abbas makes his way from his city of Umm al-Fahm to the Tel Aviv metropolis. HaBima is situated in Tel Aviv’s very heart. In his work on the stage of Israel’s national theater, involving ongoing contact with the Israeli public in Tel Aviv, Abbas feels that he has fulfilled his dream.

Many Umm al-Fahm residents live their lives between their city and the cities of Haifa, Hadera, Netanya and Tel Aviv. They are very involved in Israeli society and feel themselves an integral part of it. Some are physicians who work in Haifa’s Rambam Medical Center and Hadera’s Hillel Yaffe Medical Center. Others work as nurses and university lecturers; some are manual laborers and quite a few are unemployed. Because of the prevailing stereotype of Umm al-Fahm, mainly since the events of October 2000, many of the city’s youths complete their studies in high schools or universities and find it difficult to find work. And despite their deep frustration over their lack of absorption into Israeli society and their ongoing sense of discrimination, the residents of Umm al-Fahm are Israelis and they feel Israeli.

What do they have in common with Jenin? They can only see Jenin from afar, when they ascend one of the hills that face the walled city. How will Israel — according to Liberman — build or move the separation barrier to include Umm al-Fahm and its 50,000 residents? How will their status and position be defined? And how is it possible to come one fine day and cut the umbilical cord connecting the city’s residents from the country in which they were born, came of age and lived their lives?

Beyond the humanitarian facet (which should not be belittled), we ask: What would Israel gain from annexing Umm al-Fahm to the territories of the Palestinian Authority, aside from fulfilling Liberman’s campaign promise to his constituents?

At the end of last week, former Mossad chief Meir Dagan said that the Jordan Valley is not essential to the security of the State of Israel and that Israel’s insistence on this in the negotiations stems only from political considerations.

Regarding Umm al-Fahm: Shifting the border into the very center of the country would constitute a substantive security blow to the state of Israel. This option was also raised for political reasons alone. And the Umm al-Fahm issue, in contrast to the Jordan Valley one, involves the lives of real people.