Saudi Arabia considers Pakistan a pivotal ally, both to contain Iran and to further Riyadh’s leadership bid in the Arab world. 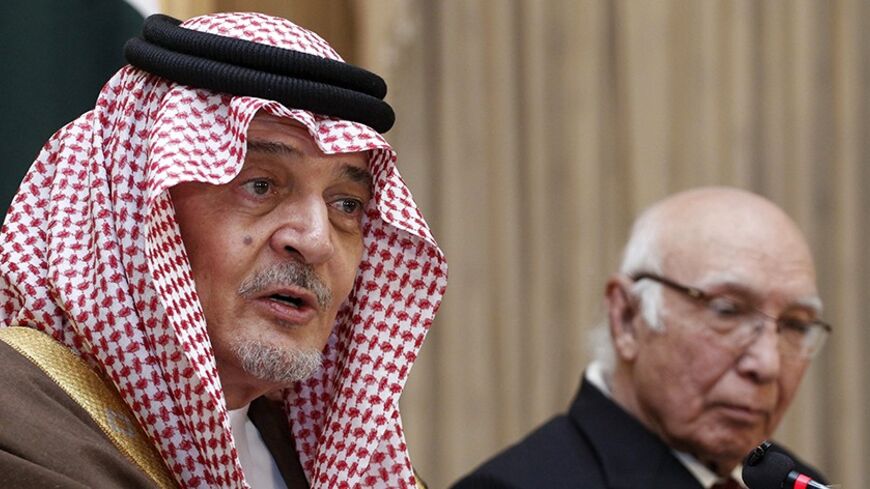 During his Jan. 6 visit to Pakistan, Saudi Foreign Minister Prince Saud al-Faisal celebrated the "deep-rooted historic relations between the two Islamic countries" and promised regular consultation meetings on regional and international issues of mutual concern. The promise of Saudi investment, together with remittances of around 1.5 million Pakistani workers in Saudi Arabia are much needed in Pakistan.

Saudi Arabia thinks its domination in the Arab world may benefit from close partnership and consultation with Pakistan. Some observers may think that Saudi's intention to establish a Riyadh-based Gulf military force for the sole purpose of containing Iran may be the main reason for Faisal’s visit to Islamabad. But this is not the only reason. Pakistani military assistance is not new in Saudi Arabia or the rest of the Gulf. It may be reliable, subservient, less controversial and cheaper than assistance from other sources. Above all, it is purely contractual and lacks the political strings that are often attached to military assistance.

Yet, Saudi Arabia may be seeking Pakistani security assistance for domestic rather than external threats. Given that Pakistanis share Islam with their Saudi partners, Pakistani troops can be deployed in religious sites without the Saudi regime being criticized for inviting infidels to defend the land of the two holy mosques. Pakistan needs the income and has the manpower and the expertise, while Saudi Arabia can be assured that no Pakistani hidden agendas or grandiose rival projects undermine the relationship. It can rely on Pakistani troops in times of crisis, specially internal ones. But it is unlikely that Pakistan will be of great help in the instance of a future Saudi-Iranian confrontation, which is highly unlikely at present.

Partnership with Pakistan satisfies the Saudi historic quest for a close non-Arab ally to maintain its hegemony in the Arab world and deal with its own internal security challenges. It is ironic that both hegemony in the Arab world and dealing with internal crises are better served as a result of close ties with non-Arabs. In North Africa, Egypt and Morocco were both potential and real Saudi allies. Saudi Arabia tried to incorporate Morocco into the Gulf Cooperation Council as a privileged non-Gulf member, but Gulf states resisted, and Morocco itself did not express enthusiasm.

Even if Egypt stabilizes under a new government, it remains volatile and destined to be preoccupied by its own domestic problems for a long time. From the Saudi perspective, Egypt remains a country dependent on Saudi aid, and this is how it should remain. A strong and stable Egypt — an unlikely development in the short term — is bound to be a competitor, simply because of its historical role and relevance to many Arab issues. In reality, Saudi Arabia is more comfortable with Egypt as a client state dependent on Saudi subsidies rather than an independent partner with its own ambitions.

Saudi Arabia flirted with Iraq during the Saddam Hussein era, simply to save the Gulf from Iranian revolutionary expansion, but Iraq was never a trusted Saudi partner. To understand this, one must go beyond the banality of sectarian divides. Even if Iraq was predominantly Sunni, Saudi Arabia would not be comfortable seeking a partnership with the country. Neither under the Sunni Hashemite monarchs of Baghdad nor under Saddam, was Saudi Arabia capable of overcoming its fear of a rival power center with a massive army that could claim superiority and entertain grandiose projects to unify the Arab world under its leadership. The US invasion in 2003 simply removed the threat from Saddam’s Arab nationalist grandiose projects and replaced it with a different threat.

Like Egypt, Iraq represents a historical rival with its own natural and human resources. Saudi Arabia turned Egypt into a client state and maintained animosity with Iraq for over a decade. Both can never be trusted Saudi partners, as they represent what Saudi Arabia wants to displace and replace in the region.

There remains the Saudi partnership with Jordan, a country plagued by serious economic problems and dependent on Saudi aid. Jordan, under its current leadership, does not threaten Saudi Arabia, hence the latter feels it can maintain military and security cooperation without the threat of rivalry, as Jordan’s main focus is its own existence as a buffer zone between Israel and volatile Arab neighbors. It is therefore unlikely that it will pose a serious challenge to Saudi Arabia. The latter can use its wealth to keep Jordan under control without the risk of a rival leadership claiming to represent something other than itself in the Arab region. Yet, Jordan is too small for Saudi Arabia to rely on [militarily].

Historical rivalries with several Arab countries have pushed Saudi Arabia to seek close ties with a non-Arab partner that is militarily strong but economically weak. Saudi Arabia can then offer its economic resources and the promise of investment in return for military and security cooperation. Pakistan seems to be the perfect choice. It is non-Arab and can never rival Saudi in the Arab region. Pakistan is unlike Turkey, whose past and present are too intimately entangled with its Arab neighbors. Saudi fears Turkey’s ambitions, and must be more than happy to see its government currently focused on its own domestic problems, from demonstrations to corruption cases. Like Saudi Arabia, Turkey has serious security challenges in both Syria and Iraq, but is unlikely to succumb to a Saudi agenda that does not correspond to its own interests. Saudi Arabia and Turkey can work together on specific issues, for example, on the Syrian file, but can never be long-term partners along the Saudi-Pakistani model.

Pakistan is that remote other who is close yet far enough for comfort. From the Saudi perspective, Pakistan may be the perfect partner, one that does not challenge the Saudi role in the Arab region but can boost its outreach across the Muslim world. Unlike others, Pakistani security and policing agencies can be used in Saudi Arabia to deal with internal problems, while Arabs will always be more problematic and risky. The renewal of the partnership with Pakistan seems to be needed in Saudi Arabia in anticipation of internal threats rather than the much-talked-about Iranian problem.

In the 1960s, Saudi Arabia welcomed Pakistani Islamist Abu Alaa Mawdudi and honored his proposal to establish a pan-Islamic University in Medina to boost Islamic knowledge, transnational connections and solidarity. In the 1970s, relations with Pakistan gave credibility to Saudi Arabia’s efforts to undermine Arab nationalism and promote Islamic cooperation. Before Pakistan became a source of military assistance to the Saudis, the country was important for Saudi's newly forged pan-Islamic legitimacy narrative that flourished under King Faisal.

The rationale behind the foundation of the two countries' relationship remains Islam, despite the serious differences in government, society and religious outlook. Throughout the 1980s, Pakistan’s involvement in the Afghan jihad turned the country into a transit station for many Saudi and Arab jihadists. The country dominated the news as the place where Western and Saudi funds were channeled to the Afghan jihad.

Both countries need each other for different reasons, but their "deep-rooted historic relations" exist in a new context. Whereby Saudi Arabia’s enemy of 30 years remains Iran, Pakistan’s main military goal is to protect itself from powerful India and the mounting threat from Afghanistan.

It is unlikely that Pakistan will take the risk and engage Iran in a conflict like Saddam did in the 1980s. Pakistan already has serious security concerns and is unlikely to antagonize Iran, thus compounding its existing problems. Above all, both Saudi Arabia and Pakistan remain within the US sphere of influence, although their relations with the United States may occasionally appear strained. As such, it is unlikely that either will be able to pursue an independent foreign policy that contradicts, let alone undermines, the general US agenda. They may, however, be able to make noises and celebrate new partnerships that need to be tested on the ground. It remains to be seen whether this partnership will result in tangible measures that enhance Saudi external security. In fact, it is better to think of the Saudi-Pakistani partnership as a measure to boost Saudi ability to face domestic rather than external threats.