An Indian intelligence reports sees Turkey as becoming a hub for anti-India activities second only to Pakistan. 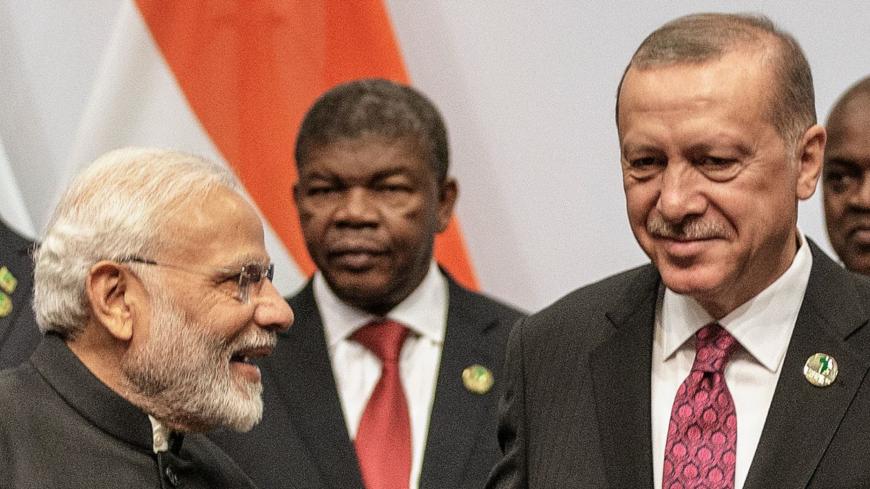 The government of Turkish President Recep Tayyip Erdogan is faced with a potential new foe, India, a close ally of Israel, that is loudly signaling it may join swelling axis of anti-Turkey nations led by Saudi Arabia, Egypt, the United Arab Emirates and Greece.

The acrimony is being channeled through a spate of nasty articles in the Indian media casting Turkey as a malign meddler that is seeking to recruit and radicalize India’s estimated 182 million Muslims in cahoots with Pakistan.

The most striking of these appeared in the Aug. 7 edition of the Hindustan Times, India’s highest-circulation English-language newspaper. Shishir Gupta, a prominent Times columnist with close ties to the establishment, cited an Indian intelligence report that claimed Turkey had emerged “as the hub of anti-India activities” second only to Pakistan. He said Turkish individuals and groups, “some directly linked to Erdogan and his family,” had accelerated the awarding of “lucrative scholarships” to Indian Muslims to study in Turkey and that once they arrived they were “taken over by the Pakistani proxies” operating there. The motives Gupta ascribes to Ankara are familiar: Building on Turkey's Ottoman imperial past, Erdogan wants to become a latter-day caliph, the protector of Sunni Muslims worldwide and to challenge Saudi Arabia’s dominance over them.

The subcontinent may seem like fertile ground. The violent repression of Muslims under Indian Prime Minister Narendra Modi’s Hindu nationalist government boosts Erdogan's appeal as a rare leader who speaks up for Muslims and pushes back against the West.

This also has historical resonance. In the wake of the Ottomans’ defeat by the Allies in World War I, the Muslims of India launched the Khilafat movement, an effort to salvage the Ottoman sultan, who was double turbaned as the caliph, or spiritual leader of the global ummah (Muslim community). When Mustafa Kemal Ataturk booted out the sultan and then abolished the caliphate in 1924, sentiments soured. Erdogan seems bent on undoing Ataturk’s secular legacy, putting Islamic nationalism at the center of his discourse.

“South Asian Muslims admired the Ottoman Empire as the last remaining Muslim empire and their ‘Khilafat Movement’ reflected their unhappiness about the caliphate’s end,” said Husain Haqqani, a former Pakistani ambassador to the United States who now is a scholar at the Hudson Institute. “As a new state, Pakistan has reflected that tradition of seeming reinstatement of a pan-Islamic caliphate. Erdogan’s neo-Ottomanism plays well with Pakistan’s pan-Islamist national sentiment,” Haqqani told Al-Monitor in emailed comments.

Turkey’s alleged campaign to radicalize India’s Muslims feeds into Modi’s polarizing tactics to consolidate his nationalist base. But the main reason for India’s mounting ire is Erdogan’s diplomatic backing for Pakistan on the disputed Muslim majority territory of Kashmir.

Erdogan fired the opening shots at the UN General Assembly in September 2019, blasting India for revoking Indian Kashmir’s semi-autonomous status the month before and robbing Muslims there of their rights. A furious Modi held court with Greek, Armenian and Cypriot leaders at the UN and canceled a two-day official visit to Turkey that was meant to take place in October. In a rare departure from its neutral stance on the Kurdish issue, India condemned Turkey’s Operation Peace Spring assault against Syria’s Kurds, which began Oct. 9. This ought to have prompted Turkey, grappling with its own internal rebellion for almost four decades, to reconsider its support for separatist aspirations in Kashmir.

India insists that the status of Kashmir is its own business and blames Pakistan for a decadeslong armed revolt against its rule there, saying Turkey’s support only serves as a means of “justifying” Pakistan’s “terror campaign.” Pakistan says the future of Kashmir, where 60% of the population is Muslim, should be resolved through a plebiscite. Pakistani Prime Minister Imran Khan has vowed to take the matter to the International Criminal Court.

The two nuclear powers have gone to war four times, three of them over Kashmir, since Pakistan won its independence from India in 1947. The other was over Bangladesh.

In February Erdogan triggered further Indian ire, telling the Pakistani parliament, “Today, the issue of Kashmir is as close to us as it is to [Pakistanis]. Turkey will continue to raise its voice against the oppression.” He likened the struggle of Kashmir’s Muslims to that of the Turks against the British in Gallipoli. India’s Foreign Ministry called Erdogan’s remarks “unacceptable.” They “reflect neither an understanding of history nor of the conduct of diplomacy,” spokesman Raveesh Kumar said.

Turkey has traditionally supported Pakistan over Kashmir in the diplomatic arena. In exchange, Pakistan has backed Turkey over its 1974 military intervention in Cyprus “and India did not mind so much,” Colakoglu said. But Erdogan, through his unremitting and strident rhetoric on Kashmir, has carried that support to a level Modi and his fellow Hindu nationalists deem “unacceptable” and the fallout has been immediate, Colakoglu noted.

India threatened to cancel a $2.3 billion project for Turkey to co-manufacture ships for the Indian navy just as it inked a $40 million deal to provide radars to Turkey’s historical enemy, Armenia. Colakoglu said the fact that India ultimately didn’t scrap the shipbuilding venture indicates that India may be counting on deepening mutual economic dependency in a bid to “prevent Turkey from moving fully into the Pakistani camp.”

“India thought that its economic strength and its size immunizes it from any kind of accountability,” said Mosharraf Zaidi, who heads Tabadlab, a think tank based in the Pakistani capital of Islamabad. “Turkey represents a pretty robust invalidation of that. Its actions took India by surprise,” he told Al-Monitor.

The balance of trade between India and Turkey is hugely tipped in India’s favor. The ship contract was meant to help redress this. Tellingly, Erdogan did not remark publicly on the first anniversary of the Aug. 5 abrogation of Kashmir’s status, leaving it to Pakistani President Arif Alvi to reveal via Twitter that Erdogan had assured Pakistan “that his country would continue to support Pakistan’s stance on Kashmir.” Had India’s economic strong-arming worked?

The test will be whether Erdogan repeats his anti-Indian tirades at the UN General Assembly, which is scheduled to be held virtually this year because of the COVID-19 pandemic. The flurry of articles in the Indian media about Turkey’s purported efforts to subvert Indian Muslims may well be the government’s way of telegraphing Ankara to back off.

Haqqani said that for Pakistanis, “On Kashmir, Erdogan’s statements help bolster morale even if they do little substantially. Given that others don’t even make such statements, Imran Khan appreciates Erdogan for this lip service.” The former envoy added that Turkey has also helped Pakistan more concretely, saying, “Turkey’s vote in the United Nations Financial Action Task Force on terrorist financing and money laundering has been critical for Pakistan in avoiding further sanctions.”

In truth, set against oil-rich Gulf states where millions of Indians, Bangladeshis and Pakistanis are employed, Turkey’s sway over subcontinental Muslims remains marginal. “The Gulf Arab states exert their influence directly through charitable organizations and indirectly through diaspora communities on their own soil. They can invest billions of dollars. Turkey cannot hope to compete,” said a former editor-in-chief of a major Indian newspaper speaking to Al-Monitor on condition that he not be identified by name. Moreover, Kashmiris are “used to Muslim heads of state saying the right things and not doing squat.”

Paradoxically, there are direct parallels between Erdogan’s Justice and Development Party (AKP) and Modi’s Bharatiya Janata Party (BJP) presciently captured by Kashmiri author Basharat Peer in a pair of essays published in 2017 under the title “A Question of Order: India, Turkey, and the Return of Strongmen.”

The BJP has a peculiar love-hate relationship with the AKP. The Indian party has studied in granular detail how the AKP mobilized the Anatolian underclass with revamped myths of Turkish imperial glory. The BJP is a decade behind, but is taking cues from Erdogan’s playbook, dismantling secular institutions, squelching free expression and projecting military might.

Yet above all economic growth and a rising middle class have underpinned both parties’ success. As such, Erdogan’s increasingly overt embrace of political Islam reflects his ideological mindset as much as efforts to divert public attention from Turkey’s wilting economy.

Erdogan’s pronounced pivot toward Pakistan can be explained in view of such worries. Economic concerns have similarly informed Turkey's recent silence over horrors inflicted by China on its Muslim Uyghur population.

Trade is a major factor. With a median age of 27, Pakistan’s 220 million-strong population offers a vast market for Turkish goods, Zaidi said. Turkish construction giants and military hardware have a far greater competitive edge in Pakistan than they do in India. “Pakistan is where Turkey was in the 1990s,” Zaidi said. He continued, “The economy has nowhere to go but up. There’s massive numbers of young people with globally up-to-the-mark credentials with many of the aspirations that fueled the AKP. You could have 110 million people eating Ulker chocolates, watching Esra Bilgic and cheering on Galatsaray for the next 60 years.” Zaidi was referring to Turkey’s globally known chocolatier, the lead Turkish actress in a series about the Ottomans viewed by millions of Pakistanis and a successful Turkish soccer team, whose home is Istanbul.

In 2018, Turkey signed a $1.5 billion dollar deal to sell Pakistan attack helicopters and another to sell four corvettes to the Pakistan navy. It also has been helping to keep Pakistan’s fleet of F-16 fighter jets up to date.

Yet as Haqqani points out, Turkey’s weapons manufacturing is partly under license from the United States and “Turkey is hardly free to supply Pakistan equipment that Americans do not want it to have.” Congress has been holding up export licenses for US-made engines that Turkey needs for the attack helicopters that it is selling to Pakistan in a bid to pressure Ankara to get rid of S-400 missiles it bought from Russia.

Meanwhile, Pakistan has something Turkey allegedly wants to have: a nuclear weapon. Turkey is party to the Nuclear Non-Proliferation Treaty and signed the International Atomic Energy Agency’s Additional Protocol. As a NATO member, Turkey is shielded by the organization's nuclear umbrella. Yet Erdogan hinted at nuclear ambitions during a speech in a September 2019 when he groused about the “unfair situation” whereby some countries are free to have nuclear weapons and others not.

“The concern that Turkey and Pakistan may be collaborating in the nuclear realm is not new,” said Gallia Lindenstrauss, a senior research fellow at the Tel Aviv-based Israeli Institute for National Security Studies, in an interview with Al-Monitor. “However, the fact that Turkey might decide to seek a nuclear military capability, and in general Turkey’s assertive foreign policy and emphasis on forming its independent path, should make us more concerned by growing Turkey-Pakistan relations,” Lindenstrauss warned.

But Pakistan may not be so enthusiastic. “There has been some talk of Pakistan helping Turkey develop nuclear weapons whenever Turkey decides to go in that direction. But that might not be easy and Pakistan may not want to lose its status as the world’s only Muslim nuclear power,” Haqqani said. “When the chips are down, ‘brotherly relations’ with Turkey are more symbolic and emotive than a source of real economic, diplomatic or military strength for Pakistan.”