India’s recent moves to repeal Kashmiri autonomy are a lot like Prime Minister Benjamin Netanyahu’s intent to annex parts of the West Bank. 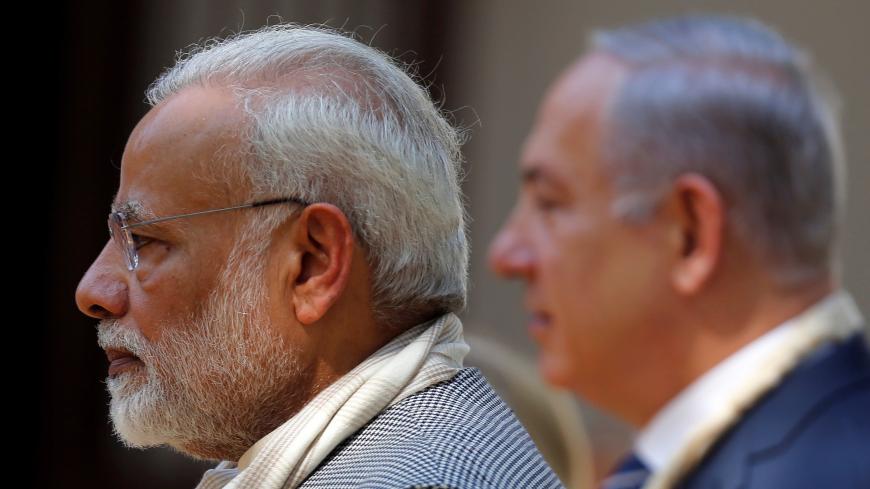 Indian Prime Minister Narendra Modi likes to say that he is married to politics. It is obvious that he has an agenda of Hinduism before all else, and he has no shame in implementing it. The enormous support that he got in the July election for India’s parliament encouraged him to take vigorous steps toward that goal. Last week, for instance, he led an effort in the Indian legislature to repeal the Indian Constitution's Article 370, which has granted autonomy to the state of Jammu and Kashmir since the creation of India and Pakistan back in 1947.

I am reminded of a working visit to India in the summer of 1993, when I was deputy foreign minister. The visit took place just one year after Israel and India established diplomatic relations, and the ministry was well prepared. I still could not say anything about the secret Oslo process, but I did prepare myself for conversations about how Prime Minister Yitzhak Rabin’s government was committed to reaching a peace agreement with the Palestinians and Syrians. I assumed it would be the main topic of all of the talks.

At a meeting just before my departure, I was told by senior ministry staff that the most important issue for the Indians was our position on Kashmir. I grinned and asked them, “What exactly do I think about Kashmir?” I was told that Israel supports the Simla Agreement of 1972, and that it was unlikely that I would have reason to say anything else. I did remember that there was such an agreement, but I couldn’t recall exactly what it said. One of the participants pulled out a copy and handed it to me. Upon reading the agreement between India and Pakistan, I could find no reason to challenge the experts’ position.

When I landed in India, I was greeted by a sea of journalist and countless TV cameras. I was a bit surprised that they were waiting for me, but I was ready to tell them about the progress we were making to advance the diplomatic process in the Middle East in the context of the 1991 Madrid Conference. But before I even opened my mouth, I was pummeled with questions — actually, just one question: What is the Rabin government’s position on Kashmir?

I repeated what I had memorized on the flight over: “Israel continues to support the 1972 Simla Agreement between India and Pakistan.” I was sure that having said that, I would have to face serious follow-ups. I didn’t. The TV crews immediately closed up shop and the army of journalists retreated. The next day I found that my brief response made the top headlines of India’s most important newspapers.

It was surprising and also rather annoying. After all, it was a memorized one-line response. The really important things I had to say about the multilateral process and bilateral talks with our neighbors seemed to be of no interest to anyone.

So I read the Simla Agreement again and again, until I finally understood what it was all about. It's India’s version of UN Resolution 242, playing the same role for the Indian government that the famous Security Council resolution of November 1967 has played for Israel’s governments since then. The Simla Agreement covers a series of issues including the complicated and difficult one of prisoner exchanges and a referendum that will one day determine the future of this contested strip of territory, the only Indian state with a Muslim majority. As far as the Indians were concerned, the most important point in the agreement was this one: Until an agreement is reached about the future of this territory, all disputes between India and Pakistan will be resolved diplomatically.

This particular statement was so simple, so obvious, that upon first reading it seemed innocuous, but it was nothing of the sort. Even if there was no referendum (and in fact, one has never been held), the Pakistanis agree that they will not use force to change the status quo, which is the partition of Kashmir into two parts: two-thirds under Indian jurisdiction, with significant autonomy for the residents, and another third under Pakistani jurisdiction. The Simla Agreement ensures that the Indian authorities would continue to rule the area, as any Pakistani use of force would constitute a violation. That was why it was so important for India to get the support of the international community. The support of Israel was particularly important at the time because the Indian government believed that Israel’s position reflected the Americans'.

Security Council Resolution 242, which was approved just a few months after the 1967 Six-Day War, rejects the seizure of territory by force and calls for an Israeli withdrawal from the territories it occupied during the conflict. It also makes the restoration of the situation that existed before the war dependent on a peace agreement between Israel and its neighbors. In this way, it differed from the decision by the world powers after the 1956 Sinai Campaign, which called for an immediate Israeli withdrawal from the Sinai Peninsula and the Gaza Strip with no agreement contingency.

I can only assume that the international community never considered the possibility of Israel maintaining the status quo with Syria and the Palestinians for the next 52 years under Resolution 242. Similarly, no one thought that the status quo would persist in Kashmir without a referendum for the next 47 years.

Modi’s efforts to repeal Kashmiri autonomy and overturn the ban on Indian residents from outside of Kashmir settling in the territory are a lot like Prime Minister Benjamin Netanyahu’s intent to annex parts of the West Bank. Both are nationalist intentions that correspond with the two leaders’ political worldviews. In both cases, the leaders are also endangering their countries’ political and diplomatic interests without benefiting their own people in any way.

The world seems prepared to ignore and accept the behavior of the Israeli and Indian governments to maintain the status quo. From the point of view of the political right in both India and Israel, the status quo is working in their favor, enabling the government in place to keep controlling the territories.

On such a backdrop, if the governing parties decided to further exploit their advantage, it might drag the other side into a cycle of violence. It should be no surprise if the weak side resists such attempts and refuses to accept a status quo that benefits only the stronger side, or when the stronger side tries to break the status quo to its advantage. Even weaker sides have limits, and this is true both in India and in Israel. And when the parties involved are also nuclear powers, the situation becomes particularly dangerous.

Modi’s reelection in May 2019 to head the giant country certainly added to his sense of power. The effort to end Kashmir’s autonomy is a result of this euphoria and tainted by a sense of religious and perhaps even ethnic superiority. Pakistani Prime Minister Imran Khan has been reacting cautiously so far, but has accused Modi of adopting a Nazi-like approach.

Still, Khan is well aware that his outcry will change little. The UN Security Council might adopt a resolution condemning Modi’s move in the framework of Chapter VI of the UN Charter about peacefully resolving conflicts. The European Union might publish a communique criticizing the Indian decision. Modi acted the way he did because he knew he could get away with it. But the most significant question now is whether the move was in the true interests of his country.