Despite Kashmir’s predominately Muslim population, there are many possible reasons why some Arab countries have been reluctant to condemn India’s actions. 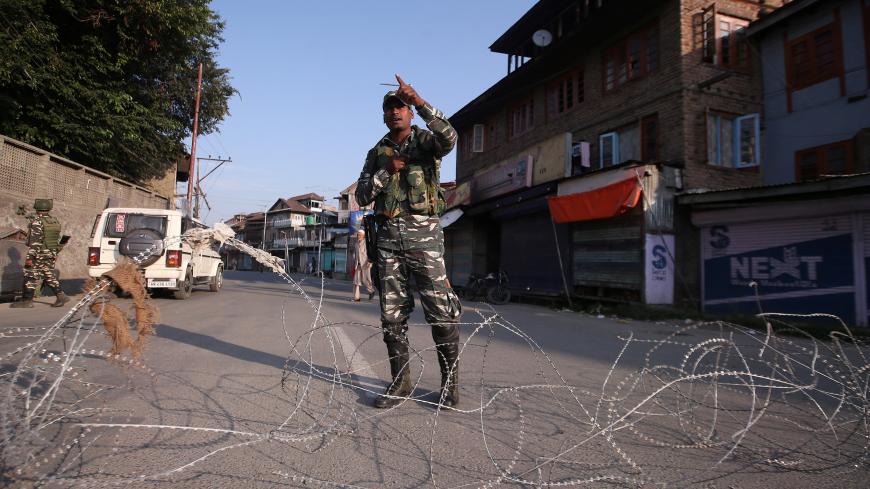 An Indian security personnel stands guard on a deserted road during restrictions after the scrapping of the special constitutional status for Kashmir by the Indian government, in Srinagar, Aug. 23, 2019. - REUTERS/Danish Ismail

Tensions continue to build in locked-down Jammu and Kashmir, but Indian officials announced Aug. 27 that some restrictions have been lifted in some areas, and schools and businesses in those areas would reopen Aug. 28. Officials also said telephone landlines would be restored Aug. 27.

Meanwhile, the Arab world’s response to India’s crackdown over the mainly Muslim area — the Indian-administered part of the larger Kashmir region — remains muted.

When India and Pakistan won their independence from Britain in 1947 and the subcontinent was divided, the legal status of the princely state of Jammu and Kashmir remained undecided. It became part of the UN-recognized disputed territory of Kashmir, with India controlling 55% (all of Jammu and Kashmir), Pakistan 30% and China nearly 15% of the region.

On Aug. 5, the ruling party in New Delhi suddenly rescinded Jammu and Kashmir’s special autonomous status, demoting it from a state and dividing it into two federally administered regions, or “union territories.” The area was placed under strict military curfew, and all communication links with the outside world were severed.

By revoking Article 370 of the Indian Constitution with a presidential order, New Delhi deprived Kashmiris of privileges under which only locals could buy land and hold government jobs in Jammu and Kashmir.

Pakistan condemned the action. China called it unacceptable. Many Western countries, along with the United Nations, Human Rights Watch and Amnesty International, took notice of India’s actions, but the Middle East remained mostly silent, even though Kashmir is predominately Muslim.

Except for Iran and Turkey, there has been no significant response from the region. Considering that the Kashmir conflict has the propensity to spin out of control and threaten the stability of the entire region, the Arab world’s lack of interest is unusual.

Moreover, as India and Pakistan are nuclear powers that have fought several wars over the same issue in the past, the Kashmir crisis carries risks for the Middle East as well as South Asia.

Concerned about the ongoing state of affairs, Tehran issued two official statements calling on India and Pakistan to solve the dispute diplomatically, expressing hope Aug. 11 that the Muslims of Jammu and Kashmir would be able to exercise their legal rights. Iranian Supreme Leader Ayatollah Ali Khamenei also recently addressed New Delhi, saying, “We expect the Indian government to adopt a just policy toward the noble people of Kashmir and prevent the oppression and bullying of Muslims in this region.”

Also, a resolution was presented in the Iranian parliament in support of Kashmir. According to parliamentarian Ali Mathari, who raised the issue, Iran has an important responsibility to its fellow Muslims in Kashmir, even though Iranians are overwhelmingly Shiite Muslims while Kashmiri and Pakistani Muslims follow Sunni Islam.

In stark contrast, the responses and reactions received from the Sunni states of the Organization of Islamic Cooperation (OIC) have been quite muted. While calling on both India and Pakistan to de-escalate, even Riyadh has not condemned New Delhi. Saudi Crown Prince Mohammed bin Salman has remained noncommittal.

In the meantime, the United Arab Emirates (UAE) presented Indian Prime Minister Narendra Modi last week with its highest civilian award — the Order of Zayed. Many human rights activists condemned the move in light of Modi’s actions in Jammu and Kashmir. In addition, the UAE fully supported India’s revocation of Article 370, while Abu Dhabi’s envoy in India, Ahmed al Banna, has stated that Kashmir is India’s “internal matter,” ignoring the internationally disputed status of that region.

Apparently, the Arab world has lost interest in Kashmir and can simply be expected to take an opposite stance to that of Pakistan, Iran and Turkey over the matter. If Indo-Pakistan friction over the conflict escalates, Iran will certainly be more empathetic toward Kashmir than will Saudi Arabia. Though Pakistan has good relations with Gulf Cooperation Council (GCC) states, even they are quite likely to maintain a distance from the fray.

However, the Kashmir issue doesn’t affect the Arab states directly, and they might well have supported the Kashmiri Muslims’ cause if not for three factors.

First, trade is a top priority for Saudi Arabia and the UAE, as GCC countries’ annual trade with India is worth at least $100 billion. Even as the Kashmir situation worsened, Saudi Aramco was finalizing investments worth $15 billion in an Indian conglomerate, Reliance Industries.

India is the UAE’s second-largest trade ally, with bilateral trade exceeding $50 billion in 2018; therefore, Abu Dhabi’s stance is understandable. In fact, the UAE’s global port operator in Dubai, DP World, has plans to run a logistics hub in Indian Kashmir.

Second, with close ties to both Pakistan and India, Arab states find it difficult to tackle the dispute. Due to the Sunni majority population in Jammu and Kashmir, Saudi Arabia had been involved in building mosques there, and it provided assistance with religious training. But Riyadh reduced that role as it developed more extensive trade ties with India.

Third, Arab states have never considered India a rival. Instead, it's just a lucrative market for business. It’s not a Muslim state, and there are no sectarian or religious issues, either. Around 7 million Indian expats work in the Middle East with many in top positions, and there are many common links.

Nevertheless, the world fears Jammu and Kashmir could end up becoming a battleground for Middle Eastern rivalries if Iran plays a sustainable role. With the issue being a Muslim cause, it could become hard for Riyadh to stay away, especially if Tehran takes the lead in championing the cause.

To add perspective, Iran has never really disengaged itself from the Kashmir issue. In 2018, Khamenei emphasized the importance of resisting oppression and referred to Kashmir as well as other conflict-ridden Muslim regions.

Ostensibly, Iran has influence in the Kashmir Valley. Though most Kashmiri Muslims are Sunni, 15% of the local population is Shiite. This factor alone could get Iran’s rival, Saudi Arabia, to take a renewed interest in the region. Having maintained ties over the years, Kashmiri Shiite scholars visited seminaries in Iran regularly, and Iranian scholars reciprocated. Two years ago, an Iranian university in Mashhad even commemorated the anniversary of a Kashmiri martyr, becoming the second country to do so after Pakistan.

If the crisis worsens and sympathy for Kashmir keeps growing, GCC members might not be able to remain completely uninvolved. Though Kashmir has remained a bilateral issue between India and Pakistan, any new development could serve to internationalize the matter further — and it could become hard to ignore.

Finally, Pakistan is likely to increase pressure on the OIC, which represents 57 Muslim-majority countries, and its Contact Group on Jammu and Kashmir. Though India is also a member, the OIC called for an end to the curfew and officially stated that the Kashmir controversy is an international dispute.