In exclusive remarks to Al-Monitor, Salih Muslim, the chairman of the Democratic Union Party, said that Syria's Kurds should be better recognized in the Geneva negotiations. 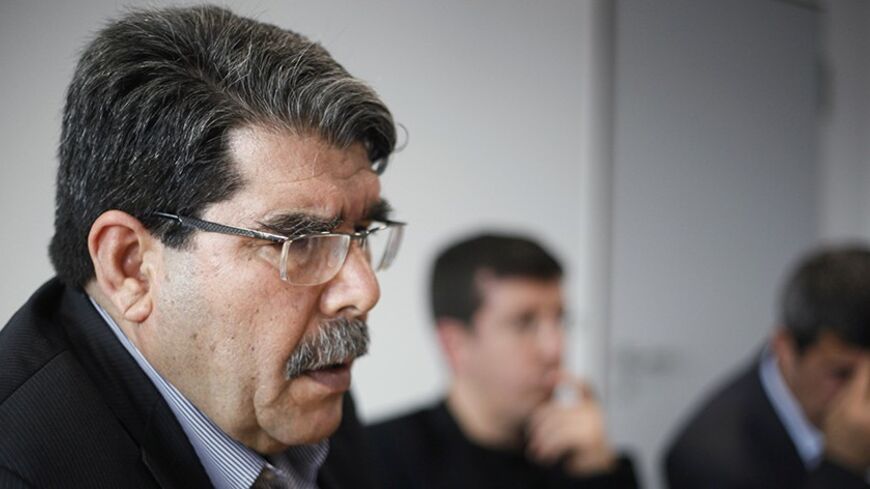 BRUSSELS — The leader of the biggest Syrian Kurdish party has suggesteds that the Western countries are pushing the Kurds to talk to President Bashar al-Assad by forcing them to be either part of the opposition or the regime delegation in Geneva II. But he says there is no difference between the Syrian government or the opposition in terms of Kurdish rights.

In an exclusive interview in Brussels with Al-Monitor, Salih Muslim, co-chair of the Democratic Union Party (PYD), said the Kurds were not willing to talk to the Syrian regime, but that they did not rule this out in the future. The Western countries blocked the PYD from going to the Geneva II conference, although Russia was willing to include the Kurds.

The Syrian Kurds were repressed by the Syrian government for decades and did not want to join any government delegation. Since 2011, they have become more independent and have been ruling the majority of their own areas. In late January, three local administrations in the Kurdish enclaves of Afrin, Kobani and Hassakeh were created in cooperation with other ethnic and religious minorities.

Nevertheless, the PYD was still critical of the regime that has repressed it in cooperation with Turkey since its creation in 2003. Muslim told Al-Monitor, “Until now, PYD members were jailed, captured and many of them killed by torture. If [the Assad government] calls for the Kurds, the Kurds cannot trust them. Actually, they have called us many times to have separate discussions.”

But the PYD leader said the Kurdish parties reject this offer, explaining, “On the other side, the Americans are especially pushing us to the government side, even for Geneva II. As Kurds, we would like to have separate delegations and discuss this with the opposition. But America told us: 'Why don’t you come with the government? You should be inside the regime delegation,'” he said.

He suggested that there should be no problem for the PYD to talk to Assad, if the Americans also talked to the Syrian regime. “If they are sitting with the regime and discussing, why shouldn’t we do it?”

Nevertheless, Salih emphasized the PYD is “not willing to do anything with the regime until now, maybe in the future.”

As an example, he pointed out that planes with relief aid for Qamishli were going to the regime-supported Syrian Arab Red Crescent, which was giving it to regime-supported Arab tribes. He said, “They don’t give it to the Kurdish, they distribute it to some areas and it doesn’t come to our people, while we have Kurdish Red Crescents effective everywhere.”

The PYD co-chair said, “The regime and the Salafists are the same. We don’t believe that one of them is better than the others.” Therefore, he said, “[The government] didn’t change [its] mind. They are keeping the Baathist ideology as it is.”

The Kurds are fighting armed Islamist groups in the provinces of Hassakeh, Aleppo and Raqqa and occasionally clash with the regime in the city of Aleppo. But Muslim said Assad will fight them if he gets stronger and gets closer to the Kurdish areas. He added, “Of course, he will try. But we [Kurds] will defend ourselves, and in the future also.”

The Kurdish leader said that although the PYD initially supported Geneva II and a political solution, the current negotiation partners did not represent the Syrian people, saying, “We believe the coalition is not representing all Syrian people. Maybe some.”

He pointed out that many leaders of the Syrian National Coalition have lived outside Syria for many years and do not have any presence on the ground in Syria.

“We are not a small people; 15% of the population are Kurds. As you know, we can protect ourselves even from the regime and extremists. So we have to have a word in the solution. If they ignore the Kurds, they will not find a way to solve the Syrian problem.”

Furthermore, he suggested that the Syrian National Coalition cannot control any armed groups on the ground: “Who is going to stop them if you discuss a cease-fire? For our side, it is OK. Within one half-hour, we can stop all Kurdish forces and they will obey this, but for those groups it is not true. … Maybe Ahmed Jarba gets arrested when he enters Syria, but we have our area. You have seen me over there [in Qamishli] and I am well-protected. Nobody can arrest me, they listen to me.”

Muslim said they have proposed to the Syrian opposition that they could hold their meetings in Qamishli instead of in Turkey, “But Ahmed Jarba cannot do it anywhere, because he doesn’t accept us and doesn’t recognize us as a force, just because Arabic chauvinists don’t accept Kurds.”

Speaking Jan. 23 on the sidelines of the Geneva II conference, Turkish Foreign Minister Ahmet Davutoglu said, “Turkey has done its best for the PYD and the other Kurdish groups to participate in the Syrian National Coalition.”

But the Kurdish leader says they can only work together if the Syrian National Coalition recognizes the Kurds in the future constitution and guarantees Kurdish rights. “But they say even if they get something on paper, they should discuss this in the future parliament and have a referendum over it. If you have a referendum with 20 million for 3 million, of course they will say no.”

Although the PYD and the KNC reached an agreement in December 2013 for a united Kurdish voice in Geneva II, it fell apart.

“We have agreed in Erbil to open the borders and have a joint delegation, but somebody didn’t allow them,” Muslim said.

Although some in the KNC say the agreement allowed them to go to Geneva II as long as they demanded Kurdish rights, the PYD leaders said the KNC violated the agreement.

“The people who joined Geneva II should be selected by the two councils,” Muslim told Al-Monitor. “But the Kurdish issue was not discussed in Geneva II, and they just went as part of the coalition [with no discussion]. The representatives who joined the delegation should be agreed on by two councils, not by themselves.”