The emergence of Shaker Wahib, a young, charismatic field commander in the Islamic State of Iraq and al-Sham (ISIS), may be tied to the organization’s deeper goals. 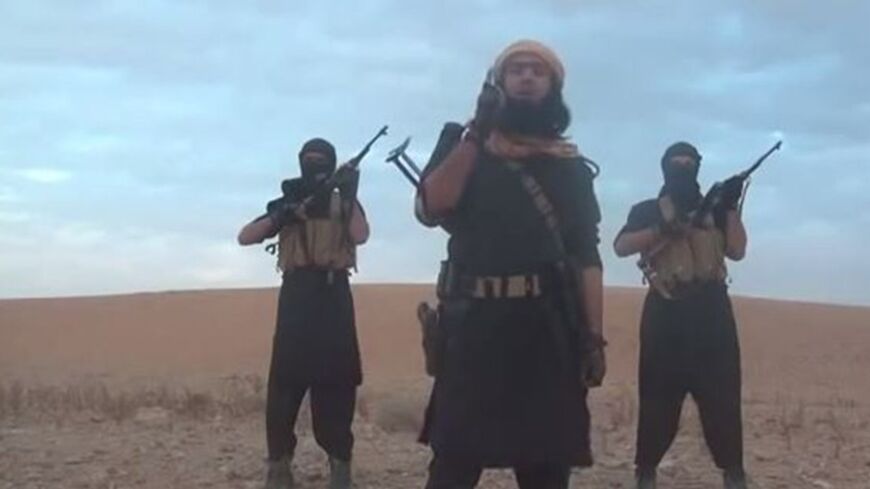 Al-Qaeda commander Shaker Wahib is the heir apparent of Abu Musab al-Zarqawi and his legacy with Iraqi and regional young al-Qaeda militants, who cite his words and speeches more than they do those of the organization’s founder Osama bin Laden, its current leader Ayman al-Zawahri or even Islamic State of Iraq and al-Sham (ISIS) commander Abu Bakr al-Baghdadi.

Zarqawi's legacy can be seen as responsible for young commander Shaker Wahib gaining widespread renown after he removed the black mask that covered his face and executed a group of Syrian drivers in Anbar on Aug. 25, 2013.

Not much information is available about Wahib, who is called “commander Abu Wahib” and “Desert Lion” by ISIS supporters. The little that is known comes from the tidbits disseminated by his supporters, who announced that he was born in 1986 and never completed his studies in computer science at the University of Anbar following his capture by US forces in 2006 on charges of belonging to al-Qaeda. According to these supporters, he was incarcerated at Bucca Prison in southern Iraq until 2009, when he was transferred to Tikrit Central Prison. He managed to escape in 2012 during an attack executed by his organization on the prison gate as a rebellion raged inside. This plot led to the flight of 110 detainees, including Wahib.

Wahib became an ISIS field commander in the Anbar desert upon his escape from prison, the direct result of years of planning, training and preparation inside Bucca and Tikrit prisons. The two prisons have housed a large number of the organization’s leaders, reportedly among them former leader Abu Omar al-Baghdadi and current leader Abu Bakr al-Baghdadi.

Iraqi authorities did not provide any information about Wahib, though ample information should have been available as a result of the man’s incarceration. They also did not offer any reward for his capture, and did not publish photographs of him until he exposed his face in the video showing the interrogation and execution of the Syrian drivers one year after his escape.

The video of the drivers' interrogation and death, the publishing of recordings and photographs of Wahib in parades — sometimes carrying weapons or holding a falcon — and the opening of a Twitter account through which he communicated with his supporters all made it clear that Wahib was no ordinary field commander. Rather, he was essentially a reincarnation of Zarqawi.

Zarqawi’s own face had remained unknown in Iraq until April 2006, when he appeared in a videotape with dozens of masked gunmen firing a weapon on a training course and giving a speech.

The similar physical build shared between Zarqawi and Wahib suggested a replay of the 2006 scene. Wahib appeared in some videos all in black amid masked gunmen, carrying a different type of weapon from that used by his soldiers. In these clips, he performed athletic feats and gave passionate speeches similar to those of Zarqawi, who frequently laced his own talks with fervent religious poems.

The strangest aspect of Wahib’s story is that security forces have repeatedly announced or leaked news about his death, the first of which appeared in August 2013 after the execution of the Syrian drivers.

ISIS never denied reports of his death until he resurfaced — in his customary spectacular fashion — at the onset of clashes in Anbar province on Dec. 31. At that time, he was seen with two of his supporters wearing a helmet usually worn by members of the security forces, inside the police headquarters in Ramadi, Anbar's capital.

After this appearance, security forces again announced his death, helped this time by a tweet from an ISIS supporter and pictures uploaded by other Twitter users showing a dead man supposed to be Wahib.

But ISIS denied his death, as a multitude of other pictures of him began surfacing. This reached the point where the organization’s young female sympathizers from various Arab and Gulf countries started publishing his photographs on social networking sites, naming him the man of their dreams.

The fact is that Wahib, whether dead or not, is an image intended to inspire and stir ISIS supporters inside and outside Iraq, as well as intimidate the citizenry.

But the Wahib phenomenon, which echoes the legacy of Zarqawi, has nothing to do with capitalizing on the personal charisma of members or leaders of al-Qaeda, but instead follows the strategy adopted by the organization itself. For Zarqawi’s first public appearance was tied with al-Qaeda in Iraq transforming itself into ISIS and subsequently attempting to control the ground and dominate cities. It thus would not be surprising that Wahib’s appearance is tied to similar objectives.