Moscow believes that Iran's role in the Middle East will only become more prominent in the future, prompting it to further boost relations at the expense of US regional influence. 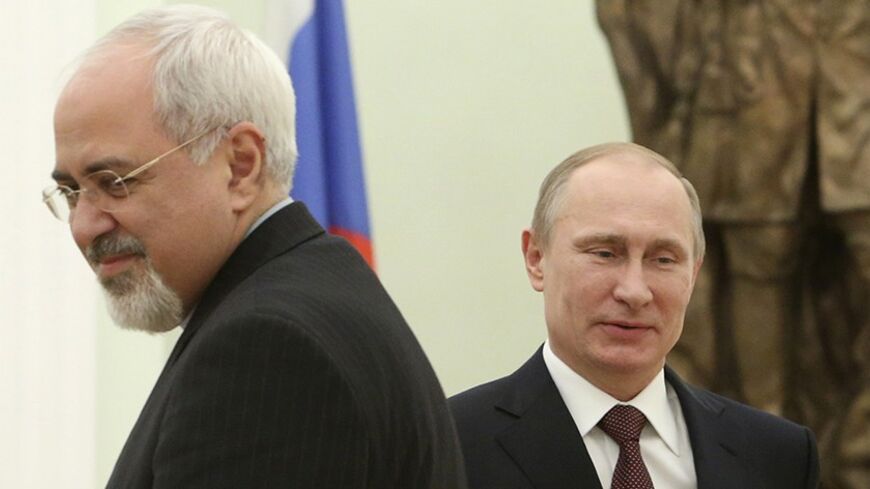 The Geneva II conference to be held next week may be the most intriguing event in diplomacy since the Cold War. On the one hand, this is an example of the cooperation of major countries that want to resolve a regional conflict, each for its own reason. On the other hand, this is a classic "great game," when all participants are afraid to miscalculate and miss out on the opportunities that will arise. All this is happening, yet the result is completely unpredictable. Even the process itself is unpredictable — a few days before the conference is set to begin, it is still unclear who will participate.

It's clear that the near simultaneous arrival to Moscow of the foreign ministers of Iran and Syria has attracted great attention, especially because these negotiations are surrounded by speculation about an alleged impending major deal between Russia and Iran.

The two processes — settling the conflict in Syria and working to resolve the Iranian nuclear issue — have almost merged. The Syrian conflict has moved Russia and Iran much closer together. Before the conflict, Iran believed that Russia certainly did not want to follow in the wake of Western policy — even strongly opposing it — but that it would not go all the way, retreating at the decisive moment so as not to quarrel with the United States. Moscow's uncompromising and consistent position on the Syrian issue for the past three years has become a pleasant surprise for Tehran.

Moscow's and Tehran's adherence to the principle that a change of government in Damascus is impermissible is due to various reasons. For Iran, it is an issue of regional balance of power and its own security, and for Russia it is an issue of upholding certain principles of international order and rejection of US pressure. However, the concurrence of goals is quite solid.

From the standpoint of Russia and Iran, any result of Geneva II — if there is a result at all — will be a success. In early 2013, the most common world view was that the Bashar al-Assad regime was doomed, so Moscow and Tehran would lose in any case, making the “peace process” an opportunity for them to recognize the new reality without losing face. Today, no one is speaking about the imminent collapse of power in Damascus; even some in the United States say this would not be desirable. In other words, over the past year, Western countries strongly shifted toward those who believed from the outset that the overthrow of Assad would be the worst outcome. Compared to the expectations of a year ago, the agenda of the hypothetical peace process itself has changed. Now we are talking about trying to actually find a model for compromise rather than dismantling the regime, meaning that the interests of countries that support Assad should be considered.

Basically, since May 2013 when Russian Foreign Minister Sergey Lavrov and US Secretary of State John Kerry agreed to work on convening Geneva II, the substance of the conference has changed. Now we are actually talking about which forces are ready to discuss the future of a unified, secular Syria. It is clear that the radical Islamist groups are not interested in this, and perhaps, there are forces on the government side that are counting only on a military victory. The first phase of Geneva II will be successful if the participants arrive to take part in a dialogue. Next, it's necessary to determine what they will generally say, and what the range of permissible compromises is if an effort to develop a new model for Syria's political system emerges.

The debate about whether or not to invite Iran to the conference on Syria clearly reflects the fact that the Syrian issue is not unique. If we talk about settling the conflict in Syria, it is absurd to pose the idea that the country that has the maximum influence on the situation in Syria should not be present at the talks. In this case, it is not even necessary to hold negotiations. However, in this case, what is at stake, of course, is not Syria, but US relations with Iran. The Barack Obama administration's attempt to make qualitative changes in these relations has encountered resistance in the United States and, of course, among US allies in the Middle East. Although the potential benefits from escaping this years-long impasse are great, the level of mutual trust is very low, and Washington is very afraid to miscalculate.

In this context, the discussion of an ambitious deal between Russia and Iran, according to which Iran would export significant volumes of oil to Russia and receive technology products in return, puts Obama in a difficult position. It turns out a third country, which is unfriendly to America, will benefit from a rapprochement between the United States and Iran.

Neither Moscow nor Tehran has officially confirmed the negotiations on this deal, but leaks and the tone of discussion on this subject in public suggest that it is not baseless. Russia has its own reasons. Moscow believes that the events in the Middle East will lead to an inevitable increase in the role and influence of Iran. And the change of US policy is not an accident, but it is a recognition of this very fact. This means that, first of all, it is important to have good and promising relations with one of the most influential countries in the region, which can project power into Central Asia and South Caucasus. Second, reversing the isolation of Iran — and the probability of this is now higher than ever before — will turn it into an enviable partner and an attractive market for everyone. In other words, the exclusive status of Russia, which it now enjoys in Iran, will not continue. Preventing Iran from escaping its isolation is to put relations with it at risk. And trying to secure its position in the Iranian market in advance, where the companies from the United States and Europe will immediately enter, is useful and even necessary.

Moscow does not accept Washington's claims that Russia's actions are undermining efforts to solve the Iranian problem because they are reducing the level of pressure on Tehran. There is a long-standing and fundamental dispute between Russia and Western countries about the legitimacy of the sanctions. Russia, like most of the world, only recognizes sanctions adopted by the UN Security Council, such as the sanctions against Iran in autumn 2010. According to the standard practice, right after the sanctions were agreed upon, the United States and its European partners introduced their own sanctions, which are much more stringent than the UN sanctions. They apply not only to the relevant country (Iran in this case), but also to governments or companies of other countries that cooperate with Iran. Formally, they are illegal, and in reality — because of the influence of Western countries on the global system — countries and their companies try not to violate them. At the same time, it is precisely the unilateral sanctions that have a political effect, but they can only be legitimized as part of the collective sanctions process. This is kind of a political trick — if the US sanctions are imposed just by themselves, psychologically they are perceived as less legitimate than when applied immediately after the UN sanctions.

In general, Russia's position in the current conflict is another illustration of Moscow's general approach in the Middle East, which combines a position on world order with concrete interests. However, there are more concrete interests in the Iranian issue than in the Syrian issue.

From the Russian point of view, there is nothing specifically anti-American in an attempt to negotiate with Iran. Moscow proceeds from the fact that Russia and the United States are not allies and will not become allies, therefore, there is no point in counting on them sacrificing their interests to each other for the sake of their partner. But when these interests can be combined, nothing will prevent this. In other words, there are two major powers, which are unfriendly, but not hostile, but they simply do not depend on each other.