The Long Uncertain Road Back to Geneva

If it happens, the Geneva II Conference on Syria will only be a  start in bringing peace to Syria. 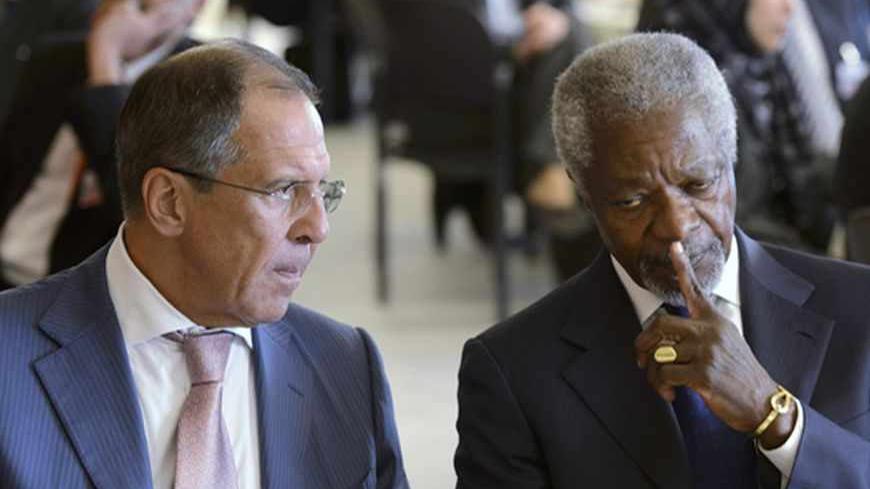 Joint Special Envoy of the United Nations and the Arab League for Syria Kofi Annan (R) speaks with Russian Foreign Minister Sergey Lavrov before a dinner hosted by the Swiss authorities after a meeting of the Action Group on Syria at the European headquarters of the United Nations in Geneva, June 30, 2012. - REUTERS/Laurent Gillieroni

All eyes are now focused on the opening of the Geneva II conference, which Moscow and Washington are trying to convene sometime next month. But it is important for the success of this effort that hopes for Geneva II do not follow the same sorry trajectory as the unrealistic expectations of an Assad defeat.

Geneva I was born in a period defined by widespread, if illusory anticipation of a complete military victory by the opposition. The communique issued by the Action Group on Syria on June 30, 2012, said all the right things. It noted that “Action Group members are committed to the sovereignty, independence, national unity and territorial integrity of the Syrian Arab Republic. They are determined to work urgently and intensively to bring about an end to the violence and human rights abuses, and to facilitate the launch of a Syrian-led political process leading to a transition that meets the legitimate aspirations of the Syrian people and enables them independently and democratically to determine their own future.”

These encouraging words, signaling the creation of a diplomatic “common space” shared by the United Nations, United States, European Union, League of Arab States, China, France, Russia, United Kingdom, Turkey, Iraq, Kuwait and Qatar could not be translated into effective diplomacy as long as the alluring prospect of Syrian President Bashar al-Assad's military defeat continued to seduce policymakers in the West and among the opposition's regional supporters.

For almost six months now, Russia and the United States have labored to create a consensual diplomatic structure that can tame and limit the increasingly brutal — if strategically indecisive — war on the ground. Even if Geneva proves stillborn — a very real possibility — the conflict has nevertheless been irrevocably transformed. The context in which all parties are making decisions has changed. On the one hand, arming the rebels is now becoming a function of the effort to improve the opposition’s position at the negotiating table rather than in anticipation of an improbable, if not impossible, military victory on the battlefield. On the other hand, regime supporters have been disabused of the hope for absolute victory and are looking to elections scheduled for 2014.

Geneva II signals that neither the United States nor Russia is basing policy on a knock-out blow. Other significant players — Iran, Egypt, Turkey, Saudi Arabia — are themselves challenged by failure of respective Syrian clients to prevail militarily. Geneva II offers them a forum to move their pieces from the battlefield and to translate their respective and often conflicting interests into a diplomatic solution.

Understandably, many in the opposition and among its supporters cannot abide such a change in the landscape that defines the conflict. Assad for his part is consolidating and extending where possible the reach of his power on the ground — a strategy of attrition that will also be tested by Geneva II.

Long ago, because of this conflict, Syrians lost the sovereign power to command the destiny of their country. And as long as each side is wedded to military victory this loss can be exploited by the Geneva process to increase the effectiveness of diplomacy.

Yet, just as it was a mistake to exacerbate the conflict by unfounded expectations of a quick military victory, it would be equally ill-informed to view the reappearance of a diplomatic trajectory for addressing the war as absolute and decisive.

Talking and fighting are not necessarily contradictory strategies. In the Syrian context the creation of a diplomatic track might well instigate further battlefield conflict.  Look at the destruction unleashed during the Paris Peace talks between the United States and North Vietnam in the 1970s. In December 1972, President Richard Nixon ordered the “Christmas bombing” throughout North Vietnam. The United States dropped at least 20,000 tons of explosives on North Vietnam, killing more than 1,000 Vietnamese. Nixon could not hope to defeat the North but rather tip the terms of a negotiated agreement in Washington's favor. One month later, an agreement was reached that led to an end to US involvement in the war.

The importance of Geneva is that it signals not only continuing incremental progress toward a reconciliation of Russian and US views on a resolution of the conflict but also an intent to increase the attraction of “win-win” rather than “zero sum” outcomes. So, for example, Col. Salim Idriss, the Chief of Staff of the Free Syrian Army Revolutionary Military Council, told Asharq al-Awsat on May 3 that he was ready to negotiate the interim political phase in Syria with the officers of the regular army “who did not issue orders to shoot the civilians."

Witness on the US side the sobering up on Iran. While Washington has yet to publicly support Iran's participation at Geneva, its decision not to foreclose this option compares well with the absolute rejection of any Iranian role in resolving the conflict during Hillary Clinton's tenure as secretary of state.

Neither Russia nor the United States want Geneva to fail. Nevertheless, a clear outcome should not be expected from Geneva II, or perhaps even from Geneva XX. Such efforts are best measured in ambiguous shades of gray. The key to understanding both the challenges faced in Syria today and the prospects for a negotiated outcome is not to be seduced by the idea that conferences such as Geneva II will soon end the slaughter or even succeed in winning guidelines for its resolution.

Throughout this war a changing array of signposts have been imagined by those seeking to impose an orderly narrative on the conflict. Failed "tipping points," and unrealized "no fly zones" risk being replaced by equally artificial magic pills that reflect hopes and fears for an agreement more than the messier realities on the ground. Geneva II is less a destination for a resolution of the conflict than one initial way station on what promises to be a long, bumpy and all-too-bloody journey.