US-Russian cooperation will be key to success at Geneva II. 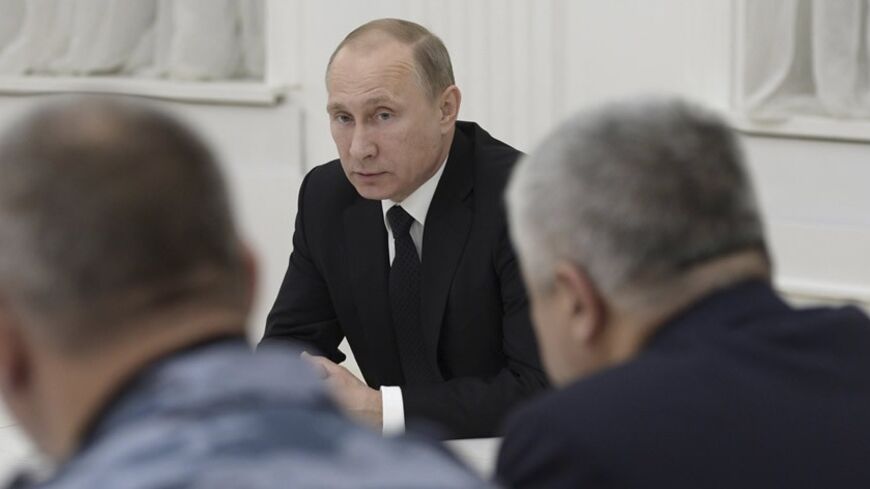 Russia's President Vladimir Putin chairs a meeting on the aftermath of the recent bombings and security measures at the regional administration headquarters in Volgograd, Jan. 1, 2014 - REUTERS/Alexei Nikolskiy/RIA Novosti/Kremlin

As the date of the Geneva II conference is approaching, the need for the United States and Russia to overcome their differences and stand together in facing one of the toughest challenges to international peace and security of the last decades — the Syrian crisis — is becoming more urgent. In 2013, Moscow and Washington achieved a lot in unifying their positions toward a number of developments in the Middle East. They successfully started the process of ridding Syria of its chemical weapons stockpiles. They constructively cooperated in the dialogue between the P5+1 and Iran. They agreed on the necessity to solve the Syrian crisis exclusively by political — not military — means, and convinced the conflicting sides to participate in a peace conference. From my intensive contacts with decision-makers, diplomats and strategic analysts on both sides — including my recent meetings in the US capital — I understand that Russia and the United States share the same view of Geneva II only being the beginning of a long process. And at this stage to bring the parties to the negotiating table and keep them there, while also continuing dialogue, is already an achievement. Neither side is expecting quick results on the path of political transition in Syria. Speculating about possible outcomes of the conference, which primarily depends on the level of commitment of the Syrian parties, one should still try to determine what Russia and the United States agree and disagree on at this point.

There are certain real disagreements between Washington and Moscow as well as misperceptions about disagreements — some of them imaginary.

For instance, there is a disagreement about the issue of humanitarian aid. Of course I can only express my personal understanding of the Russian official view as it exists now. First, Moscow fully shares concerns about the suffering of the Syrian population, especially in the areas where fighting is taking place, and the acute need for humanitarian aid. Moscow has provided humanitarian assistance to certain areas. Second, Moscow finds a lot of hypocrisy in the position of those international partners who call for providing humanitarian access to the locals and at the same time are suffocating them with economic sanctions, thus contributing to their suffering. Third, as we can judge from the Libyan case, humanitarian corridors can be used for forwarding weapons and fighters — including international terrorists — who are already flowing into Syria from Turkish territory, funded by some regional sponsors. Having said that, I cannot exclude the possibility of achieving progress in solving this problem.

Disagreement about handling the issue of international terrorists in Syria is partly imaginary. My US interlocutors criticized Russia for its assumed desire to put this issue on the table. However, Moscow is basing its approach on the results of the last G-8 summit in Great Britain, where British Prime Minister David Cameron raised this issue calling for combining efforts in combating terrorism. Cameron was strongly supported by US President Barack Obama and Russian President Vladimir Putin. Thousands of terrorists are participating in the fight against the regime under the banner of jihad, among them fighters from European states such as France, Great Britain, Belgium and so on, as well as from Russia. The number of jihadists from the Chechnya region alone is reported to have reached 250, and Tarkhan Batirashvili (half Georgian, half Chechen), who acquired his war skills in the Georgian army, became notorious as one of the most cruel jihadist commanders. The recent terrorist attacks in the south of Russia are directly or indirectly related to the Syrian civil war, where terrorists receive training and combat experience. There is no doubt that the international jihadists who are fighting in Syria now — at least those who will survive — will sooner or later turn their weapons against other targets, including the United States and Russia. I believe that our governments are equally aware of this tremendous threat.

In any case, Russian decision-makers and diplomats do not share US illusions about the difference between terrorists fighting in Syria with an international agenda and those with a local agenda. In the Russian view, the difference is not so significant that the Islamic Front, which US officials are in contact with, can be qualified as a moderate group, as opposed to the Islamic State of Iraq and the al-Sham (ISIS) as an extremist and terrorist group. Members of the Muslim Brotherhood in Egypt, whose organization has been declared a terrorist organization by the Egyptian government, are almost doves if compared with members of the Islamic Front.

One of the points of the Russia-US disagreement is the issue of non-Syrians fighting on the side of the regime, mainly from Hezbollah. While our US partners are repeating the call of Syrian opposition leaders for the withdrawal of these forces, Russia can agree to this demand only if and when the simultaneous withdrawal of all other foreign fighters, including jihadists, can be fully secured. I am afraid this is not quite feasible given the absence of one command for these fragmented groups and a strong desire of some regional actors to support them in order to weaken the role of Iran in this part of the region.

By the way, Russia has always been in favor, as far as I can determine, of including Iran among those states that should be invited to Geneva II. The position of the United States — taken under the influence of its regional allies — in this regard is shortsighted. I cannot imagine that Tehran is ready to accept the proposed humiliating role “from the sidelines.” Iran is a legitimate player in this crisis and of no less importance than Turkey, Saudi Arabia or Qatar, and it can be a spoiler as well, if need be.

One of the misperceptions is connected to the fate of Syrian President Bashar al-Assad. Lots of US analysts and even decision-makers whom I met are certain that this is one of the major disagreements between the United States and Russia. That is not true. What is true is that Obama already at the very early stage of the conflict in 2011 said, “Assad must go,” and the US administration has still to repeat that there is no place for him in the political transition. But Russian diplomats whom I meet stress that the contradiction here is not between the United States and Russia but between the United States and Syria: the US wants Assad to resign but he does not want to. Russia simply has nothing to do with that. It is up to the Syrians to decide who will rule them. Quite a number of my US interlocutors told me that the Russians have to go to Assad and — on behalf of the Americans and some other leaders — tell him “to go.” But when in response I asked for more details, to my great surprise, I found out that they had no vision of how it could be done — where he has to go, why, who should replace him and so on.

The sooner the Americans and the Russian bridge the gap between them, the better for the process.