Russia seeks to place its Kurdish policies in the broader context of a changing Middle East. 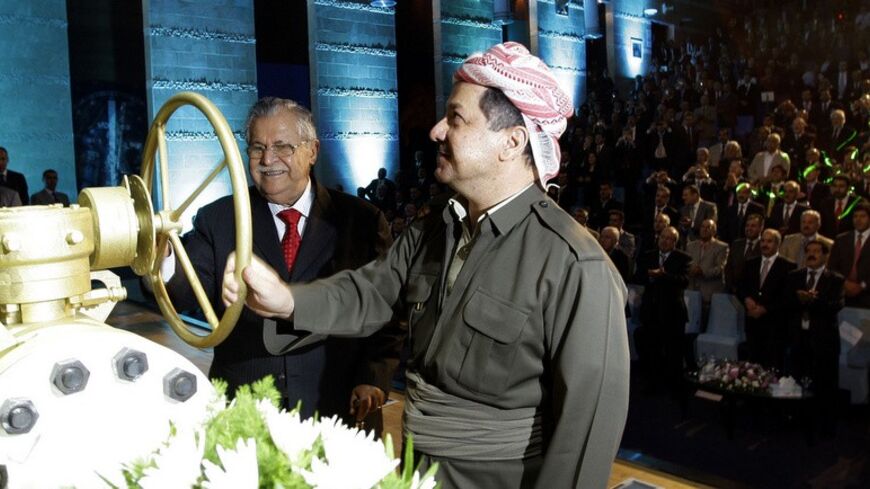 Kurdish President Massoud Barzani (C) and Iraqi President Jalal Talabani open a ceremonial valve during an event to mark the official start of oil exports from the autonomous region of Kurdistan, in the northern Kurdish city of Erbil, June 1, 2009. - REUTERS/Safin Hamed/Pool

When a couple of days ago the Kurdistan Regional Government of Iraq (KRG) decided to grant the citizens of the United Arab Emirates, Qatar and Kuwait the right of non-visa entry to the region, it further worsened Erbil and Baghdad's relationship after many attempts to improve it. As a Kurdish activist explained to me, this step is a sign of “the Kurdish awakening” and a necessary measure to secure full “economic self-reliance” in the region.

For some analysts here in Moscow, this act represents more than that. It can be interpreted as an expression of the KRG’s plan to achieve full independence, at least in the distant future. An Iraqi representative in Moscow, who preferred to remain anonymous, told me earlier this week that the Iraqi government was especially concerned about the provision of free access to Iraq — without Baghdad's approval — for the citizens of Qatar, given the Qatari attitude toward the Iraqi government. Qatari politicians and media regularly accuse Iraqi Prime Minister Nouri al-Maliki of supporting President Bashar al-Assad’s regime in Syria and discriminating against Iraq's Sunni community.

New tensions between Erbil and Baghdad are further complicating Moscow’s objective to equally develop broad cooperation with both the central government of Iraq and the KRG.

Russia has a long history of friendly relations with the Kurds. They still remember Moscow's support for the Kurdish Autonomous Republic declared in Mahabad (Iranian Kurdistan) on Jan. 22, 1946, as well as Russia giving refuge to Mulla Mustapha Barzani, the famous Iraqi Kurdish leader who crossed the Iranian-Soviet border on June 18, 1947, and then spent 12 years in Russia.

As KRG President Massoud Barzani said during his Feb. 12, 2013, visit to our Institute of Oriental Studies, during his first official visit to Russia, “Moscow opened up to Kurds at the time when all doors in the world were closed to them.” He estimated there are 45 million Kurds and called them "a divided nation."

“However, we know well that there is a real world in which we live, and we have to take this reality into account. The Kurdish nation is not of less importance than the Turkish or the French one,” he said. He stressed the significance of the Iraqi federal system for the Kurds, praised Turkey for its attempt to solve the Kurdish problem and mentioned that in Iran the Kurds are deprived of their rights.

By the way, after the beginning of the popular rebellion in Syria, Assad granted citizenship to about 200,000 Kurds who had been deprived of it under the rule of his father and during more than a decade of his rule. He also permitted the use of the Kurdish language in their schools. This means that no government can give the Kurds less than that. Barzani also emphasized that, with any changes in Syria, the rights of the Kurds have to be protected.

Barzani’s official visit attested Moscow’s decision to diversify its economic cooperation with Iraq. The Lukoil giant is already exploring the West Qurna-2 field, but another giant, Gazprom Neft, followed ExxonMobil, Chevron and Total SA, which had outrun them in Kurdistan, by signing agreements with the KRG. In 2013, Gazprom Neft was planning to invest $1 billion in Kurdistan until 2015. Needless to say, Baghdad's reaction to this deal was negative, but the KRG’s reaction toward the Russian arms deal with Baghdad was not favorable either. So far, all these deals involve certain risks.

Any diversified policies toward Turkey and Syria related to the Kurdish issue are also accompanied by risks. In this decade, Turkey turned into one of Russia’s main economic partners. The volume of trade between the two is expected to reach $100 billion next year. Moscow and Ankara agreed to close their relations accordingly with the Kurdistan Workers Party (PKK) and the Chechen separatists, demonstrating their common interests in combating terrorism and protecting their territorial integrity. However, Russia has not put the PKK on its list of terrorist organizations because the group does not threaten Russian security. (One can suggest that Moscow is also avoiding steps that can damage its relationship with the Kurds.) In Russia, the Kurds are regarded as a moderate Sunni force of great importance in confronting jihadists, who represent a serious threat to the national security of Russia.

Despite all that, disagreements between Moscow and Ankara about Syria revitalize old suspicions. Sedat Laciner, rector of Turkey’s Canakkale University, said, “Russia, Iran and Assad’s Syria see the the PKK among the most important tools for stopping Turkey in the region.” Russia is also suspected of close cooperation with the most influential party of the Syrian Kurds — the Democratic Union Party (PYD). Professor Beril Dedeoglu of Galatasaray said this is not a surprise since the PYD is "struggling against Jabhat al-Nusra."

When Salih Muslim, PYD co-chair, came to Moscow for meetings with Russia’s Foreign Affairs Ministry, unconfirmed rumors circulated in the media that the Russians were in favor of the PYD joining the Geneva II conference under the umbrella of the National Coordination Committee for Democratic Change in Syria.

In general, Russian policymakers constantly stress the importance of engaging Syrian Kurds in the Syrian talks. First, it reflects Russia’s general strategy of broadening the makeup of the participants in this process by incorporating all segments of Syria. Second, it demonstrates Russia’s concern for the integrity of Syria. Third, it manifests Russia’s sympathy toward the Kurds and their national aspirations.

Though the declaration of Kurdish autonomy around Qamishli was met with some anxiety, Moscow remained calm, as long as there was no indication of Kurdish intention to secede from Syria. It was logical that Russian Foreign Minister Sergey Lavrov emphasized this issue in his press conference in Montreux after the first day of the Geneva II talks.