Will Geneva II go the way of Vietnam peace talks?

The Geneva negotiations have yet to resolve many differences in form or substance between the government and opposition delegations. 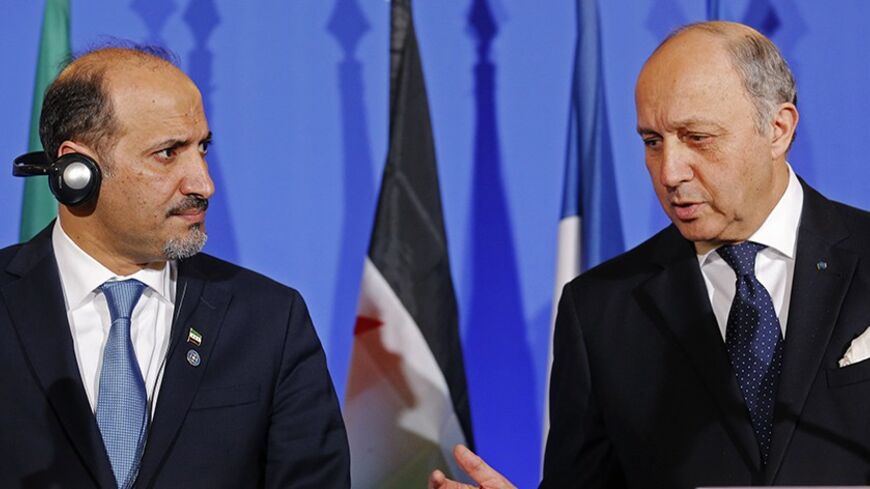 A former Lebanese government minister, while relaying to Al-Monitor what he had heard in Damascus regarding the outlook for the upcoming Geneva II conference, invoked stories from the Paris peace talks on Vietnam in 1968 and 1969. According to him, the initial disputes that arose surrounding the Vietnam talks threaten to be an issue in Geneva as well.

There are a number of unresolved matters of protocol separating the regime and its opponents — the two parties who will be negotiating in Switzerland at the talks beginning Jan. 22 — starting with which flags will be present at the negotiating table. The regime of President Bashar al-Assad is demanding the official Syrian flag, while the opposition has adopted the “revolution flag.” The Syrian authorities consider the flag that appeared in Syria after the rebellion began in March 2011 to be a remnant of the era before Syria’s independence and a symbol of the French mandate over the country. Thus they view that flag as symbolizing a violation of Syria’s sovereignty, independence and, in particular, its unity.

During a visit to Beirut on Jan. 12, Syrian National Reconciliation Minister Ali Haidar, a figure from the “internal opposition,” told Al-Monitor that the frame of reference for the Geneva process is the wording in the Syrian Constitution. Of note, the design of the Syrian flag is provided in Article 6, thus it is not acceptable that any other flag be raised.

The former Lebanese minister, who has close ties to Syrian authorities, said that in addition to the flag issue, he had heard about disagreements involving name tags for members of the two delegations. Opposition members are clinging to their new, revolutionary titles. For example, Ahmad al-Jarba calls himself the head of the National Coalition for the Revolutionary and Opposition Forces in Syria, with the rank of head of state. His coalition has been given Syria’s seat at the Arab League. Moreover, the oppositionists are embarrassing some conference sponsors by noting that it is the sponsors themselves who recognized Jarba as the head of the National Coalition and received him in various capitals as a head of state. How can they now expect him to behave differently at the negotiating table?

Speaking to Al-Monitor, Haidar mockingly suggested that Jarba not attend Geneva II because it is convening at the foreign ministerial level. Thus, Jarba should send his “foreign minister” as the diplomatic counterpart to Syrian Foreign Minister Walid Moallem, who will head the regime’s delegation. This problematic issue spills over into related matters, such as the order of the speakers. Jarba may ask to be the first speaker after UN representative Lakhdar Brahimi, but Moallem will likely not accept that Jarba goes first.

Another point of contention, as with the Vietnam negotiations, concerns the shape of the table. Will it be a round table? Will reaching agreement on the table then move on to questions of seating arrangements on both sides of Brahimi?

Despite the relative importance of these formalities, the content of the Geneva II conference remains what is essential. Haidar asserted from Beirut that the conference will not extend beyond presenting various working papers. He revealed that Moallem will present a working paper prepared some time ago by the Syrian authorities. The opposition is still squabbling over its negotiating team members and may not be able to agree on their working paper.

Haidar also said that the internal opposition did not receive an invitation to participate, but that a delegation, headed by former Syrian Vice President Qadri Jamil, was set to meet Russian Foreign Minister Sergey Lavrov on Jan. 20 to discuss how Moscow envisions the group's participation. In any case, Haidar does not think Geneva II will make any progress. He described it as a picture that several parties want to impart, with the possibility that the conference will mark an uncertain beginning for a long negotiating process whose conditions for success have not yet ripened.

According to Haidar, the official Syrian delegation will present a clear vision of its principles and priorities. He said that Moallem’s working paper includes Damascus’ demands that everyone agree on fighting terrorism and preventing outside interference in Syria. It goes on from there to what was agreed to in the Geneva I declaration regarding the formation of a transitional governing body.

Haidar asserted that the official Syrian working paper is based on the Geneva I document, which holds that the solution to the crisis will be purely Syrian. According to Damascus, most leaders of the Islamist groups fighting in Syria today are not Syrians. This, the regime argues, is a direct result of foreign intervention in the conflict. Therefore, the official delegation will conclude that the first step in implementing the Geneva I document is to halt external interference and eliminate terrorism, which would allow renegotiating the transitional governing body back into Syrian hands.

The former Lebanese minister said that what he heard in Damascus is that Geneva’s negotiating framework will be expanded and made more comprehensive. If that happens, the framework expansion may take place way from the negotiating table and away from the media. The public discussion is now over three points that the regime’s delegation hopes to consecrate: confronting terrorism, getting urgent assistance to the displaced and those affected by the fighting and declaring a cease-fire or at least stopping military activities between the warring parties.

Regarding the serious issues, the former minister said that he had heard talk about efforts to form a five-member committee to discuss them. That committee would include representatives of Ankara, Moscow, Riyadh, Tehran and Washington.

Despite all the talk and expectations, the Vietnamese Paris negotiations stand as a possible model for those discussing the Syrian talks. In the first attempt to resolve the Vietnam crisis in Geneva in 1954, Vietnam’s division was recognized. In the later attempts, in Paris in the late 1960s and early 1970s, the negotiations were a facade for developments on the ground, which ended with a victor and a vanquished. Will one of the two models apply to the Syrian issue or will the concerned parties go a third way?