The National Coordination Committee for Democratic Change, the leading internal Syrian political opposition group, may be left out, or opt out, of the Geneva II delegation. 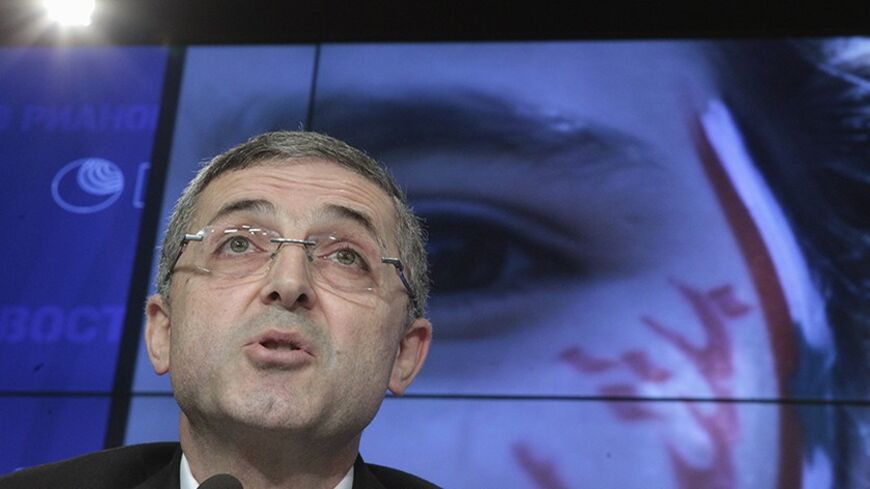 Haytham al-Manna, a senior leader in the National Coordinating Committee for Democratic Change (NCC), was quoted by Al-Mayadeen as saying that the group would not attend the talks in Montreaux on Jan. 22.

The NCC — an internal umbrella opposition grouping a number of left-wing and nationalist parties — had hoped it could coordinate with the Syria National Coalition to finalize a unified delegation to attend the talks.

“We called on them to coordinate with us,” Ahmad al-Esrawi, a member of the NCC’s Executive Bureau, told Al-Monitor, adding that the coalition has yet to reply.

It is unclear whether the NCC has taken a definitive stance not to attend the talks, with Esrawi keeping the door ajar to cooperation with the coalition.

“We are ready to coordinate with all opposition factions to go to the Geneva II talks as part of a unified delegation. It is not about participating in Geneva, but about what we can achieve for the Syrian people,” he said during a phone interview from Damascus.

Ali Haidar not to attend

According to a senior official in the Syrian Social Nationalist Party (SSNP), Ali Haidar, minister of national reconciliation and head of the SSNP, will not attend the talks due to differences with the coalition.

“He [Haidar] will not be with the government delegation, definitely. As long as there’s one delegation headed by the coalition, we’re not going. Absolutely not,” Elia Samaan, senior SSNP official, told Al-Monitor by phone from Damascus.

The SSNP, although part of the government, considers itself an opposition party, and had sought a “homeland opposition delegation” with the NCC, with whom “we share the same vision, the same agenda for the future of Syria.”

The NCC has been a staunch proponent of dialogue with the Syrian regime to resolve the conflict since the beginning of the crisis.

The group has been frequently sidelined by other opposition groups, however, for its insistence on engagement with the Syrian government to find a political solution to the crisis.

“We came up with the idea of holding a peace conference for Syria in the first place. We even addressed the UN, the Arab League and the EU, because it was crucial to hold an international conference,” Esrawi said.

“We were the first party to support the decisions of Geneva I and to call on holding a Geneva II conference to implement these decisions. This is why it is just normal for us to participate,” he added.

Three years into the conflict, the Syrian opposition has failed to reconcile differences and form a unified position for engagement with the Syrian regime.

Syria’s external and internal opposition organizations have been at odds since the crisis began in March 2011, as both sides have sought to delegitimize the other amid few attempts to iron out differences. Many wonder how an opposition can reach an agreement with the regime when it is struggling to reach consensus among its own ranks.

“It’s a fact of life that this [internal] opposition, no matter how they [the coalition members] look at it, it exists, it has support in the street, it has popularity among Syrians today. You cannot ignore it and expect success from Geneva,” Samaan added.

The Syrian regime appears to be in the advantageous position heading into Geneva II, as its political opponents bicker for a place at the talks and its military adversaries battle it out in rebel-held areas.

Its list has been finalized, according to a leaked final delegation circulating on social media, with Syrian Foreign Minister Walid Muallem set to head the regime contingent.

The National Coalition is due to meet in Istanbul on Jan. 17 to vote on its participation in Geneva II.

Despite the opposition’s stumbling to the talks, foreign powers are still insistent on the Geneva II formula as a means to end the bloody war that has so far claimed the lives of more than 130,000 people.

"There is no military solution to the violence that has displaced millions and taken more than 130,000 lives," US Secretary of State John Kerry told reporters at a press conference following the Friends of Syria meeting in Paris on Jan. 12.

Kerry urged the regime "to put in place before Geneva a cease-fire — local cease-fires if necessary" to "signal that they are prepared to set a different mood" ahead of the talks.

The call for a cease-fire received a boost from Russian Foreign Minister Sergey Lavrov, who said at a joint news conference with Kerry and UN special envoy Lakhdar Brahimi on Jan. 13, "We are going to try to send the signals to all the Syrian sides on the need of establishing at least localized cease-fires."

Speaking on the disputes within the political opposition, Lavrov called on the coalition to "determine its attitude to cooperation with other opposition groups so that the opponents of the government, the opposition to the government, is representative, as it was last year."