Syrian official sources are considering taking up the offer for talks with opposition leader Moaz al-Khatib, head of the National Coalition for Syrian Revolutionary and Opposition Forces, Antoun Issa reports from Damascus. 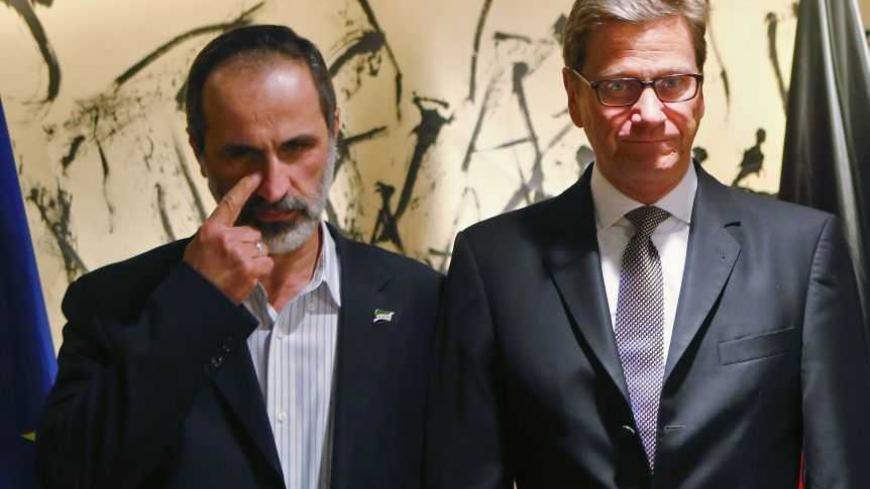 The Syrian government may be receptive to opposition leader Moaz al-Khatib’s offer for dialogue earlier in the week, with one official calling it a “positive change.”

Khatib — head of the National Coalition for Syrian Revolutionary and Opposition Forces — surprised colleagues with a public announcement on his Facebook page on Wednesday, Jan. 30, offering dialogue with the Syrian regime.

The Syrian National Council (SNC), a member of the coalition, quickly rejected Khatib’s call, but regime sources have not ruled out dialogue with Khatib.

“There’s been no official statement from the regime, but some individuals within the regime are saying ‘OK, why not?’,” a Syrian government official told Al-Monitor on condition of anonymity.

The SNC has long rejected negotiations with the regime until President Bashar al-Assad either resigns or is forced from office.

Khatib’s offer signals a clear divergence from the SNC, but a convergence with Syria’s internal opposition, the National Coordination Committee (NCC), as noted in the Lebanese daily Assafir this week.

The NCC, and its senior leader, Haytham Manna, have been at odds with the SNC throughout the two-year crisis, insisting on a political solution without external interference to resolve the crisis.

But Khatib's statement risks increasing fractures within an opposition already riddled with divisions — a fact noted in Damascus.

“We have contacts with the coalition, with the moderate voices. They’re hesitant, some supportive [of Khatib’s initiative],” the official said, adding that the government had yet to establish direct contact with Khatib.

Syria’s minister of national reconciliation, Ali Haidar, has repeatedly invited opposition groups to an unconditional dialogue, and in a recent interview with Al-Monitor repeated his call for the exiled opposition to drop its demands for Assad’s resignation.

Khatib appeared to do just that, listing only two conditions for talks: the release of 160,000 prisoners and the issuance of new Syrian passports to those that have expired.

“It’s a positive change, and hopefully it can carry on,” the official said, highlighting that Khatib did not call for Assad’s dismissal.

The government is also open to Khatib’s offer of holding talks “in Cairo, Tunis or Istanbul."

“No problem [with dialogue outside of Syria], we will discuss anything, anywhere. We are willing to discuss,” the official said.

While there was cautious optimism in Damascus at Khatib’s statement, the chances of an agreement is dependent on an international deal, the official explained. The regime was expecting a change in the coalition’s stance, according to the source, after it failed to secure pledges of weapon supplies from foreign powers at the Paris summit on Monday.

A meeting is due to be held in Munich on Saturday between Khatib, US Vice President Joe Biden, UN special envoy Lakhdar Brahimi and Russian Foreign Minister Sergei Lavrov, according to a Reuters report citing the coalition. Russia, however, denied it would participate in the meeting.