Representatives of the Syrian National Coalition concluded the Geneva II peace talks in a "positive spirit," although there are still questions about the group’s influence with armed groups and the opposition inside Syria. 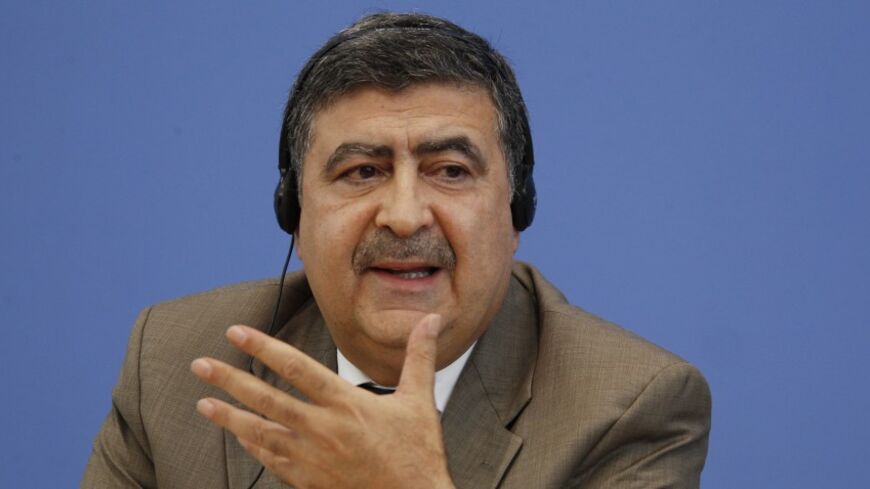 Syrian National Council member Murhaf Jouejati speaks at a news conference on Aug. 28, 2012, in Berlin, where he and two other members of the Syrian opposition presented the results of the project "The Day After: Supporting a Democratic Transition in Syria." - REUTERS/Thomas Peter

GENEVA — The Syrian National Coalition left the Geneva II talks with “momentum” and a “positive spirit,” according to opposition negotiator Murhaf Jouejati.

“What we did here was positive in general,” Jouejati told Al-Monitor in Geneva.

“There is still a very large gap, but nobody walked out, nobody torpedoed these talks,” he said.

Jouejati gave a more positive spin at the end of the talks than UN special representative Lakhdar Brahimi, who conceded at the Munich Security Conference afterward that “there was no progress.”

As reported by Al-Monitor, the National Coalition of Syrian Revolutionary and Opposition Forces (also known as the Syrian National Coalition) suffered serious internal divisions upon its decision to participate in Geneva II, but Jouejati was hopeful many skeptics of the Geneva process would return to the fold.

“It was more a psychological barrier that we broke. Now you have many former critics who are on board. I do expect many to come back to the Etilaf (Syrian National Coalition),” he told Al-Monitor in Geneva.

Geneva II offered an opportunity for the coalition — long fractured by internal bickering — to present itself at the highest level of international diplomacy and restore relevance to a political opposition sidelined by the growing power of armed factions on the ground.

“This process that took place in the past week has increased not only the exposure of Etilaf but also its legitimacy,” Jouejati said.

It was the first time external Syrian opposition members engaged in face-to-face dialogue with the Syrian government, testing their abilities as politicians in the toughest of environments.

“It’s a learning curve and a crash course in conducting politics. It’s an opposition that never did politics in Syria before,” Yazan Abdallah, a UK-based Syrian academic in Geneva observing the talks, told Al-Monitor.

While the coalition is taking positives out of Geneva II, the talks also exposed challenges for Etilaf, notably closing ranks with other opposition groups and armed factions.

Abdallah agreed that Syrian National Coalition members need to expand their reach. “They represent a very narrow faction of the opposition, and [Geneva II] uncovered their weakness and a deficient representation within their ranks,” he told Al-Monitor.

The coalition needs to focus its efforts ahead of the next round of talks on expanding its delegation to include other opposition forces, including the National Coordination Committee for Democratic Change in Syria (NCC), Abdallah said.

“There is a genuine Syrian opposition that has a history,” Abdallah said, referring to the NCC, an internal umbrella organization encompassing a number of left-wing and nationalist opposition groups, “An important example is the fact that they (coalition members) carried the picture of [detained NCC deputy leader] Abdelaziz al-Khayyer on the first day of the talks. This, in a way, implies an admission that they lack credibility and they need to appeal to the Syrian people.”

Crucially, it remains to be seen whether the coalition is able to win the backing of key rebel groups that hold much more sway on the ground in Syria. The Istanbul-based political opposition has struggled to exert influence on armed groups, and is dependent on their support for the implementation of any agreement.

The Syrian National Coalition faces a tough task in trying to convince the NCC to join its delegation ahead of the next round of talks, with senior opposition figure Haitham al-Manna again ruling out his participation.

“I’m not going to Geneva. Yesterday, two people from the coalition asked me [to participate in the next round of talks]. Personally, I cannot participate in such a comedy,” he said during a phone interview from Paris.

The failure of the Geneva talks to produce an agreement, including a humanitarian effort to alleviate the crippling siege of Homs, reinforced the NCC’s position to steer clear of the process.

The coalition was not the only force to take positives from the talks.

For the government, Geneva II signaled its return to the international stage after three years of being shunned by much of the world.

While the regime held firm on the transitional governing body and the role of Syrian President Bashar al-Assad, its acknowledgment of the Geneva I communique, albeit with reservations, was seen as a victory from the coalition’s perspective.

“They are tied to it [Geneva] now, which means they’re going to have to discuss issues such as which is the most important in the establishment of a transitional government body,” Jouejati said.

Syrian Foreign Minister Walid Moallem appeared to lay the groundwork for any upcoming talks on this issue during his interview with Al-Monitor, calling for a “national unity government” within the current constitution.

Despite resisting pressure to engage directly on a transitional governing body, it is in the regime’s interests to eventually establish one, according to Abdallah.

“It’s in the interests of the current government to subscribe to a transition because it restores legitimacy. It’s very important, especially at a time when you’re trying to fight terror and you need an international accord.”

Syrian National Coalition head Ahmad al-Jarba is heading to Moscow on Feb. 4 for talks, while the government delegation returns to Damascus for consultations.

Both sides have hinted at returning to the next scheduled round of talks on Feb. 10, with Moallem saying during his press conference on Jan. 31 that “if the orientation is to come back, we will come back.”

The coalition faces an arduous task in convincing other opposition forces to join its delegation, and without a strong, unified opposition delegation, it seems difficult to envision progress in the talks.

The NCC is scheduled to hold a “consultative meeting” this month in Cairo, inviting independent, democratic Syrian opposition figures, Manna told Al-Monitor. No date has been specified as yet.

As far as the government is concerned, Manna said its delegation needs to be broadened to include other parts of the regime, not simply Assad's hard-core supporters. This includes other political parties participating in its government, such as the Syrian Social Nationalist Party, and voices of regime moderates such as Farouk al-Sharaa.

It also needs to be empowered, according to Abdallah, to be able to seriously discuss all details of the Geneva I communique, including the transitional governing body.