The Geneva II conference may not achieve even minor agreements, much less peace. 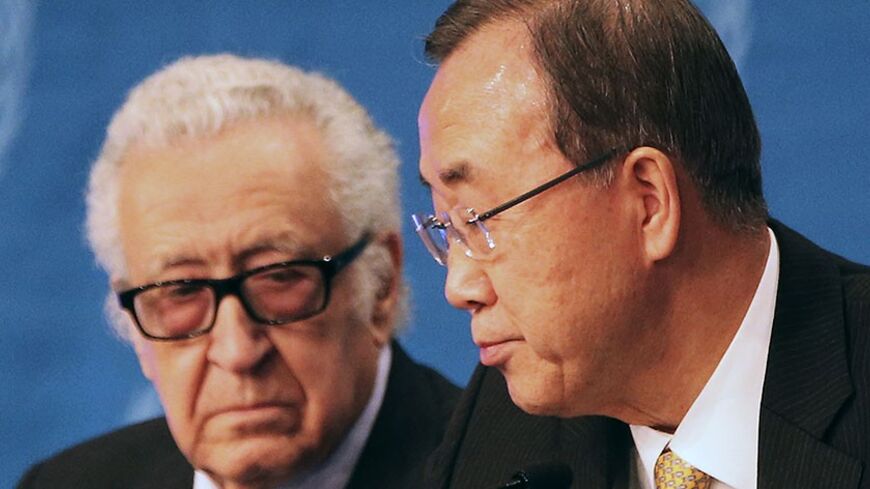 A senior Arab diplomat who followed the Geneva II conference in its first days said that the current impasse was evident from the outset, and that the way out was clear to the conference’s broker, Algerian diplomat Lakhdar Brahimi.

The diplomat, who left the Swiss city of Montreux two days after the conference opened on Jan. 22, told Al-Monitor that Brahimi was never deluded about the talks' prospects. Before the conference began, Brahimi had conducted many contacts with the Syrian forces involved as well as with the foreign powers sponsoring the conference and those supporting any of the parties to the Syrian conflict. So Brahimi went to Montreux fully aware of what awaited him. He knew that the two sides’ working papers didn’t intersect on any of the basic points.

The Syrian opposition is focused on a single point in the Geneva I communiqué: the formation of a transitional government with full executive powers. The Syrian opposition came to Switzerland in order to implement the practical steps to form such a government and work out a timeframe for it. Some in the opposition delegation even envisioned a one-year time table for the transfer of all powers, the writing of a new constitution and the holding of parliamentary and presidential elections. The diplomat heard some opposition members express confidence that President Bashar al-Assad will have no influence on the developments once his presidential term ends in June.

In contrast, the diplomat said, the official Syrian delegation had a completely different reading of the Geneva I communiqué. The regime representatives hold that to secure Syrian leadership for the peace process, the priority must be to stop outside interference and prevent the transfer of arms, ammunition and fighters to Syria — in other words, turn Geneva II into an international coalition against terrorism in Syria. After that, the Syrians will then decide the fate of their regime, policies and people. This means that the official delegation rejects Assad’s exclusion from a future solution.

According to the diplomat, given these two contradictory working papers, Brahimi fell back to his negotiating experience with the Lebanese in the late 1980s. He proceeded to propose discussions on small and minor issues in order to put out feelers, to avoid total failure and to lure the two delegations into more direct interactions.

But the diplomat's attempts soon collided against a series of negative positions. For example, he revealed that the official Syrian delegation appeared suspicious of the safe humanitarian corridors for two reasons. The regime's representatives fear that the corridors could be used to supply the armed groups under siege or legitimize outside interference in Syrian affairs.

Brahimi quickly realized that it would be difficult to achieve a breakthrough on those points. But reaching a cease-fire will not be much easier. It seemed that the two parties have different priorities for the cease-fire for military and geographic considerations.

The opposition delegation, for example, wants to start the cease-fire in Homs, where things are clearly going in the Syrian army’s favor and a cease-fire would give oxygen to the opposition’s armed groups. The official delegation wants to start the cease-fire either in the Aleppo area or in Daraa, near the border, as a test of outside intentions about meddling in Syrian affairs and to stop the flow of support and supplies for opposition fighters. Ending the hostilities in Daraa means ending the support for fighters across the Jordanian border. The same goes for Aleppo and the Turkish border.

But more importantly, said the diplomat, Brahimi soon discovered that neither of the negotiating delegations have the technical knowledge, practical ability or authority to implement a cease-fire decision.

The diplomat concluded by saying that Brahimi will conserve his energy during the remaining Geneva II sessions and that he would seek to alter the negotiating delegations for Geneva III and beyond. In effect, he would ask the two negotiating parties to send those who know the ground and who can take concrete steps to stop the fighting and to silence the guns.

Will Brahimi succeed? Some in Geneva have said that there is a wager between Brahimi and Syrian Foreign Minister Walid Moallem over who will exhibit more patience in the peace negotiations. It is certain that achieving real peace will require a lot more of that commodity.