The growing economic crisis in the Gaza Strip and frustration over Hamas' rule play into the hands of small jihadist terror organizations, which fire at Israel and destabilize the status quo. 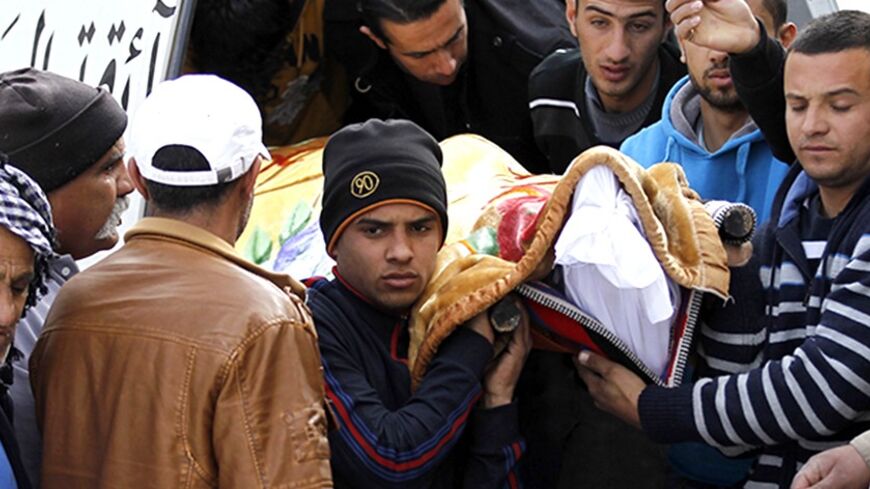 Bedouins carry the body of Salah Abu Latif during his funeral in the Bedouin town of Rahat, southern Israel, Dec. 25, 2013. - REUTERS/Baz Ratner

After months of relative quiet, the Gaza Strip is back on escalation track. Salah Abu Latif was killed two weeks ago on Dec. 24; the Rahat resident and employee of the Ministry of Defense was fixing the fence that runs along the Gaza border when he was shot and killed. Since then, the war of attrition in the region has been renewed. Armed Palestinians fire mortars and rockets at Israel, and the Israel Defense Forces (IDF) respond with aerial assaults at the sources of the attacks, or at various Hamas targets.

Last week alone, the Israeli air force attacked the Gaza Strip on seven separate occasions, wounding eight Palestinians. After one of these attacks, the IDF released a statement saying, “The Hamas terrorist organization is the right address, and it bears responsibility.” The gradual but steady escalation stands in stark contradiction to all of the assessments by key figures in Israel’s security establishment, which claims that Hamas is too weak and too isolated at this time, and will therefore do everything it can to avoid another round of military clashes with Israel.

Ever since the Muslim Brotherhood’s government was overthrown in Egypt, ever since Egyptian President Mohammed Morsi was removed from office and the Egyptian army launched a persistent struggle against Hamas along the Rafah border, the feeling in Israel has been that of gloating. The assumption was that Hamas’ leaders were both dejected and terrified by the new situation. They would therefore act tenaciously against the other armed groups in Gaza, if only to avoid getting entangled in yet another unnecessary war with Israel, which could lead to the collapse of their regime. That assessment made a lot of sense.

The Egyptian army’s war against the smuggling tunnels connecting the Gaza Strip with the Sinai Peninsula has effectively led to the closing of this subterranean “oxygen tube.” As a result, Israel is once again the sole provider of food and raw materials to the Gaza Strip. Hamas’ efforts to break free of its economic dependence on Israel have failed, leaving Israel with an effective means of pressuring the organization. As far as Israeli decision-makers are concerned, there can be no better balance of fear. If the leaders of Hamas behave themselves, maintain the calm and assume responsibility for what happens in the Gaza Strip, they will receive provisions through the border crossings. But there is a big difference between assessments and reality.

The feeling of desperation and suffocation experienced by Gaza residents seem to be stronger than any balance of fear. Ever since the collapse of the thriving smuggling enterprise in Rafah, an entire sector of businessmen and workers supported by it has also collapsed. Because of the shortage of electricity, power is rationed to the people of Gaza, with each family receiving about eight hours a day on average. Because of the constant lack of energy for heating, they barely have any hot water. Unemployment has reached record levels, too. While there are no official figures concerning the scope of unemployment in Gaza today, sources in the Gaza Strip estimate that over half of the population requires full or partial aid from the United Nations Relief and Works Agency for Palestine Refugees in the Near East (UNRWA). But these days, government officials, bureaucrats and people in uniform need financial assistance, too. Ever since Hamas lost the financial support it was receiving from Iran and Qatar, it has had a hard time paying salaries.

Desperation has become the main player in the arena, and it is now dictating the rules of the game. The Gaza Strip is a tinderbox again. As usual, most of the rage is directed against Israel. Unlike in the past, however, some of this criticism is also directed at the regime of Gen. Abdel Fattah al-Sisi in Egypt, which considers Hamas to be an enemy. In certain circles within the Gaza Strip, particularly among those who are not hard-core supporters of Hamas, there is quiet criticism of Prime Minister Ismail Haniyeh’s government. Ever since Hamas came to power eight years ago, the situation in the Gaza Strip has become intolerable. There are many who place the onus of responsibility squarely on the shoulders of the movement’s leaders.

The groups that benefit most from this situation are smaller movements, whose sources of funding are not connected to Hamas. Groups such as Islamic Jihad, the Popular Resistance Committees, the Army of Islam and cells of Ansar Bayt al-Maqdas all obtain money from Iran and from various Islamic foundations around the world. They are filling the vacuum left by Hamas among the local population, offering hope to desperate youths. They have also been waging an ongoing struggle with Hamas under the radar by promising daily employment and nice sums of cash to anyone who joins their ranks and fires a rocket or a mortar at Israel. These are young people who — in some other, less tragic, situation — would never consider joining these groups and participating in the violence. Some are even academics, who acquired their education at the Islamic University in the Gaza Strip.

As such, it turns out that Israel has no good reason to celebrate the crisis that Hamas is now facing. Sooner or later it will learn that some other player in the Gaza Strip, who has no responsibility to the local residents or to the balance of fear, will gather enough support to set the border zone on fire. Perhaps even to set the whole the region on fire.