Many Sunni Iraqis and Syrians are fighting back against the foreign fighters and extreme practices of the Islamic State of Iraq and al-Sham (ISIS). 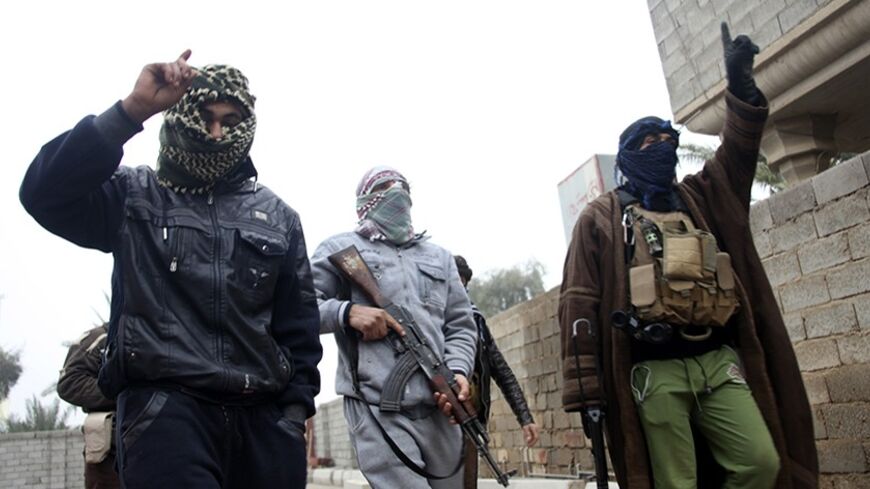 The rise of influence of the Islamic State of Iraq and al-Sham (ISIS) in the past few months was based on two main factors: First, ISIS is a transnational organization operating across borders and benefiting from its ability to maneuver, given the fact it has bases in Iraq and Syria. Second, the sectarian conflict has been gaining ground in the region, providing fertile soil for the organization to recruit and gather sympathizers.

However, recent days have shown that ISIS has started to lose its main advantage points, as it is engaged in major confrontations in Iraq and Syria at the same time.

The Iraqi government has announced a large military campaign against ISIS in the areas of western Iraq. ISIS entered into armed confrontations with Sunni tribal forces in Anbar, and has been recently facing a military campaign waged against it in Syria, by the Syrian opposition that joined its ranks against it. This means that ISIS is being fought by groups that are mostly Sunni, and many are Islamist and Salafist, which are the very same constituencies it was appealing to. In Syria, ISIS faced military setbacks in several regions — such as the Aleppo countryside and Raqqa — not to mention signs of division within its ranks when some of its members defected to join Jabhat al-Nusra, which serves as the Syrian arm of al-Qaeda.

The organization is being pressured on both sides of the Syrian-Iraqi border, so it has become unable to withdraw from one side to another until the pressure is gone. Therefore, it has lost many opportunities for strategic maneuvers, which pushed it to abandon its secretive nature and reveal its locations in several areas in Iraq. This happened when ISIS took control of several areas in Anbar, including its most populated city, Fallujah, which it declared an Islamic emirate.

This seemed to be a military setback for the Iraqi army. However, from a strategic perspective, this would not bode well for ISIS, as subsequent events in the last 24 hours have shown. Fallujah’s notables, clerics and tribal sheikhs reached an agreement with the Iraqi army to remove any armed deployment in the city and allow local police to deploy again.

While this should not be translated into a conclusion that Sunni insurgency is over or sectarian tension has disappeared, it indicates that ISIS has failed to mobilize the Sunni population behind its militant leadership. One of the organization’s strong characteristics was its “ghost-like” nature and ability to benefit from the broad discontent of Sunnis against the government of Iraq Prime Minister Nouri al-Maliki to secure safe haven.

Today, however, ISIS has started to have direct contact with the people, deploying its fighters, some of them foreign, in areas that are known to be under the control of local clans and tribes. This has swiftly led to clashes between the organization and some Sunni local forces, especially those that were part of Sawha groups formed by the US military to fight al-Qaeda. These groups fear ISIS would take actions in reprisal against them, should it manage to control the area completely. However, there is a general consensus among Sunnis on the need not to legitimize the presence of ISIS and to regard it as a great burden that will harm the cause of Sunnis in Iraq. Some have gone as far as to say that the organization is linked to an “Iranian-Syrian conspiracy” to distort the revolution against the regime of Syrian President Bashar al-Assad and the government of Maliki.

In any case, it appears that ISIS is engaging in one of its toughest battles and it would be difficult to imagine it winning, in light of the growing agreement to fight against it at the domestic, regional and international levels. Its spokesman, Abu Mohammed al-Adnani, made that clear in his statement on Jan. 7, in which he declared that the organization will wage a holy war against Syrian opposition groups whom he likened to Sahwa groups in Iraq.

The Syrian opposition took the step to establish what has become known as the Mujahedeen Army, with the Islamic factions at its core, to fight against ISIS and take it out of the areas under their influence in Syria. This is further proof that the Syrian opposition and its regional sympathizers are keen to get rid of the negative legacy resulting from the practices of this radical group, which tarnished the image of the opposition and jeopardized its negotiating stance in the Geneva II conference.

ISIS gained influence in Syria and Iraq and managed to export its practices to Lebanon due to the overlapping political struggles and the regional rivalry in the three countries. Perhaps one of the ways to undermine or eliminate this group is to start separating the ongoing struggles in these countries. This is also important to de-escalate their sectarian nature upon which ISIS has built its influence.