The Ahrar movement claims that none of the goals of Egypt’s January 25 Revolution have been achieved and vows to continue the struggle. 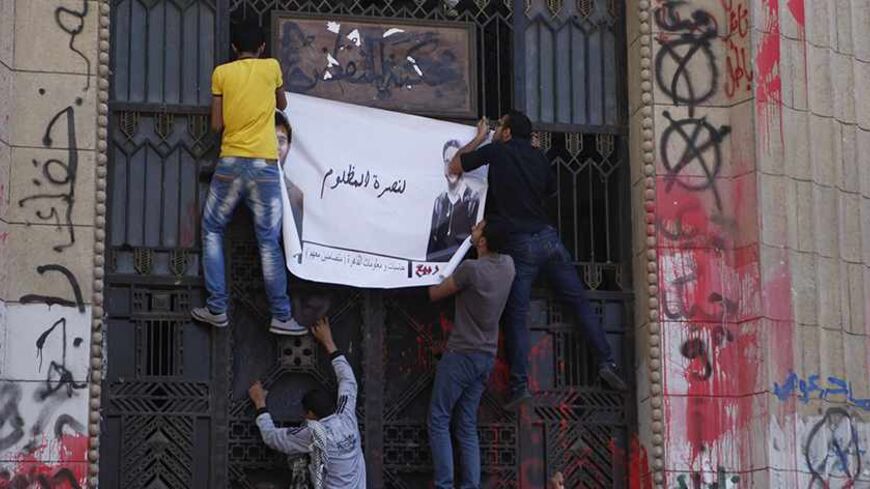 Islamist protesters and activists from the "Ahrar movement" hold a banner of detained fellow demonstrators during a protest supporting them in Cairo, April 11, 2013. - REUTERS/Amr Abdallah Dalsh

Although the Ahrar movement terrorized Egyptian security services until President Mohammed Morsi was toppled, it has been conspicuously absent from the demonstrations that followed Morsi’s ouster. During that period, the movement organized only two demonstrations, which resulted in the killing of six of its members and the arrest of dozens of influential activists. One of these, Ahmed Arafa, was recently sentenced to life in prison.

Six months after Morsi’s deposition, Ahrar members are back on the scene, vowing to overthrow the current regime and demonstrate in Tahrir Square on the upcoming anniversary of the January 25 Revolution whatever the cost, according to a recent statement by the movement.

The statement, addressed to the movement’s youth, said: “We are going down to Tahrir Square no matter what happens. Let each free person carry his soul in the palm of his hand. For any free person, death is better than submission. … We will either go back to the square or go to heaven.”

The Ahrar movement had raised the slogan “No to the military, no to the feloul [remnants of the old regime], No to the Muslim Brotherhood.” Ahrar emerged after Hazem Salah Abu Ismail was barred from running in the presidential election because his mother was a US national, which he denied. He is being tried on charges of falsifying official documents, including his mother’s nationality.

Ahrar includes in its structure the Ultras White Knights, which support the Zamalek Sporting Club. Ahrar was one of the reasons for the dismissal of former Interior Minister Ahmed Gamal El Din.

Ahrar does not seek fame and would rather stay in the shadows. Its members refrain from mentioning the movement in the media. Most members are committed to that agreement, and there is no contradiction between their opinions and attitudes. For example, a number of them encourage the sport of football by being founding members of the Ultras White Knights. The movement’s principles are “We shall live in dignity” and “Ideas do not die,” according to one member.

Ahmad Ibrahim, a first-year student in a private university and an Ahrar member, was interviewed by Al-Monitor while taking part in a demonstration in front of the main gate of Cairo University in support of student demonstrators. He said, “Some members of the movement are involved in the demonstrations and in the various private revolutionary events organized by revolutionary youth movements, like April 6 and the Way of the Revolution Front, because the Ministry of the Interior will attack us if we go out alone and face live ammunition, as happened to us in the Sphinx field on Aug. 30, when six of the movement’s members were killed. [The government] fears us more than any other revolutionary movement or faction,” he added, indicating that eight members from the movement’s leadership had been arrested.

Ibrahim said, “We are not really seeking to add many young people to the movement because we believe that quality is more important. We don’t let everyone in to avoid being infiltrated by the security services.”

About the movement’s current activities and why it disappeared from the scene and accused the Muslim Brotherhood of betraying it, he said, “The movement is hidden now because we are in the stage of raising people’s awareness and are busy with revolutionary awareness. Also, some of our leaders are very busy with forming a legal office for the movement to defend the detainees, who now number in the thousands, especially after the serious violations by the current regime.”

One of the movement’s social media activists said in a statement to Al-Monitor, “There is no coordination or relationship with the Muslim Brotherhood. I’m afraid that there is a conflict between us, and the demands are incompatible. We reject Morsi’s return.”

A number of young Muslim Brotherhood supporters have attacked Ismail and accused Ahrar of selling the Brotherhood out after the dismissal of Morsi.

An Ahrar source who declined to be named said, “Our goal is to end military rule, which we believe did not end under Morsi. [The military] was ruling under a civilian-Islamist guise, and it is now ruling under a different civilian guise. We don’t want any clashes, but demanding Morsi’s return conflicts directly with our goals and with our vision of the need to return the revolution to its first square after Feb. 11, 2011, and to correct the revolutionaries’ mistake of leaving the square as soon as [deposed President Hosni] Mubarak left power. At the same time, we reject June 30 as a popular revolution that corrected the path of the January revolution. June 30 is a day that we reject, along with its militarization, its feloul and its road map.”

Another Ahrar member who requested anonymity spoke to Al-Monitor about the rules of engagement with the police, saying, “The engagement shouldn’t continue very long. We need to move en masse after the [sit-in] is broken up. Those are two basic pillars that we rely on, whereas the basic principle in such cases is ‘Unity is strength.’”

He admitted some coordination among Ahrar, the April 6 movement and the Way of the Revolution Front for the mobilization to participate in the demonstrations on the anniversary of Jan. 25.

Ahmed Abdel al-Gawad is one of the founders of the force that recently became Tariq al-Thawra, which is composed of April 6 youth, revolutionary socialists and a number of independent activists. In an interview with Al-Monitor, he said, “The Ahrar movement is moving in the same space that we are moving in: removing the military from power. We coordinated with them at the start of the revolutionary events and activities, such as during the demonstration at Sphinx field. Then they joined us in the Mohamed Mahmoud events without them raising any flags. We refused for the Ahrar movement be with us in the Way of the Revolution Front despite [Ahrar’s] revolutionary rhetoric. We find [Ahrar] to be radical and partial to the Islamic project, and there is a difference between our discourse and theirs.”

Khaled Abdel-Hamid, the spokesperson for the Way of the Revolution Front and one of the leaders of the revolutionary socialists, said in a statement to Al-Monitor, “We will mobilize strongly to complete the revolution of Jan. 25, 2011, on its anniversary. We will raise the same slogans we raised in 2011: ‘life, freedom and social justice,’ because nothing of them was achieved. And we will continue making those demands until they are achieved.”

In contrast, the Egyptian media is waging a fierce campaign against anyone who announces their participation in the anniversary of the January 25 revolution to protest against the current regime, by claiming that it is a “Muslim Brotherhood conspiracy” to restore the rule of the former president.

For her part, May Wehbe, a member of Tamarod’s political bureau, which led the protests on June 30 and succeeded in ousting Morsi from power, told Al-Monitor, “The movement has not yet decided how it would deal with the coming anniversary of the January 25 Revolution. We will be holding a meeting to discuss the matter.”