The feeling on Cairo’s streets is that the one-year anniversary of President Mohammed Morsi’s rule will result in violent confrontations. 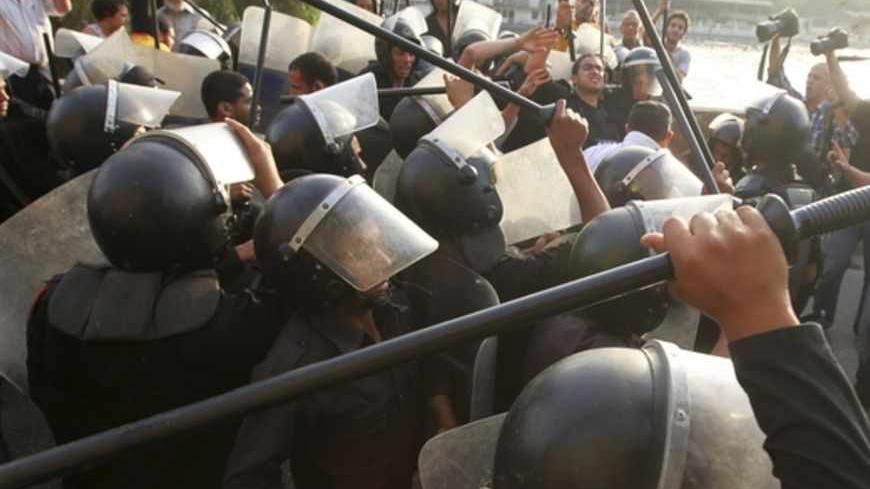 Riot police attempt to separate protesters made up of intellectuals and artists from supporters of Egyptian President Mohammed Morsi in front of the Ministry of Culture during a demonstration in Cairo, June 11, 2013. - REUTERS/Mohamed Abd El Ghany

CAIRO — Adel al-Hassan, an active member of Tamarrod, or the Rebellion Initiative — the independent movement that collected millions of signatures demanding the country’s first freely elected president to step down — was shot on Sunday, June 9. He suffered a brain hemorrhage that left him partially paralyzed.

“He is well known for his political activism and for being Tamarrod’s representative; he was targeted while calling people to stand in the face of those oppressing them,” said Mohamed Hussien, a friend of the victim who talked to Al-Monitor at the eastern Cairo public hospital where Hassan is kept under medical surveillance. Hussien stood beside Hassan when three birdshot bullets were fired at them; bullet fragments injured his right arm.

Ahmed al-Hassan, the victim’s older brother, and Ahmed Abu Ghazala, a younger member of Tamarrod who works regularly with Hassan, both confirmed that this is not the first time they were attacked by members of President Mohammed Morsi’s home organization, the Muslim Brotherhood, or its Islamist affiliates.

“Adel was definitely targeted; every eyewitness confirmed that it was not a random shooting incident. But since the attacker remains unknown, we cannot accuse anyone,” Abu Ghazala told Al-Monitor.

The attack on Hassan, an employee of the Egyptian government’s State Information Service, was the latest in a series of attacks that targeted offices and members of the independent Tamarrod, which now operates at least one hub with several members and volunteers in almost every neighborhood in Egypt.

Since Tamarrod's establishment less than two months ago, it claims to have collected more than 7 million signed petition forms, a number that exceeds the total of votes for Morsi in the first phase of the presidential elections in June 2012. Hassan is credited with collecting 15,000 signed forms since he joined the movement, and according to his brother, a few more thousand forms are still at his house in Cairo’s Imbaba district.

Tamarrod continues to focus its momentum on the massive protests it has called for on June 30.

The independent movement’s boisterous call echoed across Egypt and galvanized dozens of political parties, youth movements and even masses of apolitical citizens who signed the petition, volunteered with the initiative, donated to the campaign and pledged to be at the gates of Morsi’s eastern Cairo presidential palace that in December 2012 witnessed bloody confrontations that left at least 10 people killed.

Meanwhile, the language of Morsi’s supporters has grown more aggressive as the countdown continues. Leaders of Egypt’s Islamist currents went from mocking the petitioning opposition to accusing members of Tamarrod of faithlessness and finally threatened those considering participating in the June 30 protests.

“The communists, the atheists and the radical Copts are the main callers for protests on June 30. Remnants of the former regime are financing them and are tempting the church to mobilize its masses,” said Assem Abdel Maged, a speaker and senior officer of Egypt’s Gamaa Islamiya, which planned and executed dozens of terrorist attacks, including the 1997 Luxor massacre that killed 58 tourists.

“I tell the church not to sacrifice your children. Do they think that the Islamist public will remain silent if they answer this call and try to overthrow the president?” asked Abdel Maged, who was tried and sentenced for taking part in the assassination of Egypt’s late president Anwar Sadat, during his appearance on the Islamist cable channel Al-Nass on Saturday, June 8, a day before Adel Al-Hassan was shot.

Despite several peaceful June 30 scenarios put forward by local commentators and analysts, a large number of politicians and activists are highly concerned and anticipating bloody confrontations.

Yasser el-Hawary, a spokesman of The Free Egyptians Party and a top officer of the dissolved Revolutionary Youth Council that played a major role in the 18-day Jan. 25 demonstrations that toppled former President Hosni Mubarak, told Al-Monitor, “If the Muslim Brotherhood or their supporters meet opposition protests on June 30, there will be no other scene but deadly clashes.”

El-Hawary is not concerned about the police cracking down on protesters this time. He said, “Morsi is not Mubarak, and his relationship with the executive authorities is debilitated and deteriorates with every day that passes.”

“The Muslim Brotherhood is underestimating the day. They think it’s a small sit-in that they would overcome in minutes, which is our major concern. This day, according to our field operations, is nothing like January 25, and will be massive,” said Hawary.

“The chances of bloody confrontations are at 60% so far, and rising,” said Hawary, who believes that “Morsi should eliminate that bloody scenario by calling for a public referendum on early presidential elections. If not, he should take responsibility for bloodshed if it ensues and stand trial alongside Hosni Mubarak, who stood watching as people were killed in January 2011.”

Several of those who expect June 30 could turn into unprecedented violence also believe that the president and the Muslim Brotherhood are the main reasons behind the rising momentum.

“It’s the president’s first anniversary in power, which also marks a year of economic depression and widespread social frustration. Those ordinary citizens who don’t represent any political or religious ideology — basically, the Egyptian people — are coming down peacefully in opposition to a specific group that is not or representative of the Egyptian people,” said Khaled Abu Bakr, a prominent lawyer who represents the families of dozens of protesters who were killed or injured during the January 2011 protests.

“The Muslim Brotherhood members don’t seem to understand how frustrated people are, mainly because they are cared for by the group, which supports and works for its members, not for the Egyptian people,” added Abu Bakr, who said that all scenarios are possible on June 30, adding, “Bloody confrontations are also possible because of continuous charging of masses through an uncontrolled media.”

Many Egyptians fear that there will be clashes at protest sites June 30. But they also fear that such confrontations could have a secondary effect and grow into nationwide clashes between members, representatives and affiliates of the ruling Muslim Brotherhood and ordinary citizens across the country.

“The state of political polarization has already seeped into society, and so will violence if it takes place on June 30,” said Mostafa el-Hagary, a spokesman of the April 6 Democratic Front, an offshoot of the highly organized April 6 Revolutionary Youth that has led Egypt’s protest movement since 2008.

The incident evolved into several hours of clashes between residents of the neighborhood and Morsi’s supporters. Hagary highlighted the confrontation as an example of what could happen post-June 30.

“I will not speculate, but will continue to call for peaceful protests despite knowing that the Islamist current will not resort to peaceful measures and avoid clashes. I hope they, for once, gain some popularity by fulfilling the legitimate demands of millions of people.”

“They believe they are defending Islamic sharia and Morsi’s legitimacy, and history tells us they don’t mind violence and bloodshed defending both,” said Hagary.