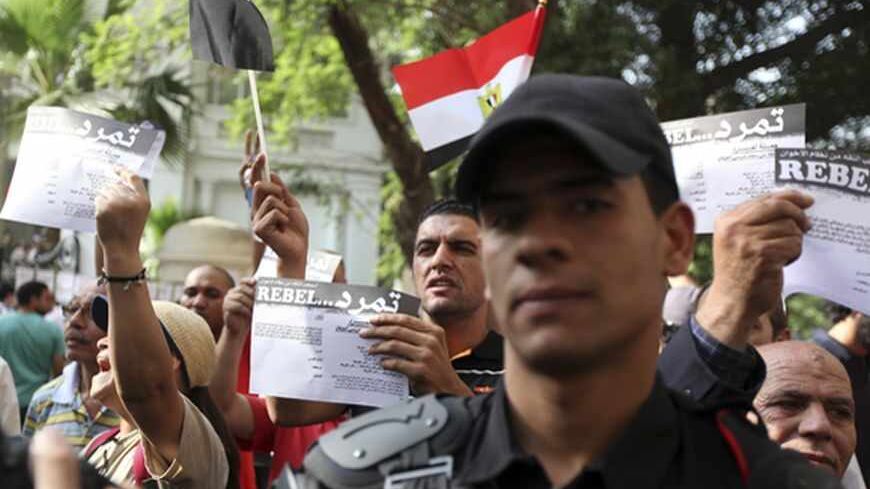 Anti-Morsi protesters, made up of intellectuals and artists, hold up signs in front of the Ministry of Culture in Cairo during a demonstration against what they claimed is increasing influence of the Muslim Brotherhood over the ministry, June 11, 2013. - REUTERS/Mohamed Abd El Ghany

CAIRO — Less than two weeks before June 30, the day of expected massive protests calling for the ouster of Egypt’s first freely elected president, Mohammed Morsi, both the Ministry of Interior and the military are left with difficult options as expectations of widespread, bloody confrontations continue to rise.

Retired police Col. Khaled Okasha, a security analyst and main witness in the trial involving Morsi’s jailbreak during the January 25 protests, believes the Ministry of Interior “is going through the most complicated, confusing and mysterious time in its recent history.”

On June 12, a day before Okasha’s talk with Al-Monitor, Egypt’s Interior Minister Gen. Mohamed Ibrahim announced that “police forces are legally committed to securing the June 30 protests, keen on the safety of every citizen regardless of their political allegiances.”

The statement contradicted the minister’s statement two days earlier [June 10]: “You will not see a single police officer in protest areas to let peaceful protesters express their opinions freely.”

The abrupt and unexplained reversal of Ibrahim’s statements clearly reflected how indecisive the country’s security apparatus is.

“We cannot understand who takes such decisions and on what basis. But the minister of interior is similar to the president who appointed him to politicize the ministry in the first place and recreate an ironfisted apparatus that will serve the administration and defend its policies and interests regardless of how right or wrong they are,” said Okasha.

He explained that the catastrophic confusion with which the police force approaches a critical day like June 30 stems from the political administration’s policies. He believes that Morsi planned to control the police force — which is still in a state of convalescence after its disintegration during the January 2011 uprising — “by appointing a weak, submissive, shortsighted minister who only obeys the administration and fails to run the department both professionally and independently.”

“The result was severe internal divisions within the ranks of the ministry and a rising hatred and animosity toward Morsi's administration, moreover, the ministry is already rejected and hated by wide sectors of the community.”

One of countless signals of the deteriorating relations between the police force and Morsi’s administration was the funeral-turned-protest of Capt. Mohamed Abu Shakra, a counterterrorism officer who was killed in North Sinai on June 9. A video circulating online showed a Central Security officer screaming at the camera, “God curse the religion of the Muslim Brotherhood,” an unforgivable insult in Egypt and the Arab and Islamic world.

Dozens of other officers and civilians who attended the funeral continued to chant what became the funeral’s mantra, “Morsi, leave.”

Meanwhile, as opposition members and independent activists expect the police to refrain from interfering as violence ensues between Morsi’s loyalist Islamists and his opposition, Okasha thinks that “it’s not that simple and their options are as complicated as their deteriorating relationship with Morsi and his administration.”

The police colonel — who served across Egypt before heading North Sinai’s Civil Defense Department until his retirement in 2012 — said that “the Ministry of Interior’s reaction will be decided by what happens on June 30.”

He detailed three scenarios the baffled department is left with.

First, the police withdraws entirely from major protest or confrontation sites even if there are orders to engage. It will be a reflection of the deep divisions between the higher ranks of the ministry and its middle and lower ranks. Police forces are keen to avoid any role in confrontations between supporters of the political administration that deeply troubles them and the opposition, who view the security authorities as the country’s oppression tool that continues to live unpunished for decades of brutality and violations.

Withdrawal of police forces and the inconsistency of orders and obeying those orders will result in bloody confrontations between Morsi's supporters and the opposition, which will subsequently force the military into the scene to fill the security vacuum caused by such police absence.

Second, if police forces professionally secure the protest sites, they will be able to control small-sized confrontations only if numbers remain in the dozens and if violence erupts in limited areas such as residential neighborhoods. Civilians in such volatile, yet small-sized spots, will help the security forces maintain order and curb any attempts to trigger further clashes or violations.

In the case of growing numbers, hundreds and above, security forces will be forced to withdraw, which is a normal situation for any police force that fails to put an end to violent clashes due to the growing momentum, and it will once again call for military intervention.

Third, the worst case and most dangerous scenario will be confrontations between police forces and an opposition or a pro-Morsi front. This scenario will only apply in case of attacks on the police forces themselves and state or privately owned facilities. Such clashes will be perceived and misinterpreted as police forces are either supporting or attacking Morsi’s government, and as security personnel cannot abandon their duties of securing such spots, clashes will continue and escalate.

This will only happen if peaceful protesters, government officials and opposition leaders fail to control others who adopt violent means and immediately resort to violence at the sight of anything representative of the government such as police forces.

“On the bright side,” Okasha said, “the military is committed to controlling any acts of violence, and it has announced that it will not allow any violation against civilians. The military command’s message was loud and clear to both the opposition and President Morsi's loyalists.”

The real challenge facing the military is the spread of clashes from protest sites to ordinary citizens in residential neighborhoods across Egypt.

“This is all a result of the state of polarization and dividing the community, a policy led by President Morsi, his government and the Muslim Brotherhood. Ordinary citizens were turned from political competitors to enemies,” Okasha said.

Okasha speculates that the military will not be able to control such contagious societal violence especially if the police department is inactive.

“A political message from the military command will mobilize the public to support it in maintaining order and controlling such a crisis,” Okasha said. It will be a reminder of the military’s critical intervention on Jan. 28, 2011, days before former President Hosni Mubarak’s ouster.

Meanwhile, signs of societal violence have already appeared. On June 12, Bakkos and Welad Abu Ismail, two of Alexandria’s most crowded districts, witnessed hours of violent clashes between Islamist Morsi supporters and members of the petitioning Tamarrud Initiative [Rebellion Initiative], along with other opposition members and ordinary residents of the neighborhoods.

Okasha agreed that in case of military intervention, it might be the end to a phase of bloody clashes but it will definitely be the begging of political repercussions that are being speculated as much as the scenarios of June 30.