The elimination by airstrike of Islamic Jihad operative Ahmad Saad on Jan. 19 raises again the discussion on the long-term effectiveness of Israel's targeted killings policy. 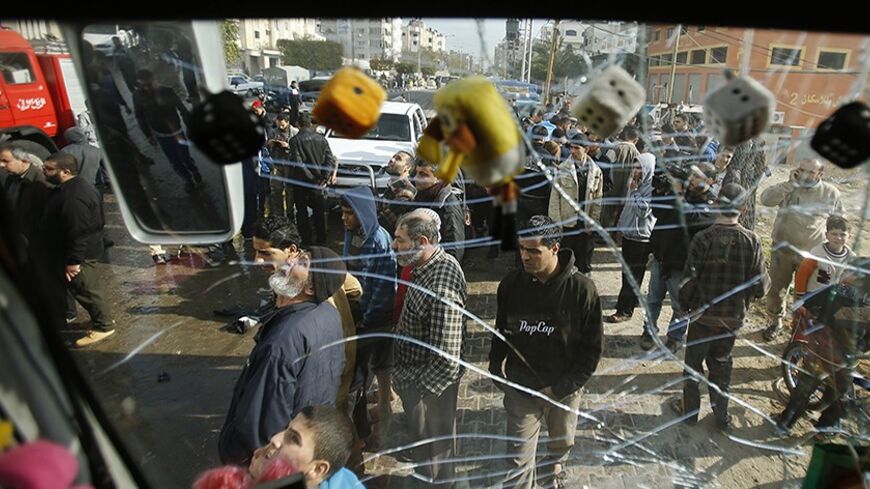 Palestinians are pictured through the damaged windshield of a bus as they gather at the scene of an Israeli airstrike, which hit a motorcycle, in the northern Gaza Strip, Jan. 19, 2014. - REUTERS/Mohammed Salem

On Jan. 19, the Israel Defense Forces (IDF) killed Ahmad Saad, an Islamic Jihad operative, in an airstrike on the Gaza Strip. In a statement released after the attack, the IDF claimed that Saad was directly responsible for last week’s rocket fire targeting the southern Israeli city of Ashkelon, and that he also participated in the firing of rockets at Israel during Operation Pillar of Defense in November 2012. The statement read: “The IDF operated to eliminate an imminent threat to the lives of Israeli civilians." Ever since Operation Pillar of Defense and the understandings with Hamas — mediated by Egypt — which led to a cease-fire, aerial eliminations have been a relatively rare occurrence. Three active terrorists were killed in such attacks after the attempt to fire rockets at Israel.

Very few Israelis are aware of the fact that at the start of the second intifada the defense establishment was given a limited and conditional approval to what the media called “eliminations” and what the IDF termed “targeted [preventive] killings.” Elyakim Rubinstein, who was state attorney general at the time, only allowed these operations to take place as a last resort, after it was definitively proven that the person targeted was a “ticking time bomb,” and on condition that there was no doubt that he was on his way to launch a terrorist attack and there was no other way to stop him. Then and only then was it permissible to launch the “elimination,” the term that most of the Israeli media used for such operations.

It was Rubinstein who claimed in 2001 that the term “elimination” does an injustice to Israel, and that they should be called “targeted killings.” In a lecture he delivered in 2001, he said, “In the absence of any other option, and on the basis of reliable information that certain ongoing activities almost certainly pose a threat, and given the responsibility to defend the citizens of the country, there are instances in which it is necessary to prevent attacks by attacking the enemy, with the mandatory prerequisite that such attacks follow all the legal guidelines of the military advocate-general’s office. Targeted killings should not be used as a means of exacting vengeance for a terrorist attack that has already taken place, but only as a necessary action intended to prevent the next attack.”

At the time, the military advocate-general released similar guidelines. Over the years, however, the IDF had difficulty finding other effective means of preventing terrorist and rocket attacks into Israel, so the guidelines were gradually relaxed. Eliminations became the defense establishment’s primary response, and in some cases they were not only intended to prevent attacks against Israel but they were also used to settle accounts and exact punishment for attacks that had already happened or as a more general pre-emptive measure against future attacks.

Its climax came during the second intifada. Targeted killings — which were not always “targeted” and sometimes caused large-scale damage and loss of life — may have prevented attacks in the short term, but their frequent use only increased the motivation to launch terrorist attacks against Israel. The routine of eliminations, which became the IDF’s main operational tool in the occupied territories, actually united the Palestinian population in the Gaza Strip and the West Bank. In the occupied territories, terrorist attacks were perceived by the public to be a necessary response to eliminations by Israel.

Terrorist organizations had an easy time finding replacements for activists who were killed. According to Hamas, Islamic Jihad and other Gaza-based groups, after every elimination huge numbers of new recruits seeking vengeance lined up to join. A Palestinian boy was hurt during the attack that killed Saad on Jan. 19, and rage against Israel intensified in the Palestinian street.

Over the past few years, the IDF opened up to the media about some of the methods and means of attack that it employs in the area. Cameras hover above the Gaza Strip, transmitting live aerial images of an extensive stretch of territory defined as the rocket-launching area from where Israel is attacked. Specially trained soldiers sit in a control center lined with monitors, watching the transmissions and trying to locate terrorists attempting to fire rockets at Israel’s southern settlements.

In the event that the IDF identifies preparations to fire a rocket, it has no choice but to prevent it from the air. However, when eliminations become the first solution to the problem, and their use becomes both intensive and routine, the descent down the slippery slope is both smooth and quick. Israel’s light finger on the trigger during the second intifada not only failed to stop terrorist attacks against Israel but also fed terrorism and ignited it once more.

Today, Israel’s defense establishment is facing a new challenge in the Gaza Strip. Hamas’ status is deteriorating, the Palestinian street is applying enormous pressure on the movement and its leaders are fighting to maintain their rule. Other groups such as Islamic Jihad and the Popular Resistance Committees are exploiting this weakness to launch rocket attacks against Israel. In this case, too, using weapons of elimination on a daily basis could prove to be a double-edged sword, adding fuel to the fire and encouraging even more terrorist attacks against Israel.

Israel must act wisely and not switch back to an impulsive policy of aerial eliminations. Israel has an interest in keeping the Hamas regime in place, because the alternatives could well be worse, and Israel has no interest right now in a large-scale operation in the Gaza Strip. Given the current international situation, with boycotts against Israel pouring in from every imaginable direction, the last thing that Prime Minister Benjamin Netanyahu wants is pictures of Palestinian civilians in the Gaza Strip harmed by Israeli air force jets or ground attacks. In its current situation, while Hamas has not yet decided whether it wants to escalate affairs, a renewed Israeli policy of eliminations could certainly propel the movement to increase the level of violence.

Over the last few years, but especially since Israel and Hamas negotiated the release of kidnapped Israeli soldier Gilad Shalit in October 2011, both public and secret channels of communication have been opened between the two sides. Instead of slipping into another round of conflict, the parties should use those channels to prevent the next military operation and reach understandings that will put an end to the rocket fire targeting Israel.