Israel doesn’t understand the depth of the problem but, as Shlomi Eldar determines, the issue of Palestinian prisoners in Israel is the Achilles heel of any peace agreement and could set the region on fire again. 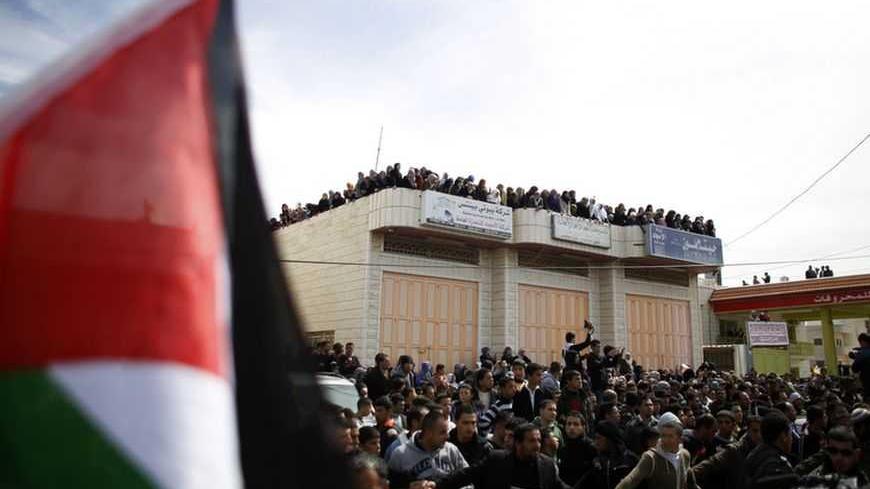 Palestinians attend the funeral of Arafat Jaradath in the West Bank village of Se'eer, near Hebron, Feb. 25, 2013. Jaradath died in jail one week after his arrest for throwing stones at Israeli cars in the West Bank. - REUTERS/Ammar Awad

It was only after the death of Palestinian prisoner Arafat Jaradath, the violent demonstrations that erupted in its wake, and the fear that this could be the spark that ignites a Third Intifada that the Israeli media decided to expand its coverage of hunger strikes under way in Israeli prisons. Very few people in Israel, including senior figures in the political and security establishments, were even aware of the importance that Palestinians place on this issue. They did not know that as far as Palestinians are concerned, this constitutes the Achilles heel of any future peace agreement. But it has always been that way, and it will always be that way too.

The Palestinians’ deep sense of frustration began to intensify immediately after the signing of the Oslo Accord. Palestinians were convinced that all of the prisoners, whom they consider prisoners of war, would be released once the agreement was signed. Consider the following: Until the signing of the Oslo Accords at the White House on Sept. 13, 1993, there was hardly a single Palestinian boy in the territories above the age of 8 who had not spent at least some time in detention or in an Israeli prison. The Intifada was raging, and every Palestinian youth believed that participating in the uprising was both a personal and a national obligation, especially in an environment where failing to participate would raise suspicions of being a collaborator.

After the signing of the Oslo Accords, there was real hope that all the prisoners would return home, and the two peoples would turn the page in their relationship. This didn’t happen, of course. Israel may have freed thousands of prisoners, who committed to signing a declaration that they would no longer participate in terrorism, but many thousands of others, such as those who were not members of the PLO or people who received lengthy sentences, were left behind in prison.

From an Israeli perspective, Palestinians imprisoned in Israel are “terrorists.” In contrast, the Palestinians, without exception, regard them as freedom fighters and see their struggle as an armed war of liberation against the Occupation. Among the many mistakes in the Oslo Accords, which made their implementation nearly impossible, the issue of Palestinian prisoners is especially prominent. It was, without a doubt, one of the main reasons why Palestinians grew disappointed with the “fruits of peace,” gave up on the agreement and no longer believed in the new era that their leaders promised them from the White House lawn.

The man who first organized the prisoners in Israeli prisons was Abu Ali Shaheen of Fatah. Shaheen first arrived in the Territories with the late Palestinian leader Yasser Arafat in 1967 to organize Fatah cells in the newly occupied West Bank and Gaza for the armed struggle that the PLO was planning. He was arrested that September, just two months after his arrival, on the Jerusalem-Tel Aviv highway while making his way from Hebron to the Gaza Strip. Sentenced to sixteen years in prison, he became the first Palestinian prisoner to receive a lengthy sentence.

He told me once in an interview: “I looked around the huge hangar where we were housed and saw who the other Palestinian prisoners were. ‘How would we ever win with them?' I wondered. ‘They’re a bunch of ignorant illiterates.’ That was when I decided to start organizing them for the future.”

Believing that the most potent weapon of all was, “Know thine enemy,” Abu Ali Shaheen arranged Hebrew-language classes for the prisoners. At the same time, he also started organizing the prisoners into a single body with an elected leadership selected by the prisoners themselves. Since then, he is considered as ''the father of all Palestinian prisoners''. He was also the one who initiated hunger strikes in an effort to improve imprisonment conditions.

It is worth knowing that in the security wing of every prison in Israel, each organization — Fatah, Hamas, and Islamic Jihad — has its own democratically elected leadership. A vote is held every six months or so, and the elected representatives are tasked with handling all issues relating to the prisoners. Interestingly, the prison authorities recognize the status of these prisoners and conduct an on-going dialogue with them on a day-to-day basis, in which each side tries to redefine its boundaries and limitations. Inevitably, the leader of the prisoners tries to “provide the goods” for the prisoners who elected him, and in so doing, to bolster his status. Meanwhile, the prison administration gets the one thing it wants: quiet.

That’s how it works. That’s how it always worked. That’s how everyone wants it to work. Most Palestinian prisoners sentenced by Israeli courts have entered the routine of prison life, assumed their places in the hierarchy that was created between the prison walls ever since the days of Abu Ali Shaheen, and hoped that one day they would be released as part of a diplomatic agreement, or at least as part of a prisoners exchange.

They key words are balance and routine, and in fact, both had been achieved. The problem is that this balance was interrupted a few years ago, so that prison unrest has now become an almost daily occurrence. What brought this about? There is one simple answer: the problem of the administrative detainees. In March 2007, the Law regarding Administrative Detainees was amended to state:

“Should the IDF commander in the region have reasonable grounds to assume that the overall security of the region or public safety requires that some individual be held in detention, the commander is permitted, upon signing a warrant, to order that the person be detained for a period not to exceed six months. Nevertheless, it is permissible to extend the period of detention by another period of six months and another period after that, at the commander’s discretion.”

It was only after Khader Adnan’s hunger strike last year that the number of administrative detainees dropped from 300 or more to about 170. Now that the territories are in turmoil again, and preparations are getting underway for a Third Intifada, the IDF and the security establishment must choose one of two approaches. According to the first approach, the administrative detention of activists marked by the Shin Bet as “instigators” is vital; their arrest will help to restore order and eliminate the threat of a new Intifada. The second approach is that the widespread use of administrative detention will only add fuel to the fire, when the territories are heating up anyway.

Based on “Israel’s security approach” over the years, it is reasonable to assume that the first option will be selected. If, however, anyone tries to learn from past experience, to go back to when everything started to heat up, and to understand how a single hunger strike could be critical and even disastrous, it is well worth taking the second option seriously. It is quite reasonable to assume that the conclusion will be that administrative detention is necessary in wartime situations, but even then it should only be used in the event of what is defined as a “ticking time bomb” (preventing a terrorist attack, etc.).

With a finger tripping too lightly across the trigger that is administrative detention, the powder keg that is the territories could very well explode.