Tens of Thousands of Palestinians Celebrate Christmas in Israel

For the second time in four months, the IDF opened the crossing points, allowing thousands of Palestinians from the West Bank to visit Israel, a rare opportunity to cross the physical and psychological fence separating both people, writes Shlomi Eldar. 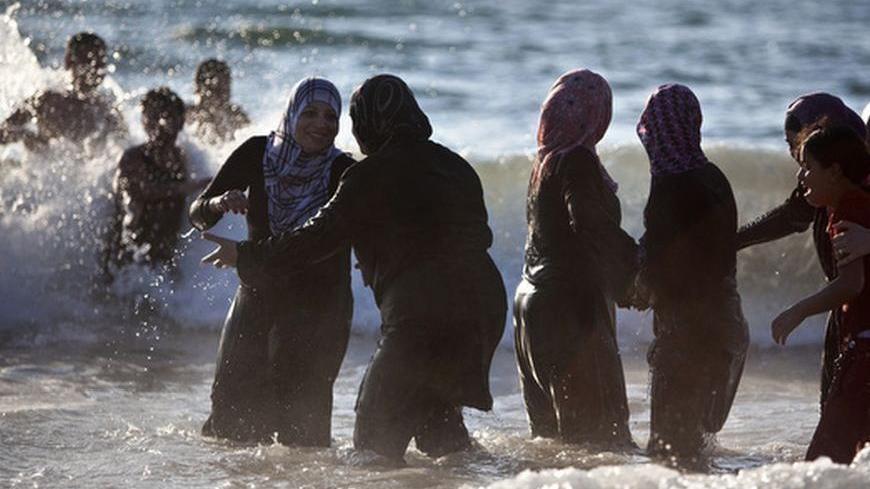 Palestinian women enjoy themselves at a beach in Tel Aviv during Eid al-Fitr, which marks the end of the holy month of Ramadan, Aug. 20, 2012. - REUTERS/Nir Elias

The terse statement released by the IDF spokesman received no special attention in the Israeli press. “The IDF Spokesperson and the Coordinator of Government Activities in the Territories announce that during the Christmas holidays, steps will be taken to build trust among the Christian Palestinian population in Judea, Samaria, and the Gaza Strip.”

Ostensibly, this was just another stale announcement, delivered in typical military jargon. We’ve become used to those steps “taken to build trust,” which really amount to little more than a reduction of the number of checkpoints in the Territories, a decision to issue more work permits, etc. This time, however, the announcement represented something far more significant. As part of this easing of restrictions, no fewer than 20,000 entry permits were given to Palestinians in the West Bank, and another 500 will be granted to residents of the Gaza Strip. In addition there will also be permits for organized groups of Palestinians who wish to tour Israel.

Think about it. Just one month after Operation “Pillar of Defense” in the Gaza Strip, with warnings of a Third Intifada reverberating everywhere as an expression of the rage felt throughout the cities and towns of the West Bank, tens of thousands of Palestinians will be spending the Christmas holiday in Israel. It was a holiday surprise by the IDF, intended “to build trust” between the two peoples.

But this isn’t the first time that something like this happened. During Eid al-Adha (the Muslim Feast of the Sacrifice) four months ago, the Civil Administration in Judea and Samaria issued permits to no fewer than 200,000 Palestinians to celebrate that holiday in Israel. By the way, it’s probably worth noting that in that particular instance, the IDF spokesman never issued a statement to the Israeli media. The permits were distributed in secret, and the event had all the trappings of a full-fledged military campaign. After all, it isn’t easy to move 200,000 Palestinians through the crossings and into Israel’s major population centers. Nor does this even take into consideration how Israeli public opinion might stymie the entire operation, forcing those Palestinians — for most of whom this was the first time that they ever visited Israel — to remain at home.

Secrecy was maintained, so that one day the citizens of Israel woke up and thought that they were still dreaming. It seemed like a hallucination, at least in the current political climate. Thousands of families from Ramallah, Nablus, Jenin, and the other cities of the West Bank had filled just about every stretch of grass in Israel’s gardens and parks. They barbecued, took a dip in the sea, and most of all, they enjoyed life — it was a real Mideast fantasy. By then, of course, it was too late to hide the story. Pictures of the mass picnic that they held had already flooded the front pages of the country’s newspapers.

Of all the many images, one stuck out above all the others as a symbol that the country’s security apparatus had undergone a change of heart. More than anything it gave at least a modest degree of hope for the region’s future. The photography shows a major Palestinian celebration, which took place on Friday evening, on the Muslim Feast of the Sacrifice, in Charles Clore Park in Tel Aviv. It happened at the very site where terrorists launched an attack on the Dolphinarium on June 1, 2001. That attack resulted in 21 fatalities, most of them young men and women, who also came to the park to celebrate, at a dance club on the Tel Aviv beach. It also happened on a Friday night.

It was one of the bloodiest suicide attacks of the Second Intifada, and it sent shock waves throughout the Israeli public. At the time, Yasser Arafat was Chairman of the Palestinian Authority. At first he refused to denounce the attack, and it took extraordinary diplomatic pressure (some might say bordering on threats) from France, Britain, and Germany before he finally issued a kind of tepid condemnation.

Regardless of Arafat’s response, for anyone looking for the breaking point in the Second Intifada — the point-of-no-return, so to speak, in Palestinian-Israeli relations — the attack on the Dolphinarium is undoubtedly a leading candidate. It played a decisive role in determining Israeli public opinion toward the Palestinians in general and the peace process in particular. From that point onward, most of the Israeli public concluded that the Oslo Accords had finally collapsed and that they were beyond resuscitation. It was an opinion that traversed the traditional boundaries between right and left.

The Israeli public demanded a response, vengeance, and security, in that particular order. The response was immediate. Prime Minister Ariel Sharon, Foreign Minister Shimon Peres and Defense Minister Binjamin Ben Eliezer met in chambers to make their decision. They imposed a complete closure on the Palestinian Authority and ordered all Palestinians in Israel (including those who were there legally) to leave at once and return to their homes. This decision eventually became Israel’s official policy. Revenge was not long in coming either, in the form of military actions deep in the West Bank. Then it was time for security measures. Using the most expansive definition of the term, Israel adopted a policy of physical separation — the Separation Fence.

More than a decade had passed since then. Israelis and Palestinians got on with their lives, but now they had a barrier of steel and cement separating between them. Over time, this fence evolved into a psychological barrier, which, it was soon discovered, was sealed even more hermetically. This psychological barrier turned out to be even more impenetrable than the physical fence running along Israel’s border with the West Bank.

Thus began the heyday of incitement and demonization — on both sides of the divide. An entire generation of Palestinians and Israelis was raised on one single image of its neighbors. With no opportunity to really get to know each other on a one-to-one basis, everything they knew about their neighbors was derived from the media and speeches by their leaders. Today there is a whole new generation in Gaza that has never met an Israeli civilian. There are children in Gaza who are convinced that all Israelis wear uniforms and that they all fly F-16s, or at the very least, that they all have an Apache helicopter parked alongside their black sedans.

It goes both ways too. Many people in Israel are convinced that the people of Gaza all live by the sword, and do little more than fire Qassam rockets at Israel, because all they really want is to throw us into the sea. Israeli society lurched to the right, while Palestinian society lost any hope it may have had that one day, someday, there will be peace between the two peoples.

And so it continued for over a decade. Throughout that time, the process of demonization only intensified, until it became a decisive factor in the war between Israelis and Palestinians.

Then, out of nowhere, a near miracle happened. The Separation Fence came tumbling down, if only for a few days, and the two sides in this conflict finally had a chance to see each other, to get to know each other, to talk to each other. This rare opportunity would not be limited to the negotiating table either. It would take place in gardens and parks and even at the beach — and it would take place under the IDF’s patronage.

The terse statement by the IDF spokesman may be just one small step forward, intended, as he put it, to “build trust,” but it is still a huge step forward toward peace.