Israeli Security Fence Architect: Why The Barrier Had to Be Built

Much like the Israeli-Palestinian conflict, the story of the security fence between Israel and the West Bank consists of two different narratives, each claiming to be the more accurate, writes Col. (Res.) Dr. Danny Tirza.  As head of the military body in charge of planning its route, he says the battle against terror may be won, but the war over public opinion is lost. 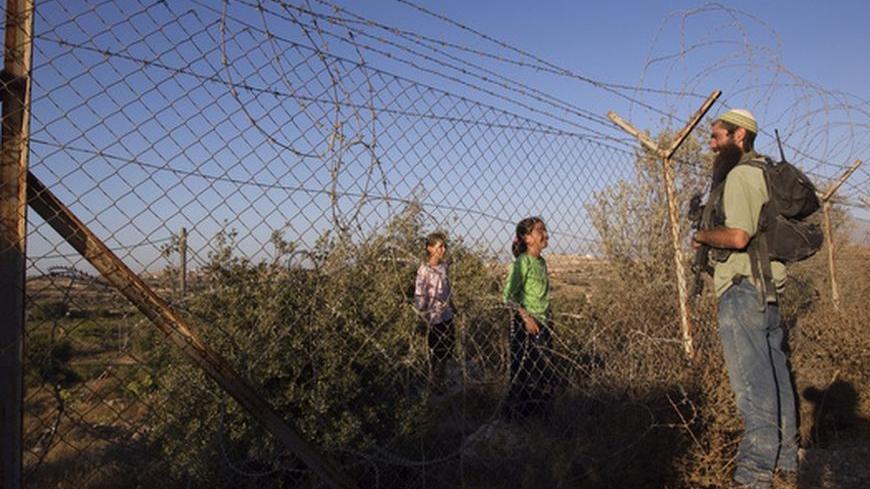 A Jewish settler participating in a drill held by the settler's security response teams, speaks to girls through a fence in the West Bank settlement. - REUTERS/Ronen Zvulun
July 1, 2012

Much like the Israeli-Palestinian conflict, the story of the security fence between Israel and the West Bank consists of two different narratives, each claiming to be the ultimate, truthful account. As head of the military body in charge of planning its route, and a member of negotiation teams with the Palestinians over the past two decades, I have come to see the situation in a more nuanced light.

The Palestinian terror onslaught that began in September 2000, and raged on until 2006, has been obliterated from our collective memory all too readily. We have unwittingly adopted its Palestinian name, the Second Intifada, thus actually accepting the view that confirms Palestinian valor in steadfast resistance, and legitimate opposition, to an Israeli occupation.

Palestinian ingenuity in maneuvering public opinion has even succeeded in stirring sympathy for the cause among large parts of the Israeli public. Indeed, the Palestinian public opinion campaign has caused many Israelis to forget that it was the Palestinians who instigated the bloody confrontation when they tried to compensate for political gains denied them at the Camp David Summit in 2000 through terror. It was not Hamas that launched the murderous attacks on Israeli citizens, but rather the Tanzim, the militant wing of the Fatah, which was led by Marwan Barghouti, under the direct command of the "Rais" — President of the Palestinian National Authority, Yasser Arafat.

Former Israeli governments, under the leadership of both Ehud Barak and Ariel Sharon, were against the construction of a security fence for internal political considerations. The decision to build the first part of the security fence was made in June 2002, following a horribly bloody March, when 139 Israeli citizens were murdered in terror attacks.

While the Israeli governments saw the security fence as no more than a physical, temporary barrier designed to block Palestinian terror, the Palestinians managed to maneuver the public into believing it was a unilateral Israeli move to delineate permanent borderlines and gain hold of Palestinian lands. The confrontation between the sides evolved into an asymmetric war: Whereas the Palestinians targeted Israeli civilians, every effort was made by the Israel Defense Forces (IDF) not to harm innocent Palestinian civilians while carrying on the struggle against Palestinian terror. The security fence, constructed with the sole purpose of defending the citizens of Israel, has since become the focus of anti-Israeli criticism worldwide.

Today, a decade after the construction of the security fence, we can look back and examine the decision in light of the outcome.

The security point of view

The drastic reduction in the number and severity of terror attacks, and the calm, the sense of security restored within Israel, cannot be attributed solely to the fence. It is merely the visible barrier perceived as a means of separation. The security goal, in fact, has been achieved through the combined efforts of all the parties concerned, including the IDF, intensive military activity, quality intelligence-gathering and security coordination with the Palestinian police. Bottom line: Israel has won the war against Palestinian terror, while Palestinians failed to achieve their political objectives through terror.

The political point of view

Israel has, to a large extent, succeeded in establishing the concept of separation. More than just serving as a barrier that blocks passes to Israel, the fence carves out an area, which enables the two sides to lead their lives separately. This concept has paved the way to broad national agreement on the solution of two states for two peoples.

The international point of view

The fence has been a major factor leading to the de-legitimization of Israel in the world. The Palestinians took advantage of its construction to promote their propaganda and present an exaggerated, distorted picture of the injustice supposedly done them.

Israel had no choice

Following the Camp David failure, and given the murderous Palestinian terror that disrupted daily life, Israel had no choice but to build the security fence. The decision on the fence’s construction was made in conjunction with two other measures in 2002. First, the Defensive Shield Operation aimed to damage and destroy terror infrastructures in the West Bank areas under Palestinian control. Second, a proposed Mideast conference was designed to open a political horizon and chart the region's political direction.

The political horizon initiative was launched in an attempt to show Palestinians that there was another way to settle the conflict. However, the Palestinians managed to avoid a political solution to the conflict again. The security fence was an essential defensive move taken by the Israeli government in order to protect its citizens.

While there is broad public consensus in Israel about the need to construct a security fence, many dispute the route. The Israeli government did not wish to unilaterally delineate a political border. Negotiations with the Palestinians were always on the horizon; however, the closer you get to the horizon, the further away it moves from you. Since Israel has declared that the fence is only a security line and is not a political borderline, a position with which the Palestinians agree, then clearly, the route of the fence will be changed in the framework of a peace agreement. We’ve seen this in action when lines were redrawn with Egypt, Jordan and Lebanon.

The Israeli Supreme Court tried to strike a balance between Israel's security needs and Palestinians' rights when it originally formulated the route. The Israeli security establishment has since changed the route to minimize damage to the Palestinians, at the expense of legitimate security considerations. I have no doubt that had these checks and balances been in place in 2002, we would have avoided some of the mistakes made.

On this front, the State of Israel could, and should, have done much more. The Palestinians managed to present the security fence as a wall to the world, although less than 5% percent of the project is a concrete wall. Along the rest of the route, it is a wire fence. What's more, the Palestinians claim that Israel seeks to annex 40% of the West Bank area through the fence. Obviously, this claim is false. The fence does not change the status of the land nor is it used to annex any territory to Israel. Less than 8% of the West Bank remained on the Israeli side. The Palestinians also claim that 400,000 Palestinians are inevitably going to be left on the Israeli side. Clearly, this claim, too, is a blatant lie. The fact is that less than 1,500 inhabitants carrying Palestinian identity cards are living on the Israeli side of the fence, apart from the East Jerusalem Palestinians, who have the status of permanent residents in Israel.

The Palestinians depict, in vivid colors, the alleged looting of lands by Israel. However, in their international public relation campaigns they have made no mention of Israel’s humanitarian solutions, which included bypass roads and passageways to enable free movement for the Palestinian population or by opening dozens of passageways to allow the local Palestinian peasants to reach their agricultural plots on the Israeli side of the fence. As far as public opinion and awareness are concerned, Israel has failed to get its message across about its security rationale and the numerous attempts to minimize any disruptions to the daily lives of Palestinians.

"Good fences make good neighbors," the American poet Robert Frost wrote in his poem “Mending Wall.” However, having served as the IDF's chief architect for the security fence, I must demur. The fence has created a conceptual and physical barrier between two neighboring peoples who have been entangled in conflict for a century but still hope to live in peace. I would have gladly done without the fence. Yet, we had no choice but to build it in order to protect our lives and our children's lives. And I do hope that the day will come when the threat of terror will no longer cast its dark shadow over our lives and we will be able to live peacefully, safely and securely, with our Palestinian neighbors, the day when there will be no need for any fences or walls.

Col. (Res.) Dr. Dany Tirza was, from 1994 to 2007, in charge of regional strategic planning and the formulation of Israel's security positions in negotiations with the Palestinians in the IDF Central Command, and served as the IDF's chief architect for the Security Fence.