The initiative of allowing hundreds of thousands of Palestinians from the West Bank to visit Israel’s parks and beaches this month is intended to foster a sense of coexistence and to send a message to the isolated Palestinians of the Gaza Strip. 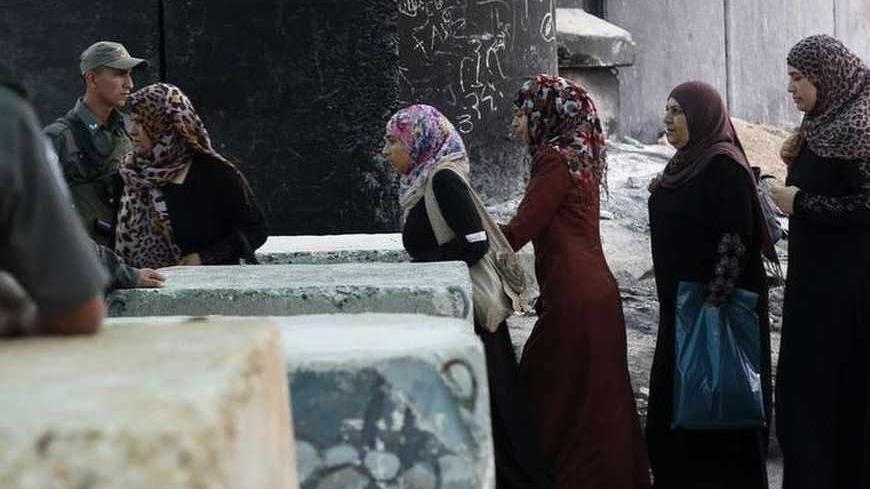 Palestinian women walk past Israeli border policemen as they cross at Qalandiya checkpoint outside the West Bank city of Ramallah, on the first Friday of the holy month of Ramadan, July 12, 2013. - REUTERS/Mohamad Torokman

The staff of Israel’s Civil Administration in Judea and Samaria is unusually busy this month. To mark Ramadan and especially Eid al-Fitr, the festival that marks the end of the fast, they are issuing hundreds of thousands of permits to Palestinians from the West Bank who want to visit Israel and vacation there. Palestinian border crossings in every zone are opened to just about anyone who submits a formal request and passes Israel’s security inspection. Buses full of tourists leave the cities of the West Bank every morning and drive straight to Israel’s vacation sites or to relatives living in the country’s Arab towns.

This policy of opening border crossings during holidays was first initiated and implemented a year ago by the chief of the Central Command, Maj. Gen. Nitzan Alon. Back then Alon claimed, and rightfully so, that given the decline in violence and the positive general atmosphere in the territories, there were no grounds to prevent tens of thousands of families from the West Bank from visiting Israel for reasons of security. On the contrary, Alon believed that these holiday outings would offer the people of the West Bank a new perspective on Israeli society, and that the encounter with Israelis could be a significant step toward re-establishing trust between the two peoples.

The first time that the Palestinian masses were allowed to enter Israel and fill its beaches and lush parks, especially in the Tel Aviv region, was a rather surreptitious affair. No advance notice was given to the Israeli media so that right-wing groups such as the leaders of the settlers or the Judea and Samaria Council, who are already at odds with Alon over his pragmatic positions, would cause the program to fail.

During the many years he served in a number of senior positions in the occupied territories, even Alon’s most inconsequential statements praising the Palestinian leadership or the level of cooperation with Palestinian security forces earned him sharp criticism from his opponents and calls to remove him from his post. The same was true of any decision he made to make life easier for the Palestinian public. While he served as commander of the Judea and Samaria Division of the IDF, settlers even stoned his vehicle and beat it with sticks, and attacks against him and his family had become a matter of routine. At one point, former Defense Minister Ehud Barak was even forced to ask the attorney general to find a legal means to put an end to right-wing incitement against Alon and his wife, who is active in the left-wing Checkpoint Watch group.

The right raged against the general again this month, following a briefing he gave to foreign ambassadors while John Kerry was visiting the region. Alon told the ambassadors that the American efforts to achieve peace are helping to pacify the region, and warned, ''If, in a few weeks, the attempt of the American involvement will go (away) with nothing, I'm afraid that we will see this trend of escalation even strengthening.''

That was more than enough cause for Knesset members from the right, headed by the Coalition Chairman Yariv Levin, to launch a strident attack against him. “No general serving in the IDF should deal with political issues. Generals serving in the IDF should deal with security issues, and it behooves the chief of staff to speak to Gen. Alon and ensure that this is what he is doing,” said Levin. Others have advised Alon to retire from the army and join the Foreign Ministry. Settlers have told the media that Alon is “disconnected from reality.”

Yet despite all that, Alon stood his ground. This month’s opening of the border crossings will once again offer hundreds of thousands of Palestinians a chance to visit their Israeli neighbors and to get a taste of coexistence, if only for a short time. At the same time, this policy also sends a message to the residents of the Gaza Strip. They may still be groaning under the burden of the Israeli siege, the rule of Hamas, and the chaos in Egypt, but they can also see their fellow Palestinians from the West Bank spending a leisurely day on Israel’s beaches.

The pressure on the Gaza Strip is particularly acute this year. Ever since the coup in Cairo, the Egyptian army has demolished most of the smuggling tunnels that provided Gazans with the bulk of raw materials they needed. Their subterranean smuggling industry, the largest in the Middle East, and according to some, in the world, has come to an abrupt halt. Meanwhile, tensions along the border with Egypt have intensified. Just last week on July 12, two Egyptian military helicopters penetrated Gaza’s airspace while pursuing a terrorist cell. It was the first time that this happened, but apparently it won’t be the last.

During this month of Ramadan, the people of the Gaza Strip can feel the vast divergence between the quality of life enjoyed by the people of the West Bank and the unbearable misery they face in Gaza, which remains sequestered and suffocating. In Gaza today there is almost no gas to fill people’s cars, the electricity is cut off for hours on end during the course of the day, and the cost of food has gone up steeply as a result of the Egyptian military operation.

Will the people of Gaza, who can turn one way and see the revolution in Egypt, then turn the other way and see the benefits enjoyed by their fellow Palestinians in the West Bank, demand that the Hamas leadership improve their quality of life? Will the Palestinian protest movement “revolt,” expand, and have an impact? That is highly doubtful. In the past, the belligerent Hamas regime had no qualms about killing anyone who organized against it, and it is safe to assume that it will have no qualms about doing so in the future, either. Furthermore, unlike the young people of Egypt, Palestinian youth, especially in Gaza, generally tend to regard their situation as the result of some divine decree or to cast blame on just one cause: the state of Israel.