Israeli plans to demolish the Palestinian village of Susiya and other similar acts will not generate support for the government's campaign to stanch the growing movement to boycott settlement products and in some cases products made in Israel. 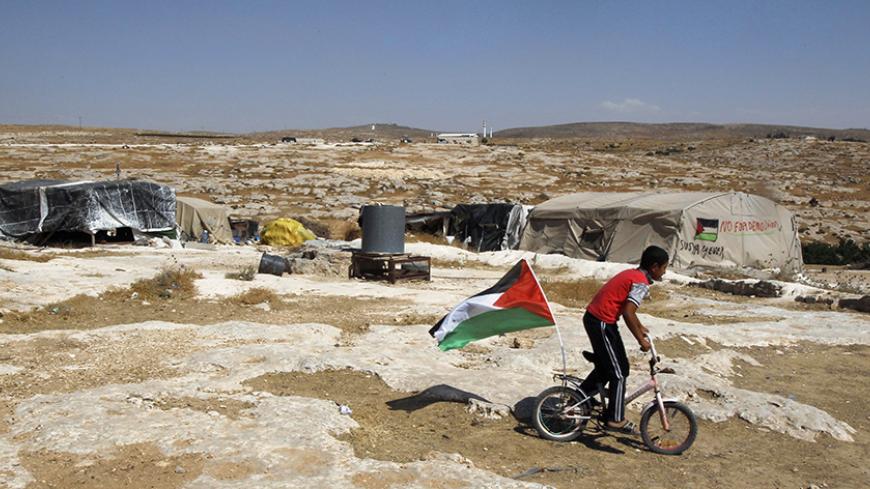 A Palestinian boy rides a bicycle past tents in the West Bank village of Susiya, June 24, 2012. - REUTERS/Baz Ratner

At the start of the Israeli Cabinet meeting June 7, Prime Minister Benjamin Netanyahu said, “As far as those pushing the boycotts are concerned, the settlements in Judea and Samaria are not the focus of the conflict, but our settling in Tel Aviv-Jaffa, Beersheba, Haifa and — of course — Jerusalem.” Minister Ofir Akunis, a former Netanyahu spokesman, followed suit with firm determination: “If anyone thinks this is an argument about Judea and Samaria, they’re wrong.” The duo’s claims, which reflect the official government line, are based on many of those “pushing the boycott,” in Netanyahu’s words, encouraging economic, cultural and academic sanctions against Israel, not just the settlements.

At a meeting several years ago in Brussels with boycott, divestment and sanctions activists, I asked why they didn't limit themselves to abstaining from buying settlement products, as I myself do, and were instead demanding that I be boycotted too. They answered, “Because the taxes that you pay fund the occupation, your children guard the settlers and your political and legal systems encourage the theft of Palestinian lands.”

The Palestinian village of Susiya — where delegations of the European Union and United Nations agencies met June 8 with Palestinian Prime Minister Rami Hamdallah — is not located in Tel Aviv, Haifa or Jerusalem. The small village, which has been a recent focal point of the conflict between Israeli and Palestinians, sits in the southern Hebron Hills, outside Israeli territory, in the West Bank. The story of the village embodies Israel’s conduct on the West Bank in general and in particular in Area C, where the Oslo Accord gives Israel security and administrative control. It is an especially grating example of what EU representatives meant at the start of 2012 when they wrote that the result of Israeli policy in Area C, which constitutes 62% of West Bank territory, has been the "forced transfer of the native population."

Susiya is located in desert terrain, part of which still retains a biblical character. Its Palestinian agricultural communities, which maintain a traditional way of life, live in caves and tents. The village has been inhabited for hundreds of years. Documentation of habitation in the region dates back to 1839, and the village is included on 1917 maps, from the British Mandate. Even Plia Albeck, the “Mother of the Settlements,” wrote from the state prosecutor’s office in 1982 that the village lands are the residents’ private property. None of this, however, has made a difference.

In 1983, the Jewish settlement of Susiya was erected next to the Palestinian village. With the changed demographics came a change in authorities’ attitude toward the original residents. In 1986, land was expropriated for “public needs,” the residents were expelled from their homes, and most of their property was confiscated. It was quickly revealed that the so-called public need was an archaeological site accessible to all — except the area’s Palestinian residents. A military directive banned them from entering the settlement area. Left with no other alternative, the exiled Palestinians settled at a spot several hundred meters from their former homes and tried to get on with their lives. They were then forced from there as well. The acts of harassment, destruction and expulsion that the residents of Susiya have endured and still confront are too numerous to list here. This theater of the absurd reached new heights when the right-wing Regavim organization petitioned the Supreme Court in 2012, demanding the demolition of the houses in the village, which it termed “an illegal outpost.”

Last month, the Supreme Court rejected the Palestinian residents’ petition for a temporary injunction against the destruction of their village until their scheduled case is heard, in early August. Of note, the judge who handed down the decision is No’am Solberg, a resident of the settlement of Alon Shvut. The judge’s terse ruling is based on a decision by the regional planning and zoning subcommittee of Judea and Samaria. There is no Palestinian representation on the committee, just as there is none in any other statutory panel. Palestinians living under occupation are not represented. Panels are comprised solely of representatives of the sovereign military power, including settlers, who represent the policy of the government and the Knesset. According to data published by the UN Office for the Coordination of Humanitarian Affairs, only about 1% of Area C has been zoned for Palestinian development.

It is hard to understand Israel’s rush to carry out such provocative decisions while it moans and groans about anti-Israeli sentiments bordering on anti-Semitism. How can the top politicians on the right ask the left wing to stand by them as they promote the most dangerous of ideas? Do they believe that the smoke screen that manages to conceal their actions from the Israeli public to a large extent will also blind members of the international community? How will they be able to convince the European delegates who visited Susiya this week to postpone implementation of the May 18 decision by the European Commission to proceed with the settlement product labeling initiative? How many from among the delegates who listened to village residents' stories about their expulsion will take seriously the hollow claim by Israeli officials that the labeling will “damage the peace process”?

In the talking points issued by the Israeli government, everything is organized and elegantly phrased, but in fact Israel continues to deepen its hold over the territories, which the entire world believes should be part of a Palestinian state, should one be established. In fact, different rules apply to Jews and to Arabs on that same strip of land. This is the reality on the Hebron Hills, not on Mount Carmel, in Israel. Anyone who thinks the same law should apply to Hebron and to Haifa should take into account that the boycotters will apply the same rules to both. After all, residents on both sides of the Green Line contribute their share of votes to the right-wing parties that advocate settlement building.

The democratic world is currently labeling settlement products in an attempt to salvage the prospects of implementing the two-state solution. If Israel undermines this effort with more events like the one in Susiya, it should not be surprised when the world starts labeling products made in Tel Aviv and Haifa, too.