Al-Monitor’s Lena Odgaard and Raed Khoury present video coverage of the conflict over a small Palestinian village and herding community in the West Bank. 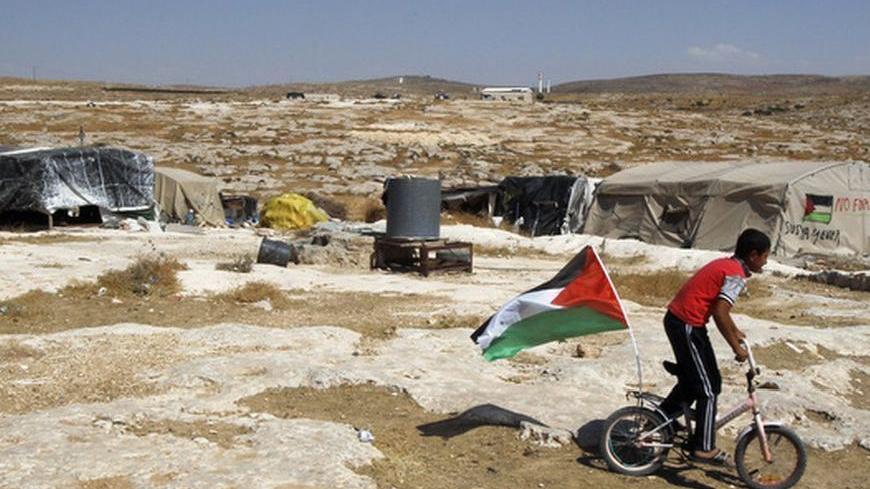 SUSIYA, West Bank — As the conflict escalates in Gaza, a dispute rages over Susiya, a small Palestinian village and herding community in the Hebron hills of the West Bank.

The Israeli human rights organization Rabbis for Human Rights appealed the order on behalf of the villagers. But if the demolitions are carried out, it will be the third time that the residents have been expelled and seen their homes destroyed.

Since the early 1980s Susiya residents and Jewish settlers have been locked in a legal battle over the land. Three years after Jewish settlers began inhabiting the land in 1983 — also calling their new settlement "Susiya" after an old Judean village — Israel declared the area an archaeological site and ordered the evacuation of the Palestinian village to make room for a national park.

Excavation teams had then found the remains of an ancient synagogue. But Palestinians argued that they held Ottoman titles to the land, and Israeli anthropologist Yaakov Havacook dates their presence in Susiya back to the beginning of the 19th century.

After their first eviction in 1986, Susiya residents decided to resettle a few hundred yards away from their original village, on land they still claimed was theirs. In 2001, after a Susyia settler was killed during the second intifada, the Israeli army again destroyed the Palestinian village as an act of punishment. The Supreme Court eventually allowed the residents to come back, but prohibited them from building new structures — a call they did not heed, convinced that their property titles gave them rights to the land.

The June 2012 demolition orders came after a self-described Zionist organization, Regavim, petitioned the Israeli Supreme Court to declare the village a "security threat” to the Susiya settlement as well as an “illegal outpost” — terminology usually used in the context of Israeli settlements established without authorization from the Israeli military administration or the government.

According to international law, Israeli West Bank settlements are in fact illegal. A hearing is scheduled on January 31, 2013 for Regavim to argue its case. Meanwhile, the Supreme Court has issued an interim order prohibiting any new construction in the village. In an email to Al-Monitor, Rabbis for Human Rights said they did not know when they would get an answer to their demolition-order appeal.

Human rights defenders fear that if the order is carried out, it will not only mean the end of Palestinian Susiya, but also set a precedent for the demolition of other villages and the disappearance of herding communities in Area C of the West Bank. Area C — which was designated as such under the 1993 Oslo Accords and constitutes more than 60% of the Palestinian territory — is where almost all Jewish settlements lie and is under full Israeli control.

According to the UN Relief and Works Agency (UNRWA), 418 Palestinian structures were demolished and 660 people displaced in the West Bank in the first eight months of 2012 alone. Structures include houses and makeshift homes — often tents, huts and tin shacks — shelters for livestock, rainwater-collection cisterns, solar panels and community centers. Last year, UNRWA expressed worry over the significant increase in Palestinian house demolitions. According to the Israeli human rights and pro-peace organization Israeli Committee Against House Demolitions (ICAHD), the number of demolitions doubled between 2009 and 2011.

Structures are demolished based on the argument that they are built without permits, hence illegally. But as Israel only allows Palestinians to build on one percent of Area C and rejects more than 90% of building-permit applications, most Palestinians must choose between building without a permit to accommodate their natural growth, or not build at all. They tend to opt for the first solution.