Syrian Kurds have their own newspapers and radio stations, but are beset by familiar political challenges. 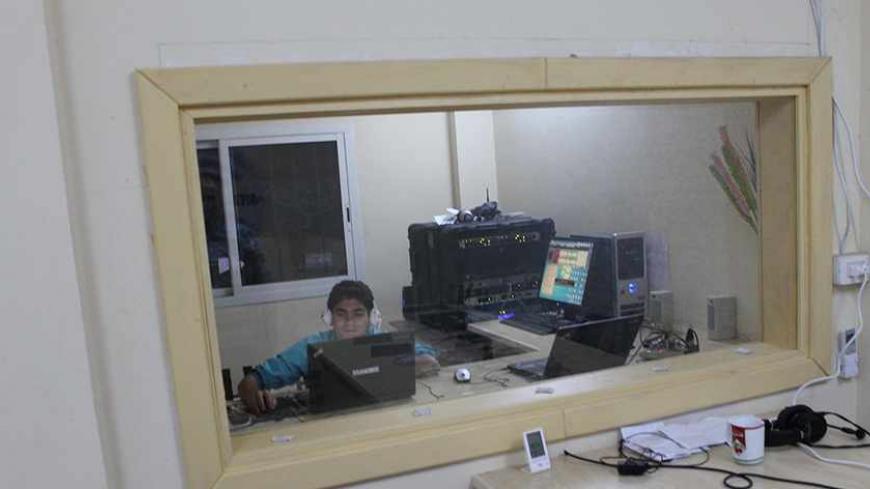 Before the civil war in Syria, Kurdish media couldn’t operate in Syria. Mohammed Kemal, the head of the Free Media Union, an association established after the unrest in June 2012, told Al-Monitor in Qamishli that the first Kurdish TV stations — such as MED TV, Roj TV and Kurdistan TV — faced difficulties in operating.

“We didn’t have any reporters who could report the news or any programs, because the organizations would be accused of being a terrorist organization by the regime of Syria,” he said. As a result, Kurdish journalists operated secretly, at the risk of being exposed, arrested and tortured by Syrian authorities.

Berfin Yildiz, who has her own program on the newly established Kurdish Ronahi TV, told Al-Monitor, “People were afraid to make programs before.” Therefore, when Syrian Kurds rose up against the Syrian government in Qamishli in March 2004, there were almost no on-the-ground reports from Syria.

Only Kurdish TV stations affiliated with political parties, such as Kurdistan TV and Roj TV based outside of Syria, were able to report on the events with smuggled tapes. But in general, these TV stations focused either on Kurds in Iraq or Turkey.

Now, Syria’s Kurds have their own media organizations and even successfully set up organizations to help foreign journalists cover developments in Kurdish areas. Moreover, Kurdish journalists can now freely operate in Syria, although tensions between the Kurdish political groups create problems.

Feridun Qajo, the head of Arta FM broadcasting — a new radio station broadcasting from the Kurdish city of Amuda — said that, until now, “there is no Kurdish TV [channel] that is not supported by political parties.”

The pro-PYD media, such as Hawar News and Ronahi TV, relied on the help of the Europe-based Kurdish Firat News and Roj TV to establish their news organizations.

“You can say that we didn’t get any support from south Kurdistan [Kurdistan Region of Iraq], we got most support from north Kurdistan [Kurdish areas of Turkey],” said Kamal. As a result, the pro-PYD media are the strongest on the ground, while pro-KNC views are mostly broadcast through Iraqi Kurdish channels that devote limited time to Syrian Kurds and are funded by Barzani’s KDP.

“[The KDP] have trained some people and media to be an alternative to the new media channels, like Ronahi, to not help Rojava [Kurdish areas of Syria,” Kamal added.

Moreover, the well-funded, pro-Syrian opposition channel Orient TV also broadcasts one hour in Kurdish. The Arab reporters are often supportive of the Syrian rebels, while the Kurdish ones support the PYD.

“In the Arabic news, the PYD are shown as terrorists, while the Kurdish reports are sympathetic to the PYD,” said Him Omar, a founder of the independent Kurdish news website Welati.

Therefore, the PYD security forces allow Orient TV reporters to operate in Kurdish areas. Still, most of the Kurdish news organizations have faced financial difficulties, and therefore most media organizations are affiliated with parties. According to Omar, both the PYD and the KDP approached him to fund Welati, but he refused both offers.

The first Kurdish-language newspaper in Syria, the bi-monthly Nudem, also claims to be a volunteer organization. “We are ready to get any [financial support], but we don’t,” said Massoud Hamid, Nudem’s manager.

Therefore, the most well-funded media organizations are those from the Syrian opposition and Iraqi Kurdistan. Some of the Iraqi Kurdish channels that support Barzani are critical of the PYD, while other channels close to Barzani’s rivals support the PYD.

To deal with the new growth of Syrian Kurdish media, there is the Free Media Association. “Our job is protecting journalists and helping them to do their job freely and easily,” said Mohammed Kamal, the organization's head.

The group trains journalists, gives permission to media organizations to operate and also helps foreign journalists who have to register at their office in Qamishli. But the KDP-funded media don't recognize this organization, they have their own journalistic association for Syrian Kurdish journalists.

“We have some attacks from channels like Rudaw and Zagros [Kurdish channels from Iraq] against our association and the Free Media Union. They accuse us of belonging to a single party [PKK],” Kamal said, stating that they do not support a single party.

Despite the competition between the PKK and the KDP, all media, even media critical of the PYD, are welcome at the news conferences of PYD-affiliated Kurdish security forces. This doesn’t mean there are not problems with press freedom.

From time to time, Syrian Kurdish journalists are arrested if they cover sensitive issues, in both Syria and the Kurdistan Region of Iraq. In general, they are quickly released.

Qajo’s radio station Arta FM claims to be independent and operates only in Amuda. Most Kurdish radio stations only have limited broadcasting range in the three Kurdish enclaves of Ain al-Arab (Kobani), Afrin and Hassakeh, in Syria.

One of the biggest problems for radio stations is the lack of reliable electricity. “Sometimes, because of electricity problems, you can hear Ronahi TV [broadcast from outside Syria] on the radio,” said Haqi Haci, a radio journalist in the Arab department of Radio Cudi, broadcast in Hassakeh province.

Moreover, much news can be found online, on news websites and social media. “The problem is that their role weakened after Internet wasn’t available in west Kurdistan [Kurdish areas of Syria] so much,” Kemal said.

The strong role of the PYD in Syria also changed the positions of pro-revolution organizations such as Welati and Orient TV.

“We used to be considered pro-revolution, but now we leave the revolution to the opposition. The role of the media is too important to be pro-revolution,” said Omar from Welati, which also interviews PYD officials.

Thus, the Syrian crisis created the opportunity for Syrian Kurds to report on their own events, but they continue to have problems with finances, political disputes and a lack of good electricity. The Kurdish media in Syria will likely continue to mature, as happened with the Iraqi Kurds once they became autonomous after the Western imposition of a no-fly zone in 1991. But just as in Iraq, the Syrian Kurdish media remain heavily influenced by political parties.