US, region pivot to confront terrorist threat in Syria 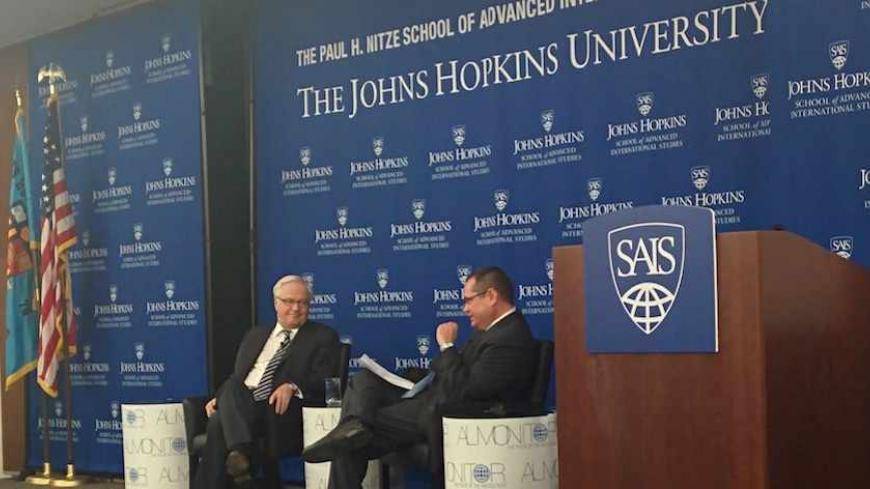 Vitaly Churkin, permanent representative of the Russian Federation to the United Nations, speaks with Andrew Parasiliti, editor & CEO of Al-Monitor, at a conference on “The US, Russia and the Middle East” cosponsored by Al-Monitor and the Paul H. Nitze School of Advanced International Studies, in Washington, Dec. 5, 2013. - Al-Monitor

Just this past week, the Islamic State of Iraq and al-Sham, an al-Qaeda-affiliated group, attacked the ethnically mixed Iraqi city of Kirkuk, a further sign of the linkage between terrorism in Syria and Iraq. The relative security of Iraqi Kurdistan, whose capital, Erbil, suffered a deadly attack in October along with the rest of Iraq, is under an unprecedented threat from the spillover of the Syria war.

The rise in terrorism is giving increased urgency to finding a political solution to the Syria conflict, including diplomacy with the Syrian government, to stem the surging jihadist threat.

The New York Times on Dec. 3 quoted former US diplomat Ryan Crocker as saying that in matters of counterterrorism and other issues, “We need to start talking to the Assad regime again.” Crocker added, “It will have to be done very, very quietly. But bad as [President Bashar al-] Assad is, he is not as bad as the jihadis who would take over in his absence."

Rep. Mike Rogers, R-Mich., chairman of the House Permanent Select Committee on Intelligence, on Dec. 5 at a conference on “The US, Russia and the Middle East” co-sponsored by Al-Monitor and the Paul H. Nitze School of Advanced International Studies at Johns Hopkins University, said: “I have never seen a pooling of the numbers of al-Qaeda. We didn’t even see this in Iraq at the height of the Iraq War from foreign fighters — from regional attraction into the eastern provinces of Syria and the western border area in Iraq. … So you think about why I’m nervous. We have our allies looking for other partners in the region now. We have this pooling of al-Qaeda. We don’t have a good operation to vet rebels on the ground in the way I think we need to. This is a recipe for disaster.”

In a further sign of a trend away from a military solution in Syria, Khalid bin Mohammed Al Attiyah, Qatar’s minister of foreign affairs, speaking on the same Manama Dialogue panel as Zebari, stayed clear of advocating a military option in Syria, instead making a passionate call for humanitarian intervention, proclaiming Qatar’s support for the “Syrian people” and declaring that Qatar “never supported terrorists in Syria.” Last year, at the 2012 Manama Dialogue, Attiyah had lauded the expansion of the Syrian Military Council and advised against excluding any party from the Syrian opposition, including those who might be considered terrorists, saying, “What we are doing [by excluding these groups] is only creating a sleeping monster, and this is wrong. We should bring them all together, we should treat them all equally, and we should work on them to change their ideology, that is, put more effort altogether to change their thinking. If we exclude anything from the Syrian elements today, we are only doing worse to Syria. Then we are opening the door again for intervention to chase the monster.”

This year, Attiyah qualified his comments of a year ago by distinguishing between Syrians opposed to the government of Assad and foreign terrorist groups fighting there.

Zebari, for his part, called on Syrian opposition groups to negotiate directly with the Assad government to end the war and said such a negotiation would legitimize them.

Vitaly Churkin, Russia’s ambassador to the United Nations, said at the Al-Monitor-SAIS conference that while Moscow is not necessarily wedded to Assad staying in power, any change would be a “political” decision for negotiations between Syrians, not something imposed by outside powers or opposition groups, and that such a change should not be a condition for the Geneva II negotiations.

The “joint plan of action” agreed on by Iran and the P5+1 countries in Geneva on Nov. 24 has also contributed to an overall shift in the tone of discussions about “regional security” in the Middle East.

Former senior US diplomats Daniel Kurtzer and Thomas Pickering and former Iranian Ambassador Seyyed Hossein Mousavian wrote this week for Al-Monitor: “Timely implementation [of the joint plan of action] will not only build trust and credibility, but will also significantly improve the atmosphere and prospects for a full agreement within the next six months. Such a trend would facilitate further constructive cooperation between Iran and the world powers on other crises in the Middle East such as Syria, Afghanistan and Iraq. The interim agreement — and its faithful implementation — is a significant opportunity which should not be missed or it will constitute a failure of unimaginable proportions.”

In Israel, the shift toward realism following the interim agreement is slowly taking hold. On Dec. 8, Israeli President Shimon Peres, in response to a question from CNN’s Richard Quest as to whether Peres would be willing to meet with Iranian President Hassan Rouhani, replied, “Why not? I don’t have enemies.” Peres added, “It's not a matter of a person but of a policy. … The purpose is to convert enemies into friends.”

The Financial Times reported on Dec. 6, “After several weeks when Prime Minister Benjamin Netanyahu openly tried to lobby US public opinion against the interim agreement with Iran reached last month in Geneva, the Israeli government is now looking to use its influence in Washington to shape the administration’s negotiating position.”

Al-Monitor’s Israel Pulse has been all over this trend from the start, as this column reported last week: “In Israel, despite a skeptical public and statements of alarm by Prime Minister Benjamin Netanyahu, there is also awareness among national security leaders that the deal with Iran may have its advantages, and that Israel is poorly served by putting itself at odds with the international coalition that forced Iran to negotiations.”

Former US National Security Adviser Zbigniew Brzezinski, also speaking at the Al-Monitor-SAIS event, argued that there is a “different game” in the Middle East, where Russia, and eventually China, can be more instrumental in conflict management, as in Syria.“To some extent we need Russia. We need China,” Brzezinski said. “We need both of them to some extent more than we need Britain or France, the former colonial powers in the region. … All are likely to suffer if things blow up.”