Doha tilts away from regime change in Syria and opens up a channel to Hezbollah. 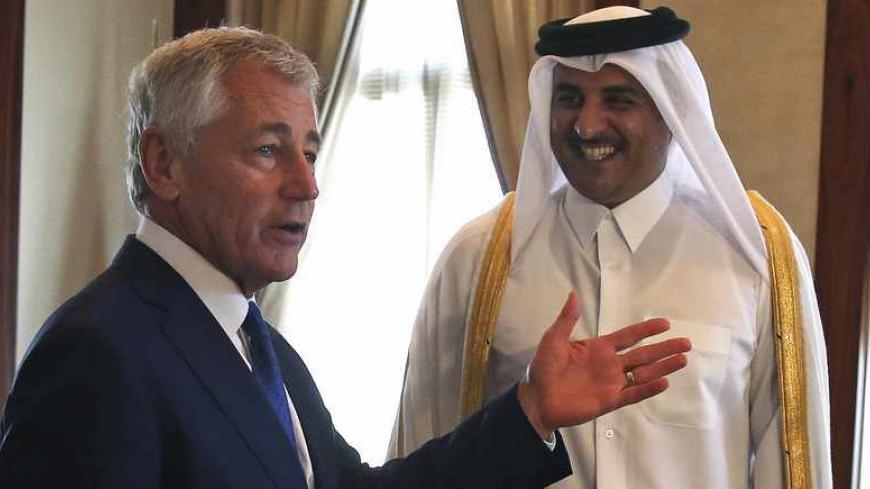 BEIRUT — When the Free Syrian Army (FSA) first came to light more than two years ago, the main financial backers and supporters were Qatar and Turkey — both countries that were leading efforts to topple Syrian President Bashar al-Assad and his regime. Back then, the FSA was the main umbrella most of the Syrian militants came under despite differences in thoughts, goals and doctrines. The FSA was to a certain extent the army of the regime’s main opponent, and most regime soldiers who decided to defect found in the new revolutionary force the right door to knock on.

Today, the FSA seems to be having its worst days. For months, its forces fought multiple wars with both the regime and its allies and fellow revolutionaries fighting under Jabhat al-Nusra and the Islamic State of Iraq and al-Sham (ISIS), both al-Qaeda-affiliated groups. An Al-Monitor piece written by Edward Dark explained more on the current situation of the FSA.

What are the main reasons behind the new situation? An Arab official from a country that used to be involved in the military support of the Syrian revolution revealed to Al-Monitor on condition of anonymity that regional reasons are behind the current situation: mainly, a unified Turkish-Qatari decision to retreat from the Syrian mud after reaching a conclusion that the political solution might be the best choice, not only for the Syrians but also for the region.

The source, an official who visited FSA-controlled areas in Syria twice during the crisis, stated that the reason behind backing the revolutionaries back then was “to topple the dictatorship of the Assads and help the majority of Syrians fulfill their demands.” The official added, “Qatar had excellent relations with Bashar al-Assad. The former emir and he were very good friends, their wives were friends; the emir tried to help find a solution in the beginning, even Al Jazeera didn’t start its anti-Assad coverage until he failed to deliver what was agreed-on before his first speech in the parliament.”

According to the source, “The former emir convinced President Assad that his first speech in the parliament should have a reconciliatory tone and must announce real reforms, and that Qatar will back him and Al Jazeera will do the public relations job.” He added, “The speech was written and ready for delivery, even a copy of it was given to the Al Jazeera senior management to prepare for the breaking news.” He recalled that the draft was written by Vice President Farouk Alsahrea. “Two hours before the speech, everything changed, and the speech was postponed for a couple of hours," the official said. "Then we heard something different: It was clear that there were no intentions to change; orders were given to stand beside the Syrian people in the streets. There was a perception that he’ll fall in six months' time, since people are in the streets,” he added.

Almost three years of bloodshed in Syria, more than 100,000 people dead and the rise of al-Qaeda in Syria are giving the Qataris and Turks a clear indication that what is to come is worse: “Since the fall of the Muslim Brotherhood in Egypt, many things changed in the region; it was as if there’s a decision to make the group’s main allies in the region pay the price, and in Syria this was clear,” the official source elaborated. “Groups backed by Saudi Arabia were battling the FSA more than they fought the regime, not to mention al-Qaeda affiliates in Syria who have a completely different agenda and their main enemy isn’t the regime, [but] rather the FSA.”

When the former emir of Qatar stepped down, there was an internal decision to review policies. “Qatar is a small country with a lot of potential," the source said. "There was a need to set priorities, development and business or politics, and the overwhelming answer was the first.” The source explained that this needed time, “with the help of main regional players in the region, and after arriving at a certain conclusion that there’s no real horizon in Syria, the decision was taken. Qatar stands by the Syrian people and will continue to help them, but it will help more in facilitating a peaceful end to the conflict.”

According to the source, a Qatari official visited Lebanon weeks ago and met Hezbollah Secretary-General Hassan Nasrallah. “The meeting was the first in almost two years. Doha wanted to hear from all parties equally," the source said. "For years, it played a role in mediating between rivals. Even if the relation with the regime was bad, there were certain factions that might be able to help.” The source denied any direct links with the regime in Syria: “This is not on the agenda for now,” although this writer knows that a meeting between Hezbollah's Undersecretary Naim Kassem and Qatar's new ambassador to Beirut, Ali bin Hamad Al Merri, will be held on Dec. 16.

Last week, during a panel at the Manama Dialogue, and in another sign of a trend away from military solution in Syria, Qatari Foreign Minister Khalid bin Mohammed Al Attiyah made a passionate call for humanitarian intervention and kept clear of advocating the military option. Al-Monitor's Week in Review mentioned the same minister's position on the Syrian crisis just a year ago when, during the 2012 Manama Dialogue, he lauded the expansion of the Syrian Military Council and advised against excluding any party from the Syrian opposition, including those who might be considered terrorists, saying, “What we are doing [by excluding these groups] is only creating a sleeping monster, and this is wrong.

"We should bring them all together, we should treat them all equally and we should work on them to change their ideology, that is, put more effort altogether to change their thinking. If we exclude anything from the Syrian elements today, we are only doing worse to Syria. Then, we are opening the door again for intervention to chase the monster.”