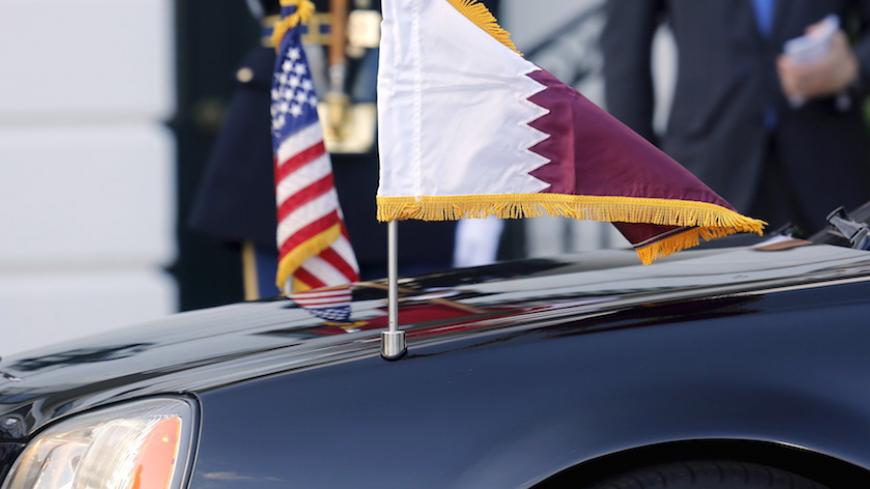 The car carrying Qatar's Emir Sheikh Tamim bin Hamad Al Thani arrives on the South Lawn as US President Barack Obama plays host to leaders and delegations from the Gulf Cooperation Council countries at the White House in Washington May 13, 2015. - REUTERS/Jonathan Ernst

Qatar has quadrupled its spending on US influence-peddlers to help reverse an onslaught of bad publicity over the country's alleged role in supporting radical Islamists across the Middle East.

The Gulf emirate expanded its stable of lobbying and public relations firms from two to five in 2015 and paid them a combined $3.34 million, according to a review of financial disclosures. That’s up from $764,000 the year before.

The spending binge followed sharp criticism from US lawmakers and Treasury officials that Doha has turned a blind eye to questionable money transfers. Neighboring Gulf nations upset over Qatar's post-Arab Spring support for Islamist-leaning opposition groups have also hired US operators to tarnish the emirate’s reputation in the United States.

Qatar’s investment appears to have paid off. Congress and the Treasury Department have largely silenced their past criticism, while the State Department's most recent terrorism report released in early June gives the country credit for a slate of recent legislation on charities and cybercrime prevention, while nevertheless bemoaning Qatari citizens' continued support for al-Qaeda's Syrian affiliate.

"Despite these efforts, entities and individuals within Qatar continue to serve as a source of financial support for terrorist and violent extremist groups, particularly regional al-Qa’ida affiliates such as the Nusrah Front," the report concludes. "Qatar has made efforts to prosecute significant terrorist financiers."

Qatar has also lobbied heavily to facilite major arms sales despite concerns that such weapons deals could erode Israel's so-called Qualitative Military Edge, or QME. Top senators have urged the Barack Obama administration to move ahead with a proposed sale of 72 F-15E Strike Eagle fighter jets.

“I want the administration to bring forth the Qatar sales, and I've met with the White House toward that end," Senate Foreign Relations Chairman Bob Corker, R-Tenn., told Al-Monitor in March. "I support it and hope that they're going to be forthcoming."

The Pentagon and the State Department have signed off on the sale of 36 of the planes in a deal worth about $4 billion, Reuters reported in April, but the White House National Security Council has yet to sign off. Obama had been expected to announce the sale during his trip to the Gulf that month, but declined to do so amid continuing negotiations with Israel over a new 10-year military aid package.

After spending relatively little on direct lobbying in recent years, the emirate hired Portland PR in late 2014 to promote Qatar's "views and efforts.” In turn, that firm tapped the Gallagher Group last year to help with the contract, while the embassy in Washington hired Mercury Public Affairs and Levick Strategic Communications for congressional lobbying and outreach to nongovernmental organizations, respectively.

The “status of the Qatar FMS [Foreign Military Sales] application” has been a main focus of Mercury’s recent activities, lobbying records show. But salvaging its reputation has also been top of mind for Qatar.

Despite pouring millions of dollars into the reconstruction of Gulf of Mexico communities ravaged by Hurricane Katrina a decade ago, Qatar failed to secure the glowing headlines it was surely hoping for. Instead, the country drew the ire of the Treasury Department in 2014 for its allegedly “permissive” attitude toward terrorism financing.

That same year, lawmakers on the House Foreign Affairs Committee tarred the country as a United States “frenemy” for hosting Hamas leader Khaled Meshaal and pledging money to the organization. That criticism has quieted down over the past year, however, as Qatar has largely fallen back in line behind Saudi Arabia’s regional leadership as it focuses its attention on the scandal-plagued 2022 World Cup.

Likewise, Qatari skeptics on the House Armed Services Committee have tempered their criticism of late. While their Defense authorization bill for FY 2016 requested a Pentagon report on the “risks and benefits” of a fighter jet sale to Qatar, this coming year’s bill contains no such provision.

Qatar has been less successful in its efforts to get the United States to adopt a more forceful policy against President Bashar al-Assad in Syria.

The emirate, which has hosted US-trained Syrian rebels, called for an emergency meeting of the Arab League in May as Assad’s forces intensified their bombing of Aleppo. The Qatari request noted the “dangerous escalation seen in Aleppo where civilians are subjected to massacres at the hands of the forces of the Syrian regime, which has led to the deaths and injuries of hundreds,” Al-Jazeera reported at the time.

The battle for Aleppo rages on, however, as the United States negotiates with Assad ally Russia over cooperation against the al-Qaeda-linked group that the recent State Department terror report accused Qataris of backing. The US strategy aims to step up strikes against terrorist groups that threaten the West while hoping Moscow will in turn restrain Assad, a US official told Al-Monitor, but some rebels warn that the plan will only free up Assad’s forces to focus on Aleppo.