Lobbying 2015: Qatar crawls in from the cold

Qatar is coming in from the cold in Washington as the gas-rich emirate falls into line with its Gulf neighbors’ stance against rebellious Islamist. 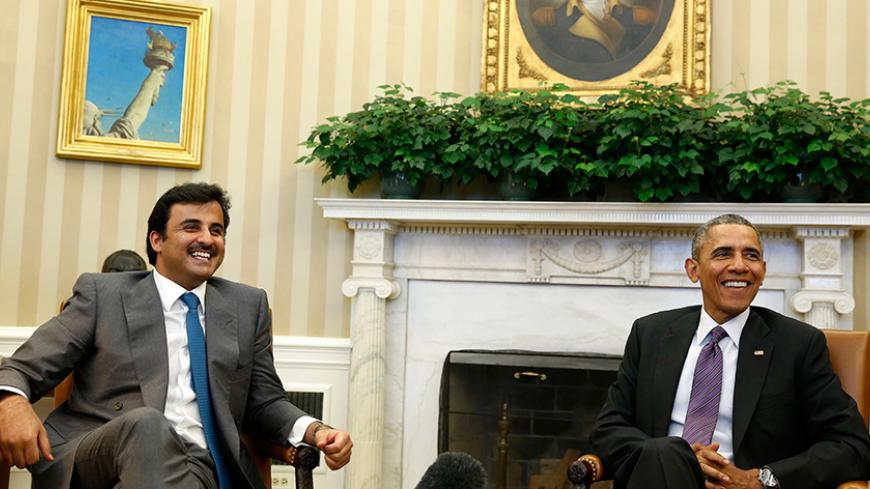 US President Barack Obama and Emir of Qatar Sheikh Tamim bin Hamad al-Thani smile while in the Oval Office at the White House in Washington, Feb. 24, 2015. -

Qatar is slowly coming in from the cold after international pressure forced it to rein in its independent streak.

President Barack Obama welcomed Emir Tamim bin Hamad Al Thani at the White House for the first time in February after the gas-rich micro-state began to moderate its support for Islamists across the region. The president hailed the young emir for joining the coalition against the self-proclaimed Islamic State (IS) while endorsing his calls for a democratic future in Egypt and the Palestinian territories.

"What we agree with," Obama told reporters after the meeting, "is that if our two countries are communicating frankly and constructively, and pursuing common strategies, that we can be a force for good for the entire region and for a vision of a Middle East that is democratic, that is prosperous, that is tolerant, that is representative of all peoples, and that is a force for good around the world."

The emir returned the favor two months later, when he was one of only two leaders of the Gulf Cooperation Council (GCC) to personally attend the president's GCC summit at Camp David. Participants came away with the promise of beefed-up US military support against Iran and a "renewed commitment to a concept of a Gulf-wide ballistic missile defense capability."

Powerful players in the US Senate are also ready to welcome Qatar back into the fold following its decision to join the Saudi-led campaign against Iran-backed Houthi rebels in Yemen. The annual Defense authorization bill from Armed Services Chairman John McCain, R-Ariz., recommends that the provision of advanced US fighter aircraft and joint exercises would "contribute to Qatar's self-defense and deter Iran's regional ambitions."

The House, however, is taking a dimmer view.

The same bill in the lower chamber mandates a Department of Defense report on steps the Pentagon is taking to convince Qatar to stop allowing "leaders of Hamas" and "terrorist financiers" from operating freely on its soil. The two chambers are currently negotiating a compromise version of the must-pass annual legislation.

The criticism follows a concerted campaign by critics including Israel and the Gulf states that take a dim view of Qatar's support for Arab Spring revolutionaries as well as Hamas in the Gaza Strip and the Muslim Brotherhood in Egypt. Congressional criticism culminated last fall as the United Arab Emirates poured $3 million over six months into an anti-Qatar lobbying blitz by former Treasury Department officials.

The clamor has since simmered down as the new emir — he took power in 2013 — has taken steps to expel a number of Muslim Brotherhood figures while keeping a tighter lid on Hamas leaders' activities. Qatar also joined its fellow GCC states in recognizing President Abdel Fattah al-Sisi as Egypt's legitimate president during the kiss-and-make-up Doha summit in December.

But Qatar has also responded by ramping up its own lobbying campaign.

After spending relatively little on direct lobbying in recent years, the emirate hired Portland PR last year to promote Qatar's "views and efforts." The Qatari government and its embassy in Washington jointly paid the firm $420,000 in the first three months of 2015.

So far this year, the Qatari Embassy in Washington has also hired Mercury Public Affairs ($1.86 million/year) for congressional lobbying and Levick Strategic Communications ($1.062 million/year) for outreach to nongovernmental organizations. A month later, Portland PR hired the Gallagher Group as a subcontractor tasked with lobbying the US government.

In addition to currying favor with key foreign policy and armed services committees, lobbyists with Mercury have also been keeping close tabs on the Treasury Department's choice of a director of Terrorism and Financial Intelligence. They've also tried to get the emir's pre-White House meeting op-ed in The New York Times inserted into the Congressional Record, to no avail.

"Addressing the root causes of terrorism ... will require political leaders to have the courage to negotiate pluralistic, inclusive, power-sharing solutions to regional disputes," the emir wrote. "And it will require that tyrants be held to account."

The message is resonating when it comes to Libya, where the United States and Qatar both support a political settlement between the internationally recognized government in the east and Islamist forces that have taken over Tripoli. In Syria, however, Qatar continues to push for President Bashar al-Assad's removal while the Obama administration is fixated for now on defeating IS.

Qatar has also been spreading its influence on TV, with the launch two years ago of Al Jazeera America into 48 million US homes. Al Jazeera spent $100,000 lobbying Congress, the White House and the Commerce Department in the second quarter of 2015, according to lobbying disclosure forms filed by DLA Piper.