US military aid to the tiny Gulf kingdom of Bahrain is flowing again after its strong anti-Islamic State stance and pricey PR push. 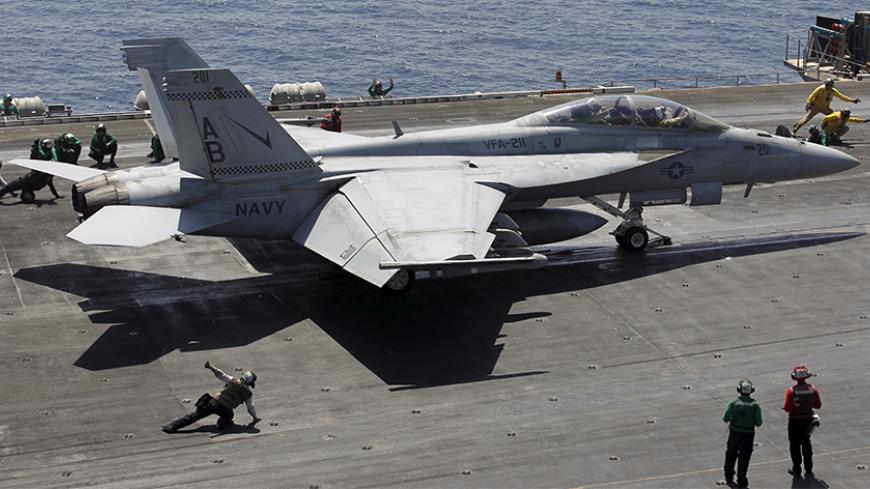 An F/A-18E/F Super Hornet is lined up for takeoff on the flight deck of the USS Theodore Roosevelt aircraft carrier in the Gulf, June 18, 2015. The US carrier is deployed in the region to act as a platform to strike key positions taken over by the Islamic State fighters in Iraq and Syria, according to the ship's press officer. - REUTERS/Hamad I Mohammed

The Barack Obama administration is resuming its military cooperation with Bahrain despite lingering human rights concerns.

The State Department in June lifted its hold on small arms and other weapons that could be used against protesters. The freeze was put in place following Bahrain’s 2011 crackdown on demonstrations; its removal is a tacit reward for Bahrain’s participation in the fight against the self-proclaimed Islamic State (IS) and Iran-backed Houthi rebels in Yemen.

“Bahrain is an important and long-standing ally on regional security issues, working closely with us on the counter-[IS] campaign and providing logistical and operational support for countering terrorism and maintaining freedom of navigation,” State Department spokesman John Kirby said in a June 29 statement announcing the decision.

The move follows an intense lobbying campaign by the tiny Gulf kingdom. Bahrain also stands to benefit from increased US defense guarantees to Gulf Cooperation Council countries in exchange for tamping down their objections to the nuclear deal with Iran.

The Saudi-aligned Sunni monarchy, however, continues to face lingering criticism for its repression of the Shiite majority’s aspirations.

The State Department is retaining its arms sales ban on the Interior Ministry while vowing to “continue to press Bahrain on our human rights concerns.” Proposed military aid for fiscal year 2016 meanwhile remains flat at $7.5 million, down from $25 million before the 2011 uprising.

In May, the House for the first time included in its must-pass annual defense legislation a provision that requires the Department of Defense to plan for a potential relocation of the US 5th Fleet if political tensions persist. A lobbying push by DLA Piper to get lawmakers to back the arms sales resumption also failed to get much traction.

The Bahraini government has declined to directly comment on the defense bill while making clear its displeasure at being told how to run its affairs.

“There is no doubt in the relationship between our two nations,” a Bahraini official told Al-Monitor on condition of anonymity. “The defense relationship has been established to protect the country from foreign threats and to safeguard regional stability. This has nothing to do with Bahrain’s domestic affairs.”

Manama, the capital of Bahrain, has responded by turning to its former colonial master, Great Britain.

The British government announced in December that it would open a permanent Royal Navy base in Bahrain, a first since independence in 1971. King Hamad bin Issa Al Khalifa followed up with a visit with Queen Elizabeth II at the Royal Windsor Horse Show in May that was widely seen as a snub to President Obama and his concurrent Gulf Cooperation Council Summit.

The stakes of a good relationship with the United States go beyond the military.

The kingdom is less resource-rich than its Gulf neighbors and depends on its 2004 Free Trade Agreement with the United States to help support a textile industry that exports an estimated $200 million worth of garments to the United States every year and employs some 6,000 people. To help preserve a key provision that allows Bahrain to use imported yarn and still benefit from preferential tariffs, the nation’s Economic Development Board in January hired Illinois-based Sorini, Samet & Associates for $10,000 per month, plus $30,000 per year in travel expenses.

The firm is led by former Labor and Commerce department officials from the administrations of Bill Clinton and George W. Bush. It had already been lobbying for Bahrain’s Ministry of Foreign Affairs since 2011 to defend the trade deal from criticism regarding the country’s labor practices.

Bahrain also hired Washington public relations firm Qorvis in 2011 as part of its post-crackdown damage-control strategy. With the addition of Anglo-American law firm DLA Piper last year Bahrain’s spending on foreign agents skyrocketed from $0 in 2009 to $1.15 million in 2013.

Bahrain scored a preliminary win on the trade front in January when the United States corrected the expiration date for the yarn provision from Dec. 31, 2015, to July 31, 2016 — a seven-month reprieve. The country, however, wants to further extend the provision and seeks “potential rule of origin changes that could provide additional US access for Bahrain’s apparel sector,” as per lobbying records.

Congress, however, appears to be in no mood to strike more trade deals, as evidenced by the Obama administration’s difficulty in getting traction on its proposed pacts with Europe and Pacific Rim nations. And the top Democrat on the trade-focused Senate Finance Committee, Sen. Ron Wyden, D-Ore., is a leading Bahrain critic who has personally pressed the State Department to keep the weapons ban in place.

In fact, the entire trade agreement could be in jeopardy amid accusations that Bahrain persecutes unionists and human rights activists.

The AFL-CIO union in 2011 asked the Obama administration to suspend the agreement following reports that workers were fired in retaliation for protesting. The Department of Labor declined, but in 2013 it formally requested ongoing consultations with Bahrain on the issue.