The House passed an annual defense bill that requires the Navy to plan for a potential relocation. 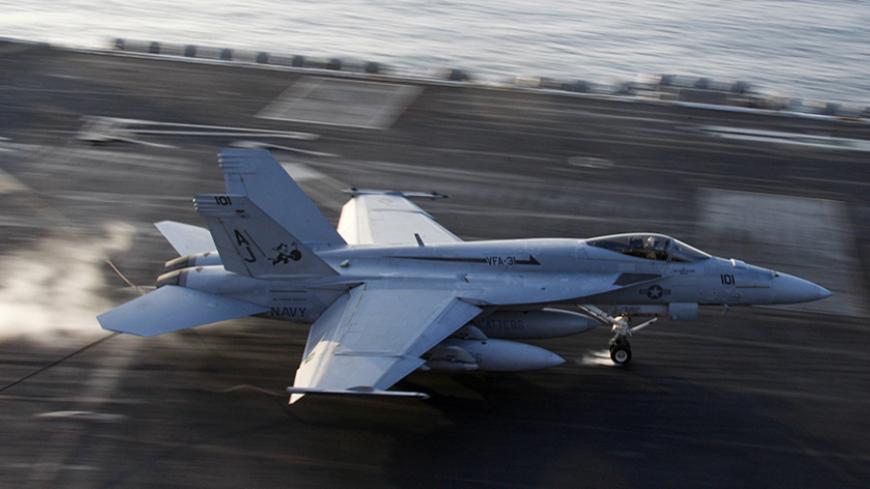 A F/A-18E Super Hornet of the Strike Fighter Squadron 31, known as the Tomcatters, conducts an arrested landing onboard the USS Theodore Roosevelt aircraft carrier in the Arabian Sea, Dec. 3, 2008. - REUTERS/Hamad I Mohammed

WASHINGTON — Congress is putting Bahrain on notice that it needs to get serious about political reforms if it doesn’t want to see 5,000 US sailors and Marines take their business elsewhere.

The House last week passed an annual defense bill that requires the Department of Defense to plan for a potential relocation of the US 5th Fleet if political tensions persist. Lawmakers made clear the provision was aimed squarely at putting pressure on the Sunni monarchy to respond to what they consider to be legitimate grievances of the majority Shiite population.

“The reason that we have to do some planning now for that contingency is exactly because of the Bahraini monarchy’s failure to address the concerns of the people,” the sponsor of the provision, Rep. Hank Johnson, D-Ga., told Al-Monitor. “If they choose not to address those concerns or do so in a heavy-handed way and somehow things end up getting worse there, then we may be forced to have to leave. And I don’t think any American policymaker wants to see that happen.”

The Bahraini government declined to directly comment on the legislative text but made clear its displeasure at being told how to run its affairs.

“There is no doubt in the relationship between our two nations,” a Bahraini official told Al-Monitor. “The defense relationship has been established to protect the country from foreign threats and to safeguard regional stability. This has nothing to do with Bahrain's domestic affairs.”

“Bahrain has an extremely strong defense relationship with the United States that spans decades, and has just been further reinforced after the conclusion of the GCC-US summit,” the official added. “We only expect this relationship to strengthen and grow.”

A Pentagon spokeswoman refused to talk about pending legislation. Military planners, however, have long balked at taking any action that could indicate a lack of support for a country that hosts the main US naval base in the Gulf.

“Most policymakers in the Department of Defense believe that the United States’ strategic partnership with Bahrain dictates that Middle East stability will trump calls for any military withdrawal,” Navy Cmdr. Richard McDaniel wrote in a 2013 Brookings Institution policy paper that argued for contingency planning.

“Because of a strong desire to support the government of Bahrain, losing critical access is not currently being considered, and strategic basing alternatives are not being developed,” McDaniel wrote. “As a result, the United States could be heading towards the loss of key access in a critical region.”

Indeed, the US-Bahrain relationship has continued to strengthen over time. The two countries in 2002 secretly extended their defense co-operation pact until 2016, the Financial Times reported nine years later, reportedly at the behest of Bahrain.

“President [Barack] Obama’s administration has been right to resist the calls made by some individuals to remove our support from Bahrain’s government and embrace a protest movement that has legitimate grievances, but is nonetheless being used by Iran for its own nefarious purposes,” retired Vice Adm. Charles W. Moore, the former commander of the 5th fleet, wrote in a 2011 Washington Times op-ed when he was an executive for Lockheed Martin. The op-ed, facilitated by lobbyists for Bahrain, also said, “Indeed Iran and its allies would be the only winners should the United States abandon our partnership with Bahrain at such a critical juncture in the history of the Middle East.”

The United States, however, continues to withhold some weapons that could be used against protesters following the 2011 crackdown despite Bahraini lobbying.

The Johnson amendment was championed by human rights groups, including the US-based Americans for Democracy and Human Rights in Bahrain (ADHRB), which unsuccessfully advocated for it in previous years.

“ADHRB welcomes the amendment and thanks Congressman Johnson for his continued support,” the group said in a statement. “ADHRB continues to encourage the United States to call on Bahrain to make meaningful, impacting reforms that increase political dialogue and representation in a push for a more stable and democratic society.”

The provision is now in the hands of the Senate, where the Armed Services Committee passed its version of the defense bill last week but has yet to make it public. Panel Chairman John McCain, R-Ariz., has called for a resumption of all weapons sales to Bahrain.

While McDaniel suggested New Doha Port in Qatar and Shuaiba in Kuwait as potential alternatives for the 5th Fleet, Johnson acknowledged the United States has no good options.

“There are no good options. I realize that. I think others in Congress realize that as well,” Johnson told Al-Monitor. “We would like the domestic situation in Bahrain to be settled — that’s the ideal. And that’s in the hands of the monarchy in Bahrain.”