Ferguson could lead to more US weapons for Middle East

Congress wants to clamp down on leftover military equipment going to local police departments, but what will happen to all that surplus gear? 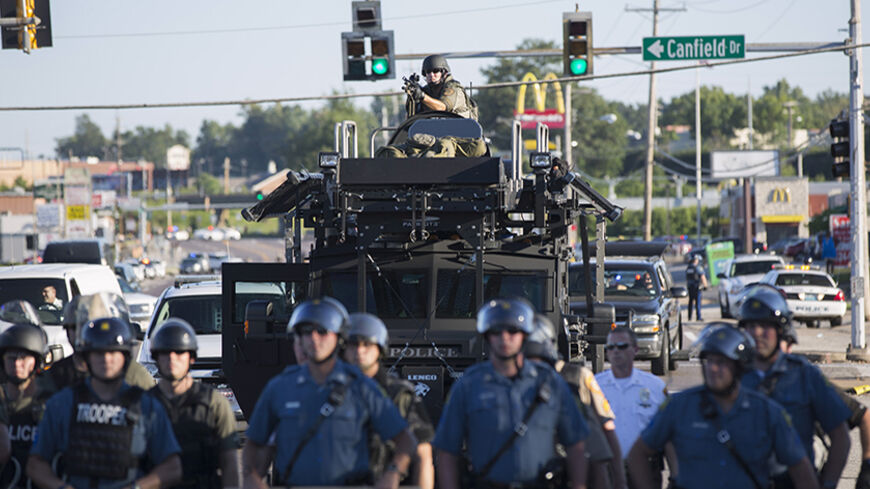 The images of small-town police officers pointing sniper rifles at protesters from atop armored trucks have many people drawing comparisons between Ferguson, Missouri and Baghdad.

If Congress gets its way, Baghdad is exactly where some of that military equipment may end up.

Lawmakers in both chambers have vowed to revisit two 1990s laws that allow the US military to unload its surplus vehicles, weapons and other gear on federal and state agencies to fight drug dealers and terrorists. One aspect of the debate that’s gotten little notice over the past month is that foreign governments — including many in the Middle East — have been drawing from that same pool for decades.

“All equipment transfers to other US government entities or eligible foreign partner nations is equipment that is excess to the needs of the DoD,” the Defense Department told Al-Monitor in an email. “US government requests are prioritized over foreign requests as required by the DoD disposition manual.”

Since the outbreak of the Arab Spring, the United States has transferred $121 million worth of surplus weapons and other military gear to six Middle East countries, according to an analysis of Defense Security Cooperation Agency records by Al-Monitor. That includes 231 periscopes for Israeli armored vehicles, 51 “Z Backscatter” mobile X-Ray vans for Iraq and 21.5 million tracer cartridges for Morocco.

Morocco was the biggest beneficiary of the Excess Defense Articles (EDA) program between FY 2011 and FY 2014, with $44 million. Other recipients include Israel ($28 million), Jordan ($21 million), Iraq ($17 million), Lebanon ($10 million) and Bahrain ($1 million). The transfers are in addition to the much greater military aid made available under the State Department’s Foreign Military Financing program.

The Defense Department makes the case for the program as a tool to “support US allies in their modernization efforts” and “assist Latin American and Caribbean nations in their counter-narcotics programs.”

Deliveries to foreign countries are made available either as a grant or at a deep discount from its original price under Section 516 of the Foreign Assistance Act of 1961. Even in the case of grants, the recipient country must pay for “packing, crating, handling and transportation of the equipment, as well as any repair or refurbishment,” according to the Defense Department, leading to many approved transfers not going through in the end.

The local police transfer program that has come under intense scrutiny following the Ferguson protests by contrast dates back to the National Defense Authorization Acts of 1990-91 and 1996-97. Federal and state agencies get first dibs under the so-called 1033 program, with foreign governments vying for the leftovers.

Now Congress is poised to shake up that relationship.

In the Senate, Homeland Security oversight panel Chairwoman Claire McCaskill, D-Mo., has announced a hearing this month into the “militarization of local police departments.” And House Armed Services member Hank Johnson, D-Ga., is ready to introduce legislation when lawmakers return next week that would bar the transfer of certain equipment to US law enforcement.

The bill, which has been in the works since well before the Ferguson events, does not instruct the Defense Department about what to do with such surplus equipment, however. The department told Al-Monitor it won’t all automatically end up in the hands of foreign governments.

Middle Eastern countries have shown an appetite for the sorts of items targeted by Johnson’s bill in the past.

The Lebanese army received 200 armored personnel carriers worth $10 million in current value as a grant in 2011, according to an Al-Monitor review of Defense Department records. Likewise, Jordan received 35 MRAPs worth $2.4 million last year.

Ironically, some of the biggest advocates of reining in what they call the “militarization” of US law enforcement also tend to think that selling — or giving — more weapons to the world’s least stable and most heavily armed region isn’t a great idea.

“Organizationally, we have real concerns about the export of weapons,” said Michael Shank, associate director of legislative affairs for the Quaker lobby Friends Committee for National Legislation. “But this bill shows the limits of what we can do initially.”

Shank said his organization, which is championing the Johnson bill, would encourage the Defense Department to recycle its excess supplies instead of sending them abroad. He said tackling the 1033 police supply program is part of a multipronged effort that his organization hopes will also include looking at Department of Homeland Security counterterrorism grants to US law enforcement as well as foreign arms transfers.

“We expect a lot of work in the coming months beyond 1033 to address what to do with this equipment when we’re bringing it back,” he said. “Can we dismantle it, can we recycle it?”