Some of last year’s biggest losers on Capitol Hill are spending big to avoid a repeat in 2015. 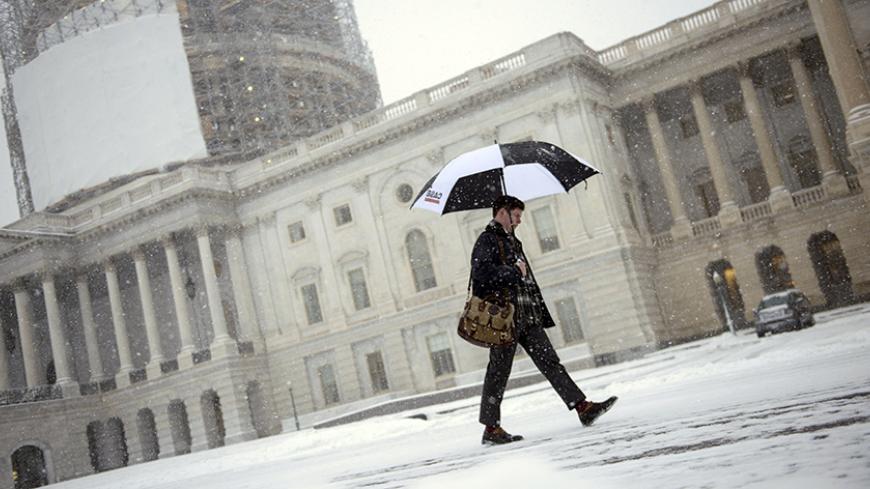 WASHINGTON — Middle Eastern nations that took a drubbing in the halls of Congress last year are beefing up their lobbying rosters in hopes of getting a better outcome in 2015.

The Palestinian Authority and its mission to the UN have hired two US firms to shore up Ramallah’s beleaguered Washington envoy in a bid to prevent threatened cuts to US aid.

Libya has retained the services of two consulting companies out of Texas in its bid to get its hands on millions of dollars in frozen assets and otherwise “strengthen” relations with the United States as the country spirals toward all-out civil war.

And Qatar kicked off 2015 by inking deals with Washington lobby and communications shops as it seeks to convince Congress that it’s on the right side of the war against Islamist extremism.

The new contracts are among several recent changes to Middle Eastern nations’ efforts to influence the US government, according to an Al-Monitor review of lobbying disclosure reports available as of mid-January. Taken together, they indicate a stepped up desire to get through to key decision makers struggling to make sense of an increasingly fractured region.

The Palestinian decision to hire Squire Patton Boggs comes as lawmakers of both parties have promised a “strong response” to the PA’s decision to join the International Criminal Court. The giant lobbying firm will be paid $55,000 per month to “help ensure” that the United States delivers on its $400 million annual aid budget for the Palestinians while pushing back against Israel’s decision to freeze tax revenue transfers.

In addition, the Palestinian mission to the UN has hired New York’s Independent Diplomat firm for help with its negotiating strategy as the PA seeks to put diplomatic pressure on Israel without prompting an international backlash.

Meanwhile, the pro-Israel lobby in the US has continued to pay for US lawmakers to travel to Israel in the wake of last summer’s war in Gaza. In August, the American Israel Education Foundation spent $174,000 on a weeklong visit by nine House members of both parties.

Libya’s renewed attempt to get its hands on the frozen assets comes as the country is torn between two rival governments, an Islamist-dominated militia in Tripoli and the elected government of Prime Minister Abdullah al Thani in Tobruk. The lobbying contracts were signed by al Thani allies who lead a national board tasked with retrieving assets looted by the regime of deposed strongman Moammar Gadhafi.

Qatar’s embassy in Washington for its part has hired lobbying firm Mercury and strategic communications company Levick to push back against accusations by US officials — and its Gulf rivals — that the tiny gas-rich country is backing Islamist groups across the Middle East in a regional contest for influence. Mercury’s $155,000 per month contract specifically requires the lobby shop to contact House and Senate members as well as think tanks and other organizations to further commercial and bilateral ties.

And Turkey, which has come under similar criticism, has added the international US-based law firm Greenberg Traurig to its growing roster of lobbyists for $26,000 a month. The firm, tasked with “strengthening the Turkish-American relationship and educating government officials on issues of importance to Turkey,” lost no time trying to shore up relations with the congressional Turkey Caucus and lawmakers with jurisdiction over Foreign Affairs since signing up with Turkey as a subcontractor to the Gephardt Group over the summer.

Check out Al-Monitor’s lobbying series for the following updates:

Editor's Note: Previous reporting that Turkey has terminated its contract with Alpaytac was incorrect. The Chicago-based PR firm however ceased working for the youth advocacy association Genc Siviller in Oct. 2014.