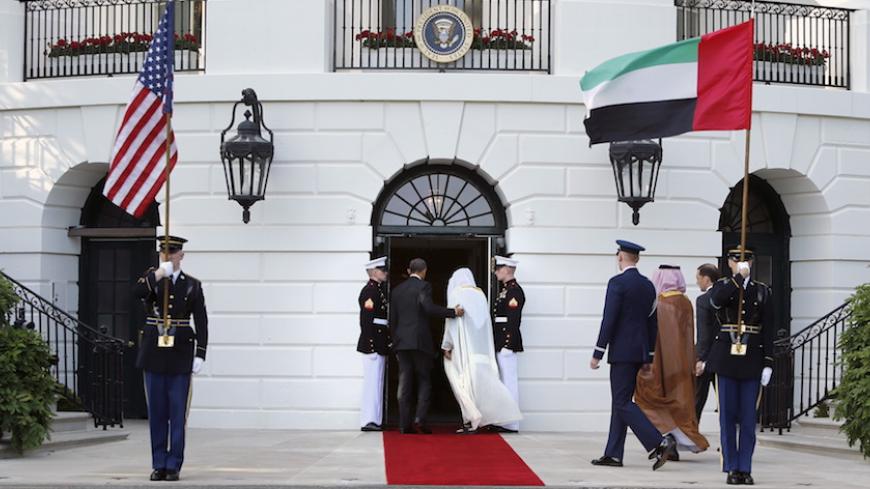 US President Barack Obama (L, in doorway) walks with UAE Crown Prince Sheikh Mohammed bin Zayed al-Nahyan as he plays host to leaders and delegations from the Gulf Cooperation Council countries at the White House in Washington May 13, 2015. - REUTERS/Jonathan Ernst

The United Arab Emirates (UAE) continues to top the list of Middle East lobbying spenders as it seeks to consolidate its status as one of America’s closest strategic allies in the region.

The Gulf nation spent $13.5 million last year — on par with 2014 — on an array of influence peddlers and public relations experts, according to a review of financial disclosures. The spending spree has helped the country cement its military partnership with the United States while heading off US-based threats to its world-beating airline industry.

The strength of the bilateral relationship was very publicly confirmed this month when the Barack Obama administration announced the transfer of 15 detainees from the Guantanamo Bay prison in Cuba to the UAE. That’s the largest single transfer to date as Obama races to empty the controversial prison before his term is up despite fierce Republican opposition in Congress.

“The United States is grateful to the government of the United Arab Emirates for its humanitarian gesture and willingness to support ongoing US efforts to close the Guantanamo Bay detention facility,” the US Department of Defense said in an Aug. 15 statement announcing the transfers. “The United States coordinated with the government of the United Arab Emirates to ensure these transfers took place consistent with appropriate security and humane treatment measures.”

Much of the UAE’s recent influence operations, dominated by the Camstoll Group ($6.5 million in fees in 2015) and the Harbour Group ($4.5 million), have been aimed at promoting the federation’s policies to defeat extremism and terrorism financing, lobbying records show. The Defense Department is convinced by the UAE’s seriousness on the matter and has allowed the UAE to command airstrike operations against Islamic State targets in Syria.

The UAE is also the first nation allowed to purchase the US military’s state-of-the-art Terminal High Altitude Area Defense (THAAD) missile defense system; the first batch of UAE officers and airmen graduated from training on the system in December. "This graduation is historic because it marks the culmination of the first foreign military to train on this very sophisticated weapon system," UAE Technical Assistance Fielding Team Deputy Capt. Joseph McCarthy told an Army reporter at the time.

To cement that partnership, the UAE is now seeking to obtain expedited consideration for weapons and munitions sales, UAE officials told the Congressional Research Service (CRS). Obtaining the same “Major Non-NATO Ally” status already enjoyed by Kuwait and Bahrain could be one solution, but the UAE would prefer “legislation that would declare the UAE a key US defense partner,” the CRS writes in its Aug. 16 report on US-UAE relations.

The UAE has also spent the past two years combating efforts by embattled US domestic airlines to renegotiate America’s Open Skies agreement with the Gulf carriers. Those efforts appear to have paid off, with the State Department reportedly showing no interest in opening official consultations with the UAE — and Qatar— to discuss whether their airlines have unfair competitive advantages over their US rivals.

The bilateral relationship hasn’t been entirely glitch-free, however.

The UAE for the past three years has shown interest in buying America’s latest generation fighter jet, the F-35, but the Obama administration has made it clear that wouldn’t happen until Israel integrates its own F-35s into its arsenal. The first F-35s destined for Israel were rolled out in June, and delivery is expected by the end of the year.

The UAE for its part has resisted the Obama administration’s overtures to Iran. Writing in The Wall Street Journal on the first anniversary of the nuclear agreement, UAE Ambassador to Washington Yousef al-Otaiba deplored the “half measures” the Obama administration has deployed to punish Tehran’s continued ballistic missile testing after the deal was inked.

“Sadly, behind all the talk of change, the Iran we have long known — hostile, expansionist, violent — is alive and well, and as dangerous as ever,” Otaiba wrote. “[…] Instead of accepting this as an unfortunate reality, the international community must intensify its actions to check Iran’s strategic ambitions.”

The UAE, the CRS concludes, “tends to be on the hardline of the spectrum within the GCC, even going so far as to rebuff a request by President Obama during the April 21, 2016, US-GCC summit to increase its diplomatic and economic engagement with Iran.” The assertion is attributed to “author conversations with UAE representatives” in May 2016.

Those same sources also told the CRS that the UAE refused Obama’s request at the same summit to increase financial support to Iraq, which has been hard hit by falling oil prices. That reluctance is explained by the Gulf states’ dim view of Baghdad’s ties to Tehran, according to the CRS.

In Libya, meanwhile, the UAE — along with Egypt — has supported anti-Islamist military leader Khalifa Hifter, who is close to the House of Representatives (HoR) government in the country’s east. The United States, however, backs the new UN-approved Government of National Accord, which the HoR voted to reject last week.