Ten years after the deposed Iraqi president's capture, Iraqi citizens are left with conflicting lessons from the Saddam Hussein era. 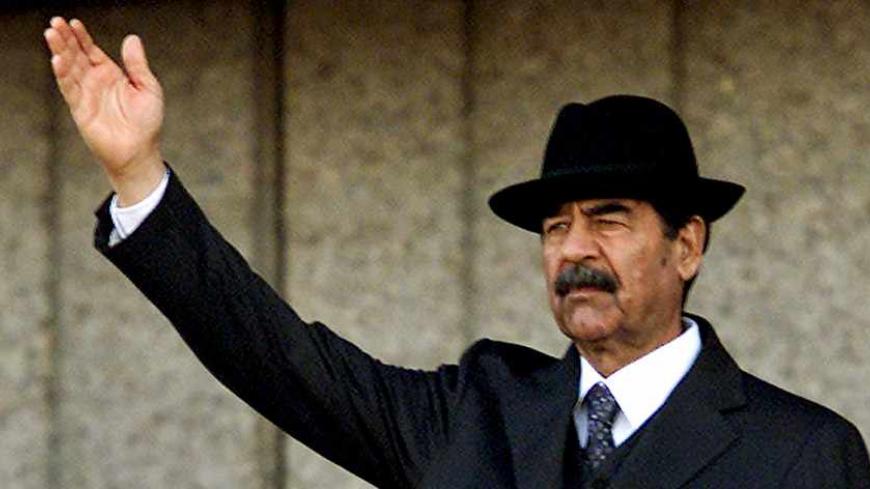 Dec. 13 marked the 10th anniversary of the apprehension of deposed Iraqi President Saddam Hussein at a farm near the town of Tikrit, during the “Red Dawn” operation by US troops.

Innumerable facts could be listed about the implications of this event and its aftermath. We could also discuss, ad infinitum, the fate that Hussein carved for himself and the whole country when he embroiled it in a series of frivolous and destructive wars that lay waste to its capabilities and caused great psychological and sociological damage to its population. We could also review the brutal past of Hussein’s regime and the horrific circumstances of its rule, reminding ourselves of the painful and bloody legacy that we inherited from the millions of innocent Iraqi victims.

But all these subjects seem irrelevant, for further evidence indicates that Iraqi history ended at that moment on April 9, 2003, when Hussein’s regime fell.

Ten years after the end of that era, it seems strange that Iraqis continue to be divided about its legacy. Some continue to strongly defend Hussein’s rule, and give the events that followed its demise as proof positive that the dictatorial approach adopted by Hussein was, in fact, the right one. Even worse, the intellectual elites that are supposed to form a vanguard in defense of democratic ideals now implicitly say that Iraq can only be ruled by a tyrant and that otherwise, its fate is to be partitioned.

The truth is that great similarities exist between those whose interests inflame their nostalgic feelings toward Hussein, and those who incessantly curse his reign, but still advocate the adoption of a dictatorial solution to deal with the consequences that followed his downfall. Caught between these two groups is a majority that absolutely rejects a return to Hussein’s methods, and believes that the solution to Iraq’s problems lies in overcoming his regime’s legacy instead of glorifying it and using it as an excuse to devastate the country’s present and future prospects.

Hussein was apprehended in 2003, but then what? Why do some still believe that his arrest and subsequent execution were an affront to a particular sect, instead of just and legal punishment for the mountains of transgressions attributable to Hussein, his regime and his cohorts?

The answer to that question is both complex and sensitive, for it's easy to overgeneralize. Moreover, the essence of our Iraqi crisis may be due to such overgeneralization. Yet there are limits that must be adhered to:

First, we have not sufficiently addressed the subject of Hussein’s reign to be able to forget it today. Proper treatment should have included a comprehensive and limited transitional period, during which that regime’s painful legacy would have been put aside and left for history to sort out.

Second, this deficient treatment of Hussein’s legacy gave opportunists and those who reject democratic ideals the chance to switch from championing a leader to championing a religious sect. This, in turn, inflamed the sectarian conflict and increased its destructiveness when Hussein went from a dictator who ruled by the sword to a leader and representative of a sect.

Even after his execution, Hussein will remain a hindrance to any real progress in Iraq’s march forward. This is not because he actually has any supporters, but because there are those who insist that his memory remains relevant, playing on the fears of his compatriots and exploiting the animosity and hatred that he engendered. Hussein’s real departure from the scene will begin the moment when Iraqis truly and wholly become convinced that the man died and his legacy was buried with him, and that everything relating to his era, crimes and wars has been properly settled to the satisfaction of all.