Seventeen years after the overthrow of Saddam Hussein, Iraq has neither a national day nor a national anthem. 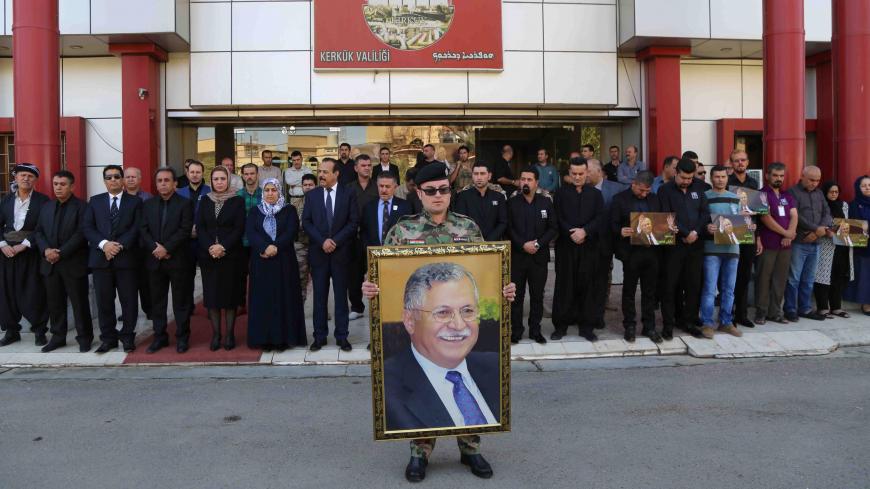 Iraqis gather in front of the Kirkuk province building in Kirkuk holding pictures of former President Jalal Talabani, a veteran leader of the struggle for Kurdish self-determination and a unifying elder statesman, on Oct. 4, 2017, after he died the previous day in Germany. - MARWAN IBRAHIM/AFP via Getty Images

BAGHDAD— It has been more than 17 years since the fall of Saddam Hussein’s regime, and yet, political forces do not seem to attribute any importance to national holidays or a national anthem. Such symbolic national elements could help unite Iraqi society around one national identity based, say, on dates marking major events and challenges their parents and ancestors underwent and overcame through their solidarity.

Paradoxically, according to a high-ranking official in the Iraqi Ministry of Foreign Affairs, “Many countries still send congratulation letters to Iraqi officials on the occasion of Iraq National Day on July 17, the anniversary of the Baath Party’s ascent to power in 1968. It was the recognized national day during the Baath regime’s era.”

Determining the national day has been a topic of debate in Iraq since the fall of the Baath regime. The Iraqi Governing Council, which took over power from Iraq’s civilian administrator, Paul Bremer, declared the day of Baghdad's fall on April 9, 2003, a national day. Objections led to the cancellation of celebrations on that date, as while it represented the fall of Saddam’s Baathist party it also stood for the occupation of the country by foreign forces.

It recently appeared that Oct. 3 was on its way to becoming Iraq's new national day.

On that date in 1932, Iraq achieved independence from the British mandate and simultaneously became a member of the League of Nations.

In early September, the Cabinet decided to prepare a national day draft law for Iraq and chose Oct. 3. While this had previously been chosen as the date to celebrate in 2007, the parliament never passed the proposal.

The choice of Oct. 3 was the result of deliberations between the Ministry of Culture and intellectuals, writers and experts in history and sociology. They wanted to pick a day that does not irritate any religion, nationality or sect, and that represents the symbolic unity of Iraqi society.

On Sept. 22, the parliament completed the first reading of the national day draft law, but it postponed the second reading that had been scheduled for Sept. 27.

Despite the lack of action by parliament, many Iraqis exchanged "national day" greetings Oct. 3. Several Arab singers and actors joined in, sending out greetings on Facebook and Twitter and wishing Iraq a better situation.

While various reasons were put forth for the lack of action from parliament, Culture Minister Hassan Nazim said the delay came at the request of the Patriotic Union of Kurdistan (PUK).

Oct. 3 is also the day that Jalal Talabani, a PUK member who served as president of Iraq from 2005-14, died in 2017. Talabani is a symbol for Kurds in Sulaimaniyah province, and he is a political icon who defied Hussein’s regime for decades.

Rebwar Taha, a PUK member of the federal parliament, said his party “had reservations regarding setting Oct. 3 as a national day because it coincides with the death of Talabani. Such a day must be a mourning day because Talabani was a national leader described by the supreme religious authority in Najaf as the safety valve.”

Nazim told local media outlets, “Work is currently in progress to resolve the problem with the Patriotic Union of Kurdistan.” He said, “The national day date does not conflict with the commemoration of national icons.”

But Taha told Al-Monitor, “Kurdish forces all sympathize with our refusal of this date specifically as a national day. Discussions are underway to pick an alternative.”

Taha spoke of three dates as alternatives to Oct. 3, but did not specify them.

Member of parliament Fares Brikfani of the Kurdistan Democratic Party (KDP) told Al-Monitor, “Opinions about the national day date are positive, but the parliament decided to postpone its ratification to widen the discussions. This is an important aspect, and the law must be developed in a way that pleases all Iraqis.”

Brikfani added, “The parliament consists of members from different nationalities, sects and ideologies, and any law will prove disputable. In the end, only the laws that receive the approval of the majority in parliament will pass muster.”

Ahmed al-Kinai, member of the Fatah Alliance, said the matter still "is under discussion in parliament, after the completion of the first reading.”

He said parliament has found compelling reasons to determine a national day for Iraq, noting, “It raises the awareness of future generations to the importance of this date.”

Meanwhile, Iraq also has not passed measures to establish a national anthem or a flag law.

The president of Iraq is Barham Salih, long a PUK member. Under the power sharing system in Iraq that has been in force following the US invasion in 2003, Kurds hold the presidency, and all three presidents during that time have been PUK members. Talabani and the PUK broke away from the KDP, long led by the Barzani family, in 1975.