As the term of Kurdish President Massoud Barzani is drawing to an end and as the transfer of power is still unknown, some political parties are suggesting a new parliamentary system whereby Barzani would have a mere ceremonial role. 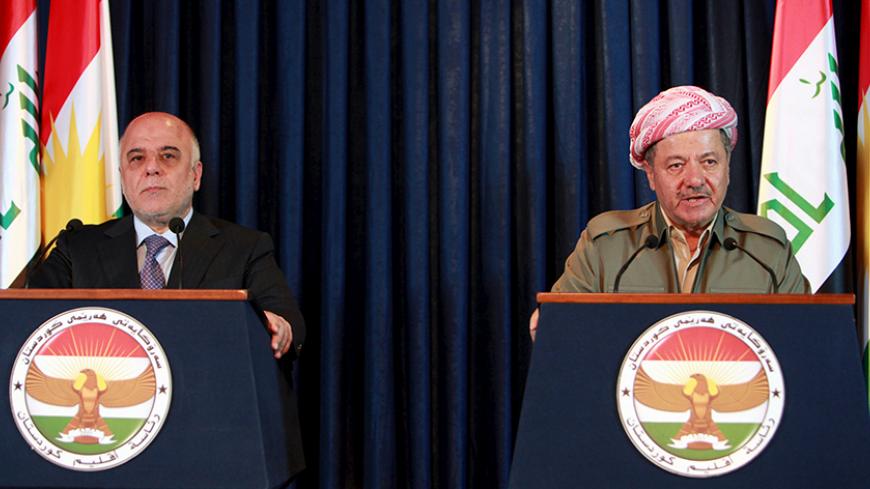 ERBIL, Iraq — As the tenure of Iraqi Kurdistan's President Massoud Barzani is coming to an end soon, the question of transfer of power has divided Kurdish political factions and threatens to destabilize the Kurdistan Region of Iraq amid an ongoing war against the Islamic State (IS).

Barzani has been president for 10 years. When his term was about to end in June 2013, his Kurdistan Democratic Party (KDP) and then-ally Patriotic Union of Kurdistan (PUK) — led by former Iraqi President Jalal Talabani — agreed to extend his term via a parliamentary motion for two years.

The legal provisions introduced in June 2013 to extend Barzani's term explicitly state that the president's tenure will not be prolonged for more than two years. This two-year period will end on Aug. 19.

However, with just three months left to the end of Barzani's term, there has been no breakthrough yet as to how to resolve the legal and political dilemma of whether a power transfer will take place or who should hold the office of president after the August deadline.

"From our perspective, Barzani no longer has the right to retain the office of president," said Rewaz Fayaq, the head of the PUK's 18-member bloc in the Kurdistan parliament, which has a total of 111 seats. "For him to stay in office it would need amending the presidency law and that is impossible," she told Al-Monitor.

Barzani's presidency and its extension was made possible by a power-sharing deal between his party and the PUK, whereby Barzani became the president of Iraqi Kurdistan and Talabani became Iraq's president.

Fayaq argues that the deal no longer stands, and the fact that a leading PUK figure, Fouad Massoum, became Iraq's president last summer with support from the KDP and other Kurdish parties has nothing to do with the power-sharing agreement between the two parties. According to Fayaq, it was because of the PUK's status as the second-largest Kurdish vote-getter in the Iraqi parliamentary elections in 2014.

Now, Kurdish parties strive to avert a crisis instigated by this issue at a time when their region is surrounded by conflict to the south and west.

According to the Iraqi Kurdish presidency law passed in 2005, if the president's seat becomes vacant, then the speaker of parliament should take over the president's duties and a new president should be elected within 60 days.

At the center of the debate around the question of the presidency is the nature of the political system in Iraqi Kurdistan and whether or not Barzani can run for the post again after 10 consecutive years in office.

Barzani himself said earlier this month that he will honor whatever decision the Kurdish parliament and political parties agree upon regarding his presidency.

Other parties have not yet shown any willingness to challenge Barzani by putting forward possible candidates for the job.

Right now, the president is the top executive and most powerful official in Iraqi Kurdistan. In the Kurdish system, which critics dub presidential or semi-presidential, the parliament has very little oversight powers or ability to challenge the president. For instance, Barzani's KDP has 38 seats in the 111-member parliament, meaning the 83-seat threshold needed to unseat him will be impossible to achieve.

Many argue that given Kurdistan's diverse political landscape where no force has an outright majority to run the government, a system with a strong president will not succeed.

"We believe the best form for Kurdistan is a parliamentary democracy where the president only has ceremonial powers," Rabun Maruf, a parliamentarian from Gorran (Movement for Change) — a party that was until last year the major Kurdish opposition group and still a vocal critic of the political system in Iraqi Kurdistan — told Al-Monitor.

Maruf and other opponents of a presidential system contend that a parliamentary system will be more suitable to accommodate different groups and prevent major powers from being concentrated in one person's hands.

While the presidency law demands that new elections be held after August, the KDP is attempting to reach a negotiated solution with other parties.

"It's not a matter of personalities and Barzani," Mohammedali Yaseen Taha, spokesman for the KDP's parliamentary bloc, told Al-Monitor. "The situation in [Iraqi] Kurdistan and Iraq does not allow us to have presidential elections," Taha said, referring to the ongoing conflict between Kurdish peshmerga and IS forces, as well as a sharp economic downturn caused by budget disputes with Baghdad.

"Taking this situation into consideration, the law [passed in 2013] for extending [Barzani's term] can be amended again and this is an option," he added.

Al-Monitor spoke on condition of anonymity with non-KDP politicians, who unanimously rejected that their parties will agree to Barzani retaining his office for another term or prolonged period. Taha, however, argues that such a view is only "political rhetoric" meant for public consumption. He suggested those parties might change their position at the negotiating table.

As parties debate how the controversial question of Iraqi Kurdistan's presidency be resolved, the parliament has formed a committee to revise a draft constitution for the region that was passed in 2009. A major source of contention in the draft is the extent of the president's power versus parliament or the prime minister.

"We might have one or two months of legal vacuum [before the draft constitution is agreed upon], but then we can resolve the matter and this is most preferable to us,” Galali told Al-Monitor. He heads the Komal bloc in the Kurdish parliament and believes a system where the parliament can truly hold the president and other executives accountable is most suitable for Iraqi Kurdistan. "[Without a solution], the situation will head toward a crisis and result in a [prolonged] legal vacuum,” he said.

As slow talks among Kurdish parties to find a solution for Iraqi Kurdistan's presidency drag on, some speculate a compromise might be reached by the stakeholders to avert a major crisis.

"I think the KDP will accept a parliamentary system in return for Barzani to stay in office. They will agree to fewer powers [for Barzani] but will not accept a mere ceremonial role," Kamal Rauf, a prominent local journalist and commentator, told Al-Monitor.

"What is notable is that political factions do not trust each other and do not appear to believe in peaceful transfer of power, and the war against IS has been invoked as a pretext for all this," Rauf said.

Given a history of internal Kurdish conflict, many like Rauf are concerned that a failure to resolve the matter via consensus might lead to heightened tensions among Kurdish groups and even division of Iraqi Kurdistan's territory along factional lines, as was the case in the 1990s when the KDP and PUK fought a civil war.