The Omani stance may force the kingdom to pause in its regional policies. 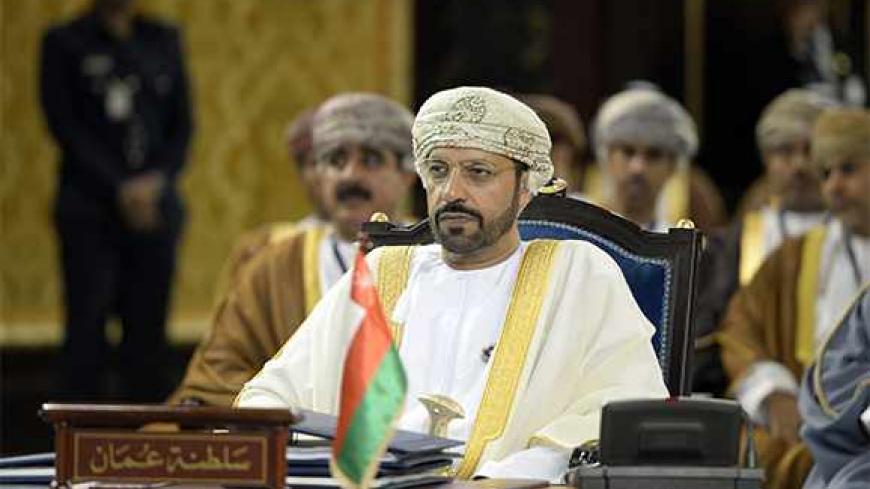 Saudi Arabia’s proposal to move the Gulf Cooperation Council (GCC) toward unity received a blow during the IISS Manama Dialogue Forum, held Dec. 7 ahead of the council meeting in Kuwait, where ministers plan to discuss the issue.

Omani Foreign Minister Youssef bin Alawi surprised the audience when he bluntly declared that his country is against the union and will withdraw from the new body unless it sees the light. Oman had previously expressed its rejection of the Saudi proposal in 2011 but the minister’s recent statement came at Saudi Arabia’s worst moment, when both international and regional power shifts are increasingly eroding the Saudi position. Alawi’s statement shattered the illusion of cooperation and the chances of Gulf unity at a time when Saudi Arabia is desperate to regain its stature, at least among its Gulf neighbors.

The direct language of the Omani minister is not something that Saudi Arabia is used to, especially coming from its close partners in the GCC. The statement added insult to injury after it transpired that Sultan Qaboos bin Said of Oman facilitated a secret dialogue between the United States and Iran that culminated in the recent Geneva agreement, which is resented by Saudi Arabia. For a long time, Oman resisted following the confrontational Saudi position with Iran or other Arab countries that Saudi Arabia deemed threatening, such as Syria. It is not known to have openly interfered in the internal affairs of other neighbors, supported dissident groups or exported ideology abroad. Oman remains a solid ally of Western powers that can be relied on at times of crisis. Its apparent neutrality is driven by its own internal history, culture and engagement with the outside world.

Unlike Saudi Arabia, Oman is a truly pluralistic society with multiple ethnic and religious groups coexisting in relative harmony. While it recently experienced demonstrations centered on local economic and political grievances, there was no severe sectarian tension or ethnic rivalry. The Omani mosaic is very old, a product of the country’s historical transnational connections with both Africa and the Indian subcontinent.

The rising sectarian tension across the Arab region and in the Gulf itself must worry a country where Sunnis, Ibadhis and Shiites have always been part of the religious makeup. Arabs, Zanzibaris and Baluchs peacefully coexist not only at the social level, but as part of the government apparatus. Each community plays an important role in commerce, the military and security forces. An Omani identity is forged out of diversity and pluralism and is not conceived as the domination of one group over others. Subidentities remain alive, but they have not been politicized to disrupt the unity of the country. The climate of sectarian escalation or ethnic tension in the Gulf region threatens to undermine the very foundation of Omani society. Oman, therefore, cannot afford to back any Gulf unity project that may appear to be directed against Iran and may have serious impacts on its internal affairs.

Oman also worries about the recent sudden aggressive foreign policy of its small but wealthy neighbor, the United Arab Emirates. Since the Arab uprisings, the UAE had moved from being a neutral player, always seeking reconciliation, to an engaged force, using its oil wealth to influence the political scene in countries like Egypt.

Oman is disadvantaged in this regional context with the dwindling of its own oil resources and rising unemployment. Its youth have always sought work abroad, sailing from the interior of the country to the East African coast, establishing communities and even ruling over African territories. They have also found employment in other Gulf countries since the 1970 oil boom but from their perspective, Gulf cooperation has not truly led to greater economic integration and real open labor markets for their own nationals. In 2011, the GCC pledged financial support worth $10 billion to Oman after demonstrations erupted in Omani coastal cities.

Yet, Oman may not be as desperate as other Arab recipients of Gulf aid. It can afford to maintain its neutrality and even openly reject the unity project under the auspices of Saudi Arabia. The much desired Gulf economic integration cannot come with greater political unity, as the latter may undermine Oman’s ability to remain neutral in any future regional conflict with Iran. Oman must have felt secure enough to facilitate a secret dialogue with Iran, Saudi Arabia’s archenemy. The political role it has recently played may lead to economic engagement with Iran that has the potential of compensating for any loss from GCC sources.

Oman remains on the Arab side of the Gulf not only in terms of geography but also in spirit and culture. It can certainly distance itself from confrontational Saudi rhetoric and sectarian projects while remaining an integral player in GCC politics, regardless of whether this moves from cooperation to unity. Oman was wise enough not to be enthusiastic about a unity project directed only against an external enemy, as it recognized early on how this may simply compound problems in the Gulf without the prospect of peaceful coexistence with Iran. It chose diplomacy over confrontation in an attempt to maintain its position as an independent player who hesitates to be drawn into other country’s hypothetical wars.

Tomorrow, Dec. 10, the GCC summit will not discuss unity to avoid further schisms and maintain the veneer of cooperation. Yet, this regional body may seem an anachronism now that several member states have expressed either reservations or clear rejection of the proposed unity. More than 30 years after its inception, the GCC needs to be reimagined along different lines. It cannot continue to operate if its raison d’etre is simply forging unity against Iran. While Saudi Arabia continues to cherish this objective, other small states may prefer peace to war. It is likely that other Gulf states will follow Oman’s steps, given that the United States has made it clear that containing Iran is better than opposing it. Saudi Arabia may find itself increasingly sidelined while other GCC countries pursue their own projects of living peacefully with their Iranian neighbor, and reaping the benefits of greater economic and financial cooperation. Their new policy will be easier to implement as politics in all GCC countries are not driven by ideological or sectarian agendas, with the exception of Bahrain. Other GCC states cherish their economic prosperity and are not willing to undermine their own interests by raising the flag of religious wars.

It is time for Saudi Arabia to listen to its own neighbors and even abandon grandiose projects and expansionist agendas that so far have polarized the region and threatened peace in pluralistic societies that cannot afford to continue to be dragged into narrow and aggressive sectarian projects. Saudi Arabia must realize that the region’s ethnic and sectarian pluralism cannot be easily homogenized, although it can be politicized with serious consequences. Pluralistic societies where equality is guaranteed for all tend to be vibrant, energetic and creative, adding not only colorful culture to a monotonous landscape, but real economic prosperity and entrepreneurial talent. Well-managed diversity can be a source of strength rather than weakness. It must also realize that economic competition and political rivalries can be managed, but religious wars are often long and exhausting for a simple reason: The sacred cannot be easily divided.